People colloquially called the C/K the “Square Body” for its boxy design. And in fact, the third-generation C/K featured a computer-designed body with more space and comfort than ever before. Also, the truck was bigger and tougher due to the new platform, revised suspension, and tougher axles (via Chevrolet).

Customers had numerous cab configurations, special editions, engine options and details to choose from too. All of that made the third generation C/K one of the best trucks in the world at that time. Chevy produced it from 1973 to 1991 in the USA. However, also built this model in Argentina, Chile, Mexico and South Korea. During the long production run, Chevrolet introduced the diesel engine as an option, which proved to be highly popular in Europe and South America. Today, most of the trucks are worn out, but well-preserved examples are fetching high prices as people remember these utilitarian trucks.

The 3000 GT is another ’90s legend mainstream sports car enthusiasts have forgotten, which is a shame. With its pop-up headlights, rear panorama glass, and big spoiler, the 3000 GT screams early ’90s car design (via Auto Evolution).

But there is much more about this car than its contemporary nostalgia since this is one serious driving machine. Under the hood is a 3.0-liter twin-turbo V6 that pumps out 300 HP, sending power to all four wheels over an intelligent AWD system.

Ford started offering the Bronco in 1966, but in 1979, they introduced a new generation that was sold until 1986. Along with the Chevrolet Blazer, the Bronco is the quintessential American compact SUV of the ’80s. Like all cars of this market segment, the Bronco was a tough and well-engineered SUV built on a truck chassis with heavy-duty components (via Bronco Bastards).

Customers used most Broncos as off-road vehicles or law enforcement transportation, which explains why well-preserved examples are so rare. And rare means expensive, so if you want to own a proper Bronco, drivers should act fast.

If you know anything about Japanese sports cars, you know the RX-7 has a special place in the nomenclature of performance cars from the “Land of the Rising Sun.” The reason is the engine. In contrast to all the other cars on the market with conventional piston engines, the RX-7 has had a rotary Wankel engine since the beginning (via Evo).

The third generation, which they presented in 1992 and discontinued in 2002 delivers from 252 to 276 HP. Also, it has a vivid performance thanks to its small weight and perfect balance. Better yet, they are still affordable, so hurry up and buy one before the prices soar.

When you think of the best car of the 1990s, this car that stands out. These SL roadsters were always fantastic driving machines and ultimate Stuttgart classics. But, the R129 was the symbol of the decade as well as the automotive personification of success, power, speed, and quality.

Today, fast SUVs are nothing special, but in the 1990s, they were extremely rare and obscure. However, Jeep produced one that will be a collector’s item in the near future. This is the 1998 5.9 Limited, a one-year, top-of-the-line model. Jeep equipped it with every luxury item they had to offer as well as the 5.9-liter Magnum V8 delivering 245 HP (via Motor Trend).

Although 245 HP doesn’t sound like much today, it was a lofty number for a late 1990s SUV. The Grand Cherokee 5.9 is kind of a Jeep hot rod before those modern SRT versions with powerful Hemi engines. They only made about 15,000, so the 5.9 Limited is a definite future classic.

In 1983, Chevrolet decided to re-introduce the SS trim level on the 1983 model. They continue to offer this option until 1988 with great success. The mid-1980s Monte Carlo was one of the coolest two-door coupes of the period although the performance wasn’t exhilarating (via Motor Trend).

Under the hood was a 305 V8 with 180 HP they mated to slow automatic transmission. What the SS lacked in performance it made up with its looks and reputation. In its five-year production run, Chevrolet built over 180,000 of those sleek coupes.

In most cases, the Eclipse was just an attempt from Mitsubishi to introduce a sports coupe. They built it on a regular car platform and shared engine and front-wheel drivetrain with the rest of the Mitsubishi lineup. However, there was one special model from the 1990s, which was highly respected and worth looking for (via Get Jerry).

Although there’s been a recent rise in prices, the Fox-body Mustang Cobra flew under the radar of mainstream collectors for quite a while. Most people tend to dismiss it as another Fox-Body Mustang, but the Cobra is much more than just that. It is a proper performance car, blurring the line between classic muscle car and sports coupe. Sadly, they produced it for one year only in 1993, marking the end of the Fox-body Mustang generation (via Mustang Specs).

Under the hood was an SVT-prepared 5.0-liter HO engine with trick GT40 heads and various other upgrades. The 0 to 60 mph time was well under six seconds and the 1993 Cobra handled perfectly thanks to the revised suspension. Ford made just 4,993 examples in 1993, so you should buy one before they become Shelby GT350s of the 21st century.

The SLP Firehawk was an interesting late muscle cars. The model first appeared in 1995, marking the start of a successful venture between GM and the Street Legal Performance Company from New Jersey. This was an outside firm that produced performance kits for Firebirds (via Zero 260).

However, the cars weren’t just improved base models and were much more. The SLP Formula Firehawk had a 5.7-liter V8 engine with 300 or 315 HP, which was a lofty number for 1995. The six-speed manual version could accelerate from 0 to 60 in 4.9 seconds, making it one of the fastest production cars in America. The package cost $6,500 over the price of the regular Trans Am. It included numerous upgrades and a Ram Air hood, and it was well worth it. Today, Pontiac is no longer around, which means thoroughbred muscle cars from this company will just go up in value.

The CTS is a mid-sized Cadillac sedan with the performance V option. Arguably the most successful was the second generation produced from 2008-2014. Under the hood was a supercharged 6.2-liter V8 delivering 556 HP, making the CTS-V the most powerful performance sedan on the market (via Edmunds).

Back in the early 1990s, Subaru wanted to enter the sports car market to promote their biggest assets, all-wheel drive and flat-six engines. So, the company hired Italdesign to design a sleek and modern coupe. In 1991, the SVX debuted with strange styling like its complicated side window patents (via Cars).

However, it offered sublime handling and a great performance. Under the hood was a 3.3-liter flat-six that propelled this rare car to a 7.3 second 0 to 60 mph time. But sadly, they only sold about 14,000 in America until 1996.

Produced from 2004 to 2006, Dodge Ram SRT-10 is one of the craziest, fastest pickups they ever built. That itself is a hard thing to say since Dodge always had some wild, unique versions of their trucks. But, just look at the specs. The 8.2-liter V10 engine produced over 500 HP, with 0 to 60 mph time of fewer than five seconds. However, its fuel economy was in the single digits (via Car And Driver).

Top it off with a bright red or yellow paint job, two white racing stripes, and big shiny chrome wheels, and you get the idea of what the SRT-10 is all about. It was something you couldn’t miss if you saw it on the street. Of course, with the price tag of over $45,000, the SRT-10 wasn’t exactly a sales hit. But they produced a decent number of them in its three-year production run. 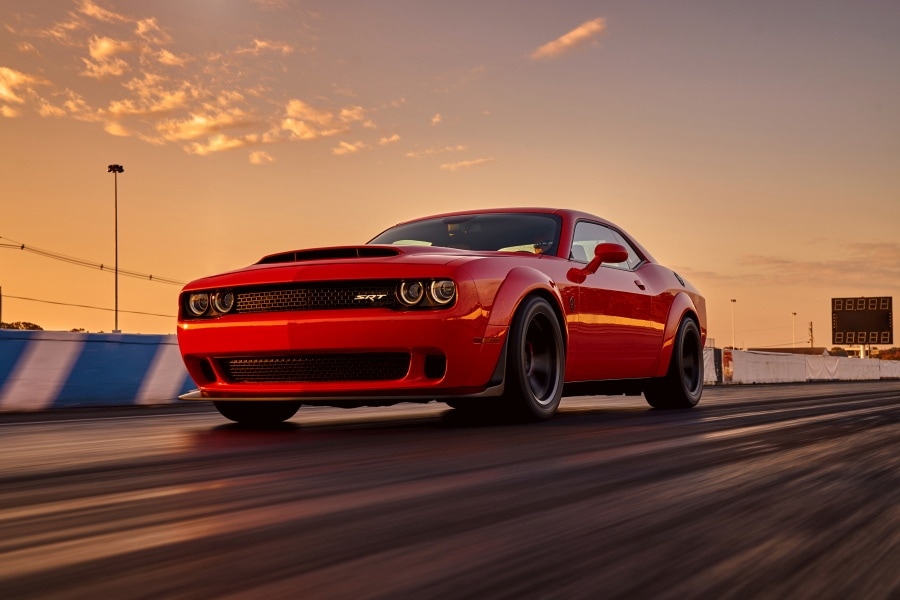 If for any reason 707 HP from the Hellcat package is not enough and you want the ultimate modern muscle car with the most powerful street Hemi engine, the Demon package is for you. With standard fuel, it delivers an insane 808 HP. However, if you use the high-octane stuff, it will pump out almost 840 HP (via Car And Driver). 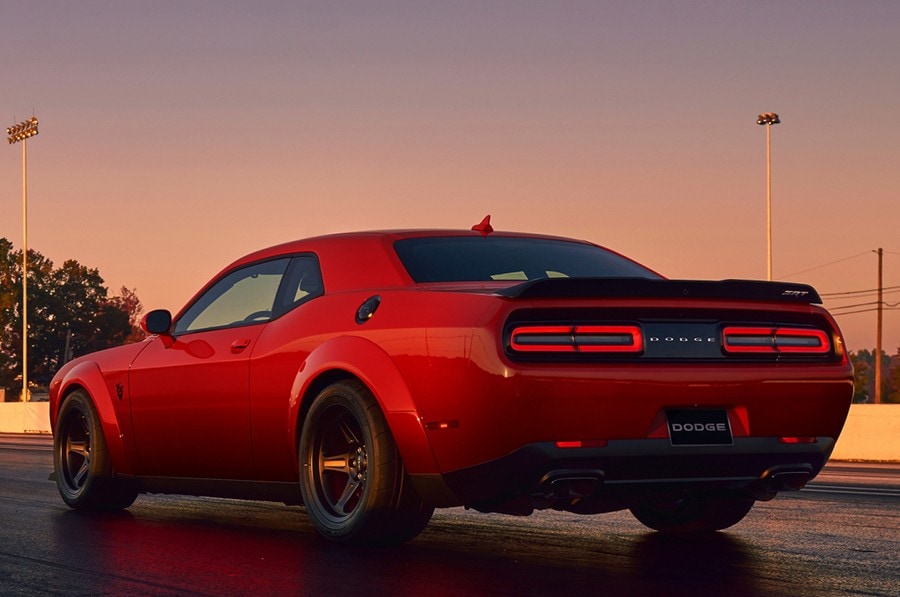 The rest of the Demon package is equally insane from a special transmission, suspension, and brakes to the wide-body stance and exterior details. The acceleration from 0 to 60 is less than three seconds. Under full power, the Demon will accelerate with 1.8 G force, which is faster than being dropped off a cliff. The car can cover a quarter-mile sprint in less than 10 seconds straight from the dealer.

They discontinued the last-generation Viper in 2017 due to slow sales. But a car like a Viper wouldn’t go without a fight. The last special edition they presented was the 2016 Viper ACR. It was the best and one of the fastest track-ready cars in the world. As you already know, those ACR Vipers were always a car purist’s dream (via Top Gear).

As specially-prepared road/track cars with immense possibilities, they have sublime handling and performance. The secret of the ACR Viper was a slightly more powerful engine with 645 HP and a significant weight loss. They topped all that off with a perfectly balanced chassis, race tires and powerful Brembo brakes. Unfortunately, at $120,000, it wasn’t a bargain by any means, but it was worth every cent.

The 2015 M2 is one of the best cars on the planet combining BMW’s driving dynamics, proven German quality, and M Power heritage. It is also the modern-day equivalent of the legendary 2002 Turbo, as well as a classic German muscle car. To create the M2, BMW took the compact platform of the 2 Series model, and added a performance-tuned suspension, a wider track, and a 365 HP 3.0-liter turbocharged straight-six engine (via EVO).

As you would expect, the result was fantastic, making the M2 is the true Autobahn missile of the highest order with a 4.1-second 0 to 60 mph time and a top speed of 168 mph. Also, as a nod to classic performance cars, the new M2 is available as a six-speed manual. That is the version you should get if you consider yourself a true car enthusiast. For the 2018 model year, BMW slightly upgraded the M2 both mechanically and cosmetically with a new grille, sharper handling, and a slight bump in power output.

Ever since the first retro Mustangs appeared in showrooms across America, Ford fans have asked for the return of the Boss 302. For those who don’t know, the Boss 302 first debuted in 1969 as a racing car homologation special they intended for the Trans-Am races. Fast-forward 43 years and Ford revived the Boss 302 with a new 5.0-liter Coyote V8 that delivered 444 HP and 380 lb.-ft of torque (via Motor Trend).

Again, this was almost a pure racing car with no back seats and a factory-installed roll cage, as well as a host of other external and internal modifications. As you’d expect, the performance was better than a regular Mustang GT. In fact, the 2012 Boss 302 could accelerate to 60 mph in 3.97 seconds and top 155 mph.