Home Cars Remembering The 25 Worst Chevrolet Cars Ever Made
Cars

Remembering The 25 Worst Chevrolet Cars Ever Made

Ford had a disastrous time selling the Pinto, and across the way, GM had exactly as incapable of a time with the Vega. Interior quality for the Vega was awful. But aside from that, there was worse (via Macs Motor). The reliability of the Vega was almost laughable. These things would break down a ton and repairs were problematic. Gas mileage was the mission of the Vega, in exchange for lackluster performance.

The Vega is also prone to frame and body rust, a problem many cars from the same era faced. Vega owners looking for cheap transportation got more than they could chew with this lemon. Sales of the Vega were poor, and the car was eventually replaced by a new model. Chevy suffered from many terrible car designs in the years that ensued. The brand never did get the compact car all the way right, unlike how its foreign rivals did.

No, the Chevette isn’t a Corvette. The Chevette was another attempt at a profitable small car from GM. The end result is it was lacking in many of the same areas as the Vega. Interior quality was below normal expectations for a new car (via The Truth About Cars). Drivers often reported dials falling off, rattling, and worse. When you buy a new car, you don’t expect to put up with these kinds of issues.

Then you had the lethargic performance of the Chevette. The car didn’t live up to expectations. Drivers were looking for some type of performance, at least being able to merge onto the highway. The Chevette let drivers down in almost every area of its design. Looking back on the Chevette, it’s hard to imagine where GM went with this car.

Enthusiasts have hoped for a revival of the El Camino for decades. Chevrolet teased a revival with the SSR, which had a similar design. Sadly, the SSR’s production model fell short in many areas. The styling, while like the El Camino, was a far cry from the car of the past. The truck bed on the SSR was almost worthless due to its bed cover (via The Truth About Cars). Then the styling with the bubble front clip looked like a roadster lost.

We’re not sure what GM was going for with the styling of the SSR. Its performance was alright thanks to the V8 powerplant, but from a practicality standpoint, the SSR fell short. Maybe something with a Camaro-themed styling might have proved to be a more popular option. GM had many weird designs coming out around the same time as the SSR. Most enthusiasts took a pass on the SSR, especially with its high price tag.

Another Camaro to grace this list is the Iron Duke. What exactly was the Iron Duke you might ask? Well, after the fuel prices had gone through the roof, GM decided to sell a Camaro with a four-cylinder engine (via Auto Blog). By today’s standards, that isn’t a bad thing but in the 1980s it was unheard of. The Iron Duke did horribly, not only because buyers didn’t want it, but also because of a lack of power and reliability. 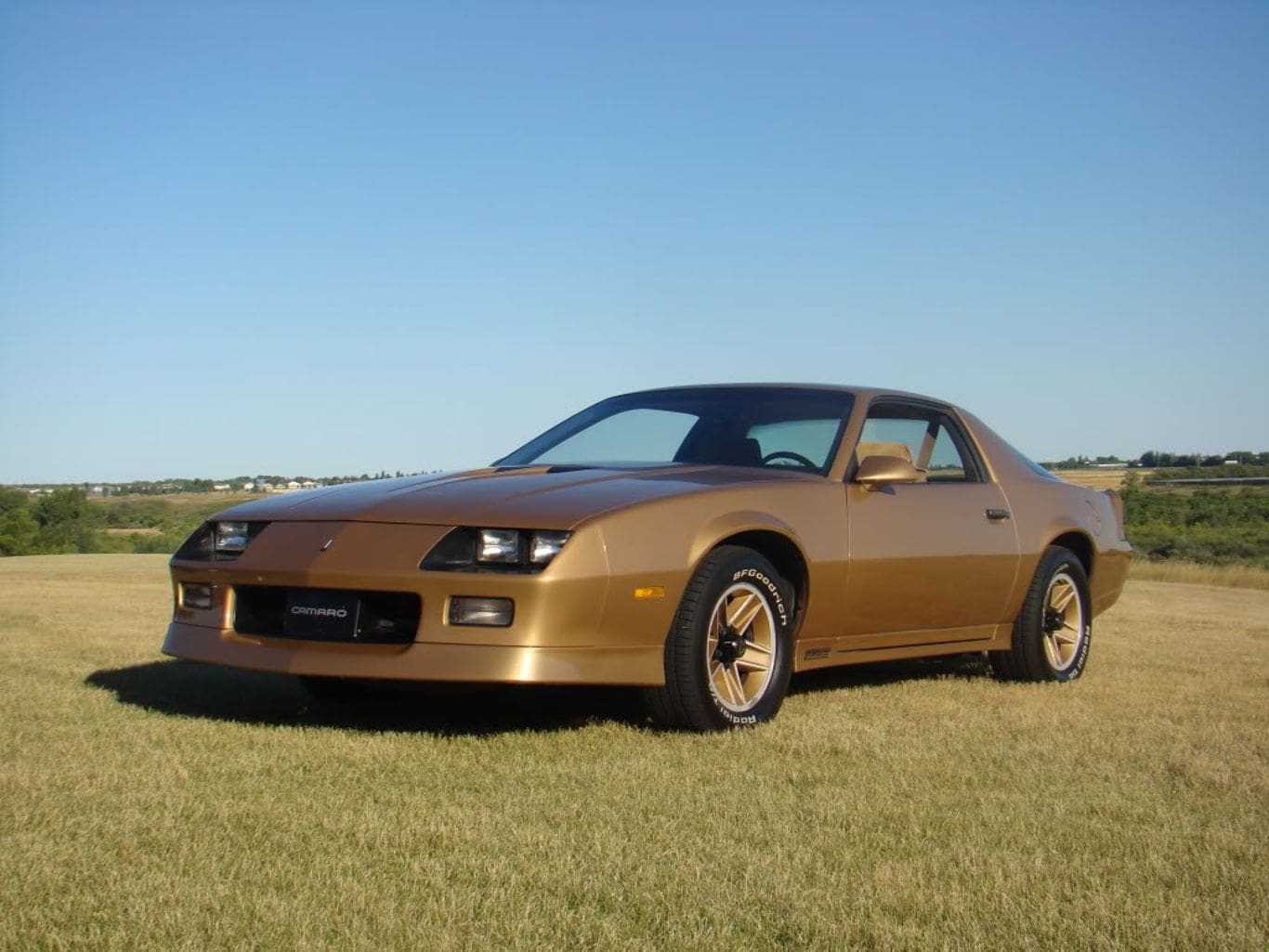 GM and Chrysler were both friendly with Japanese automakers in the late ’80s and early ’90s. Chrysler had a partnership with Mitsubishi, dubbed Diamond Star Motors, and GM had a relationship with Suzuki and Toyota (via Car Bibles). The Toyota partnership produced an unusually small car called the Nova. Taking the nameplate from the Nova of the past, GM brought us their own version of the Corolla.

The car was criticized for defecating on a legendary name like the Nova. Although it was the usual high-quality Toyota product, critics still panned the small car. Instead of keeping the excellent Toyota radio deck, GM swapped it with a Delco unit. On top of that, the service department at GM was not as keen on repairing the Nova as an actual Toyota dealership.

American automakers were having a tough time adjusting to new emissions regulations in the late ’70s. The Corvette, once a focal point of performance, suffered from these unfortunate changes (via Edmunds). For five years, the Corvette felt like it was being choked out. The 5.7-liter small-block V8 made a measly 250 hp. That was small potatoes compared to other sports cars at the time or even previous Corvette models.

It ultimately took several years for the brand to recover from these changes. As it stands, the 1975-80 models are some of drivers’ least favorite. Insufficient performance is a real turnoff for most potential buyers. Even restoration can be expensive, and adding a modern engine will be even more.

After a decade of selling a less-than-satisfactory Monte Carlo, Chevy introduced a V8 model again. A slight redesign of the 2000-05 model, the newly-minted Monte Carlo was ready to play with the big boys (via Top Speed). Unfortunately, this was during a transitional period for GM,as well as the impending recession.

The Monte Carlo was lacking in the style department with a soft-looking front fascia shared with the Impala. There was a noticeably absent manual transmission option. The V8 engine itself was seemingly powerful enough for daily driving, but nothing sensational. GM missed the mark with the final generation of the Monte Carlo. The car could have been something special, but instead was lacking in many departments.

GM did much research and development in the 1990s as it sought to replace the Camaro. The Beretta was the car the company launched to do this (via Best Ride). They even went as far as using the Beretta as the platform for NASCAR racing. But the Beretta didn’t exactly enlighten consumers. The car lacked any of unique styling and performance was subpar at best.

There was the fact that the Beretta shared much of its underpinnings with cheaper GM cars at the time. The celebrity and Corsica come to mind when you think of the Beretta. There was nothing remotely special about the Beretta, and it was quickly shelved. The Camaro lived on until the 2002 model year when it was discontinued, only to return in 2010.

The Corsica is the most basic car ever made. During the later part of the 1990s, you’d see the Corsica at every car rental place there was. The quality was lacking in almost every department (via Motor Biscuit). The Corsica drove like a soda can on wheels, with rattling parts both inside and out. Reliability was uncertain at best, with all sorts of repairs commonplace.

The Corsica was also one of the cheapest new cars sold in America. However, the cheap price only unfolded into many problems for new owners. When a cheap, unreliable car comes to mind, the Corsica is probably at the top. Chevy had a few duds in the 1990s, and the Corsica was one of them.

Taking a look at this minuscule monstrosity makes you realize why GM went into bankruptcy in the first place. What an odd and useless car the HHR SS panel van was (via Motor Biscuit). It’s almost like a rogue designer got loose with the authority to authorize a project. The HHR itself was the PT Cruiser a full eight years too late. Couple that with the obscure and useless design of a miniature panel van, and you have what we have here.

The HHR SS Panel Van didn’t offer anything sensational in terms of performance. Why GM would even put it on the market is beyond us. Car shoppers around this time were more concerned with fuel economy than a unique panel van. Had the HHR hit the market an entire decade before, GM might have had a hit on their hands.

If there is one nameplate consumers yearn to revive, it’s the Caprice. Chevy’s full-size sedan offering had a loyal following. The Caprice PPV that hit the market in 2010 was not sold directly to consumers (via Auto Trader). The captive import from Australia was sold to police departments, and the car was based on the Pontiac G8.

The styling was lackluster and performance wasn’t breathtaking like enthusiasts had hoped for. Chevy sort of threw the Caprice nameplate in the wind with this generation. The former Caprice model used to have personality, the new one didn’t have any. In fact, it had that “generic” Chevy feeling that the brand had in the 2000s. Sadly, the Caprice was not the hit that GM had hoped for, and it was phased out with the Chevy SS in 2017.

After the Chevy Metro was phased out in 2001, the brand needed a subcompact car. The Aveo was brought into the mix and was based on a Daewoo model. The car advertised having a stellar interior room in a small package (via The Truth About Cars). That wasn’t entirely true, and the Aveo didn’t sell in the numbers the brand had hoped for. Reliability was questionable, as were initial safety ratings for the small car.

The Aveo would stay in existence for a while, ultimately being phased out with the Sonic. But when it comes to forgettable compact cars, the Aveo was about as forgettable as you can think of. There were much better models, including the Honda Fit. Chevrolet has since abandoned the compact car segment altogether as GM moves toward crossover vehicles.

Elon Musk sprang new life into the electric car segment when Tesla became more successful than any other electric automaker. Naturally, GM was passed up due to incompetence when the company abandoned the EV1. The Volt was an attempt to take Tesla’s market share (via Shift). Sadly, car shoppers didn’t resonate with the bubble-shaped Chevy model. Ultimately, there’s more to an electric car than simply being electric.

Chevy missed the memo when it came to styling and versatility. The fact that the Volt was partly gas-powered meant you still had to deal with the maintenance issues of gas-powered cars. The Volt was a costly failure for General Motors and the Chevrolet brand. Now, GM is working on new and more advanced electric car technology.

The folks at GM needed a way to sell more trucks, but customers were getting frustrated with the gas mileage. The Silverado Hybrid came along to change things up a bit. Unfortunately, the hybrid drivetrain used in the truck didn’t improve the mileage all that much (via (GM Authority). The Silverado Hybrid didn’t get much better gas mileage than the ordinary model. That meant buyers paid a premium for some hybrid badging, and that’s about it.

The gas mileage was not that much better than the regular Tahoe. But the cost was thousands more, and the truck was limited. The body kits and insufficient off-road capability limited the Tahoe Hybrid to pavement duty. Sales numbers for the Tahoe Hybrid were lackluster at best, and the SUV was ultimately a failure.