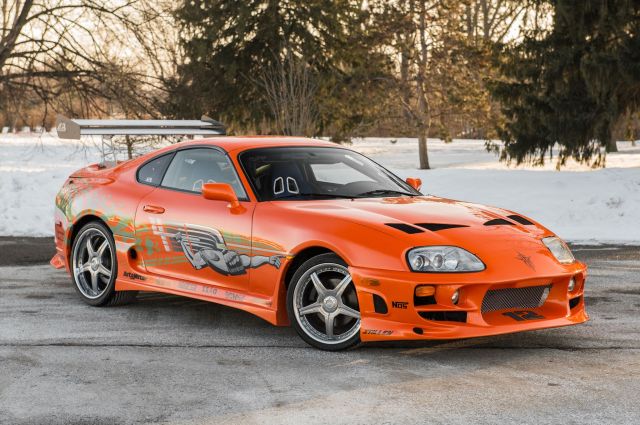 Another early icon from the F&F franchise was the bright orange Toyota Supra A80 with green decals. This car was an unforgettable part of the first Fast and Furious movie. The stock Supra A80 had an iconic 3.0L 2JZ-GE inline six engine that was either naturally aspirated or twin turbocharged. The power output ranged from 220 HP in the base to 320 HP in twin-turbo form. The latter had some respect-worthy numbers.

Having an endless tuning potential, it was easy to transform the Supra could into a true drag racing monster. That’s why it’s nearly impossible to find a stock example for sale. So, if you want the actual Paul Walker’s movie Supra, you should know that it fetched $185,000 at a Mecum Auctions event in 2015.

The car was one of 58 stunt cars in the movie, and as such, it has a heavy-duty suspension, full roll cage and strengthened fuel tank. Under the hood of this car is a regular 220 HP engine, but those nitrous bottles were just movie props. Even with mock nitro bottles, you shouldn’t be surprised with the price of it, because after all, this Supra is an iconic movie car.