20 of the Coolest and Most Memorable Movie Mustangs Everybody Knows

Cars and movies have gone hand in hand ever since the first motion picture graced the silver screen. Over the decades, movies featured numerous car chases and stunts, but one car stands out as probably the most popular movie machine: the Ford Mustang. Since the Mustang’s 1964 introduction, this model was featured not in hundreds, but in thousands of movies and TV series.

The Mustang has been in American-produced films as well as lots of foreign flicks, too. It is safe to say that the Mustang is the ultimate movie car since there is no movie made in the last half of the century without at least one pony car in the background. So, here are 20 of the coolest and most memorable movie Mustangs to ever grace the big screen. These are the legendary Mustangs that made movie history. 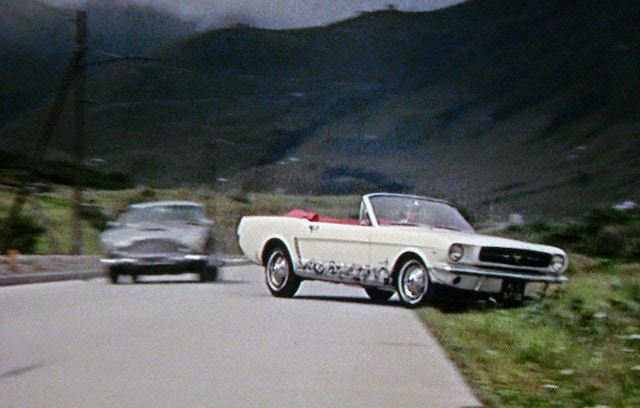 The legendary British secret agent James Bond encountered Ford Mustangs several times in his career. The first time Agent 007 saw the Ford Mustang was in the movie, Goldfinger when his Aston Martin DB5 raced a 1964 Mustang convertible in the Swiss mountains. The chase scene proved to be popular when the movie world witnessed the magic of the Mustang. 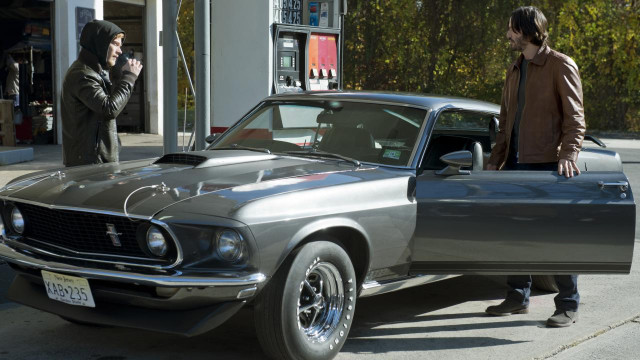 When the retired professional killer, John Wick refuses to sell his prized 1969 Mustang Sportsroof, all hell breaks loose. That is in short, the plot of this action blockbuster starring Keanu Reeves. However, we can all related to John Wick and understand that the guy just wanted to keep his beautiful Mustang. 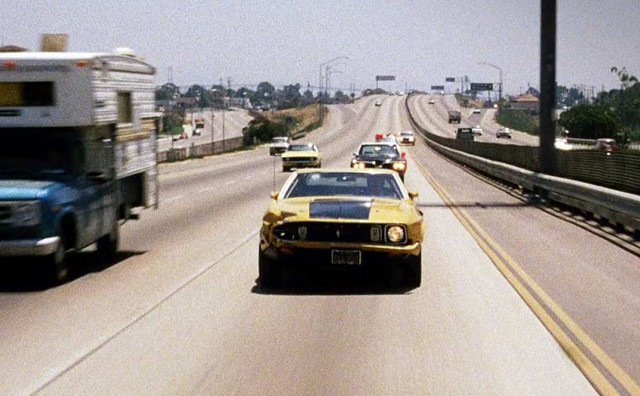 The original Gone in 60 Seconds came out in 1974. It is B production masterpiece full of cool cars with an epic, almost half-hour car chase at the end. The car in question is the cool 1974 Mustang Mach I. It gets almost totally destroyed, but before that, it earns its place in movie and Mustang history. 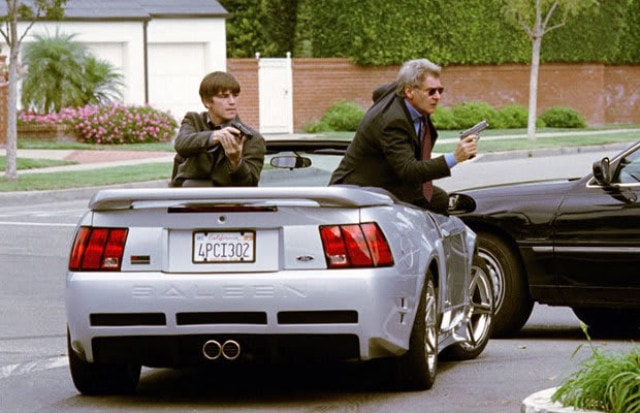 Harrison Ford is best known as Indiana Jones, but in this 2004 comedy, he played a police sergeant who uses some unusual methods in solving crimes. The silver Saleen S281 Supercharged helped with its power, speed and cool factor. 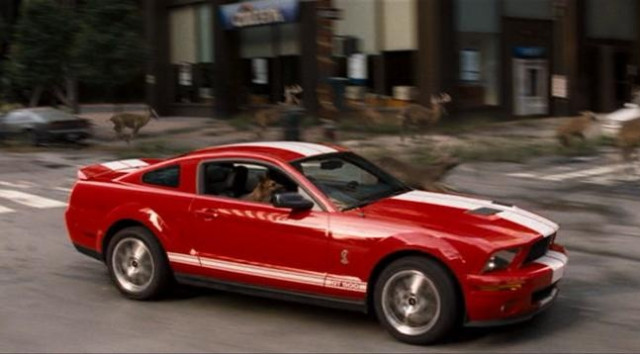 Will Smith discovers that he is alone in the world in this eerie sci-fi flick. The doomsday scenario is creepy enough, but the cool part is that he gets to drive a beautiful red Shelby GT500 as fast as he wants through the deserted boulevards of the big city. 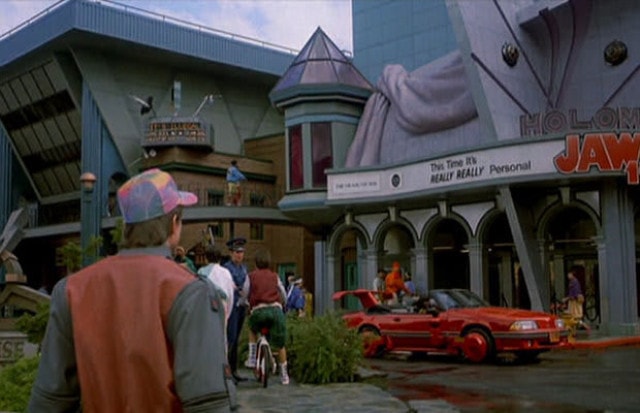 The interesting thing about the Mustangs featured in this movie is that they were artistic visions of future models, not regular production cars. Since Marty and Doc travel in time, they encounter future cars. In this case, it is a red Fox-body Mustang GT convertible with strange add-ons. 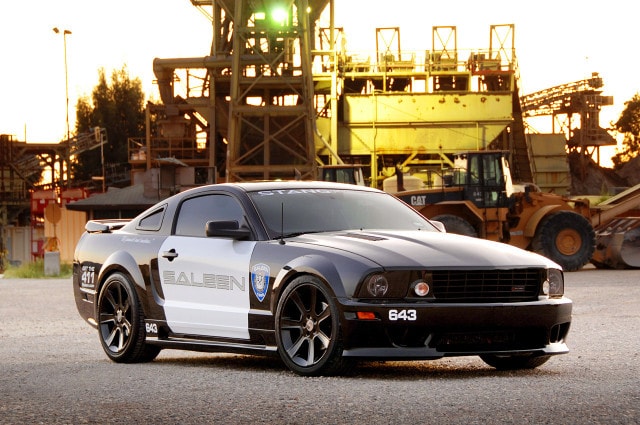 Even though the Transformers movies were all about Bumble Bee Camaros, the Mustang had a cool role in form of a police car named Barricade. The Saleen S281 Extreme in full police spec along with a machine gun looked extremely cool. 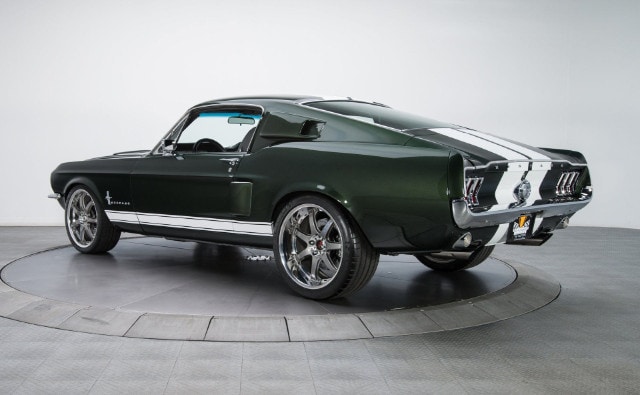 The third installment of this popular movie series was in Japan, so it was full of JDM cars. However, one ’67 Mustang Fastback makes an appearance, but in a slightly controversial form. The green fastback has a Nissan engine under the hood that many of Mustang fans will consider a blasphemy. However, even with the RB26DETT motor under the hood, the Mustang is still cool and performs driving scenes perfectly. 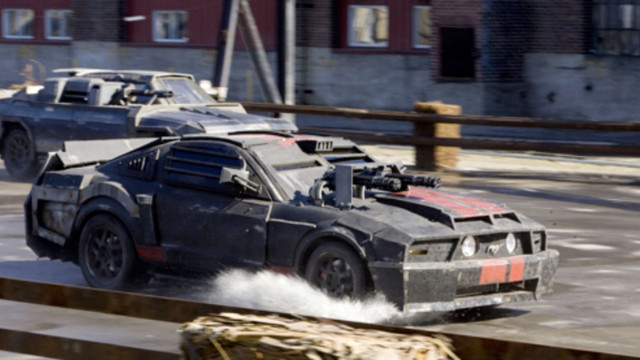 Everyone loves Mad Max style vehicles and apocalyptic designs, but a Mustang with machine guns, twisted panels ready for battle is next-level cool. This is exactly why the Death Race 2008 Mustang “Frankenstein” car is featured on this list. 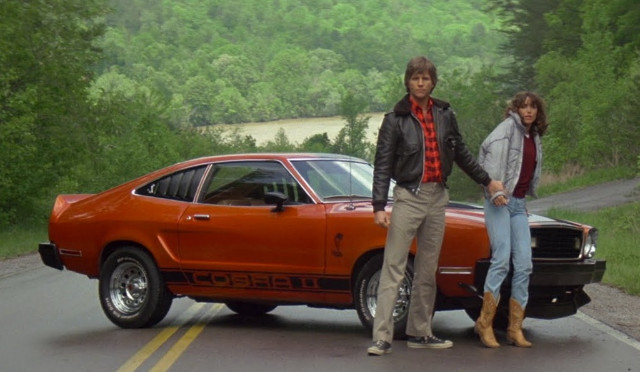 The Mustang II from 1974 to 1977 wasn’t the most favorite generation. Lots of people still consider them to be terrible compared to the previous or even the later models. That is why those cars are rarely featured on the silver screen. However, one of the few times the Mustang II was cool was when it was in the Starman movie with Jeff Bridges. He plays an alien who drives a copper-colored Mustang Cobra II. 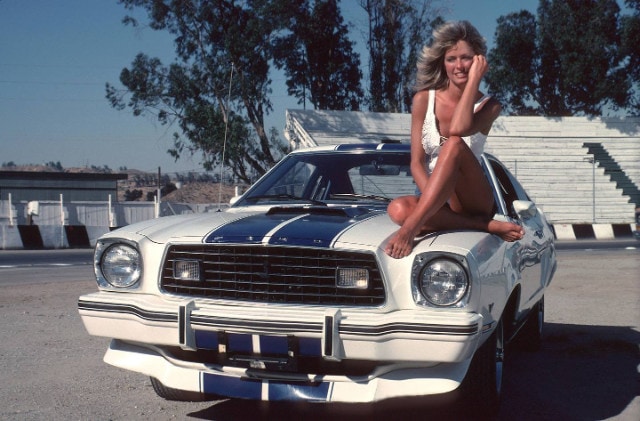 Another time when the Mustang II was cool was in the legendary Charlie’s Angels TV series. First, because it was a cool-looking Mustang Cobra II in white with racing stripes. Second, because it was driven by one of the hottest actresses of the era, the beautiful Farrah Fawcett. Most people know that Charlie’s Angels was a TV series and only become a movie in the 2000s, but we have to feature it on this list. 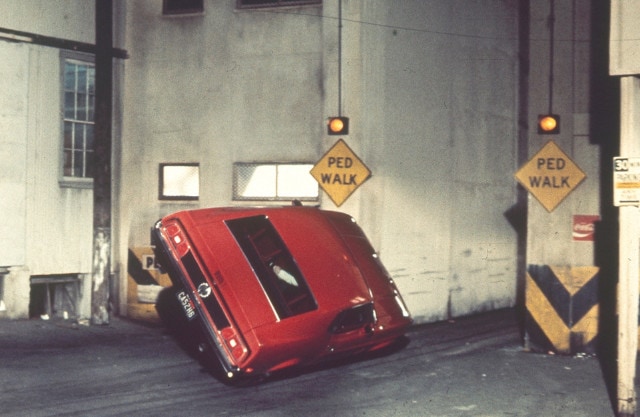 The second James Bond movie to feature Mustang was Diamonds are Forever from the early ’70s. The part of the movie is set in Las Vegas and what is better to drive than a red hot Mustang Mach I. In fact, this car entered movie history for its famously flawed stunt scene. It entered a narrow alley on two wheels, only to exit the same alley, tilted on the other side and driving on the other two wheels. 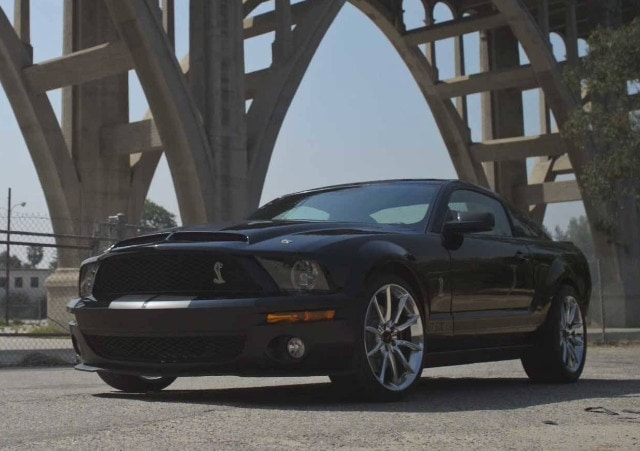 Although the Knight Rider is a well-known TV series from the ’80s featuring a Pontiac Trans Am as the K.I.T.T. car in 2008. They adapted it into a movie, which was received with mixed reactions. However, the Shelby GT 500 fitted with all the typical K.I.T.T. equipment, weapons, and chameleon paint was a cool and memorable car. 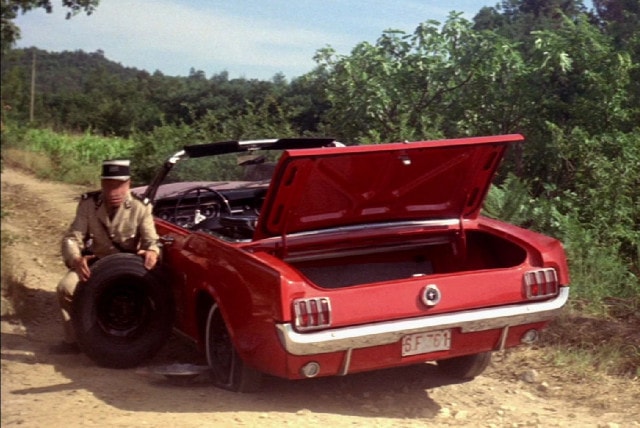 The legend says that the first movie to feature the then-new 1964 Mustang was not Goldfinger, but the French comedy, Le Gendarme de Saint-Tropez. Whatever the truth, this movie helped establish the popularity of the Mustang in Europe where it was as respected and sought-after as in the states. 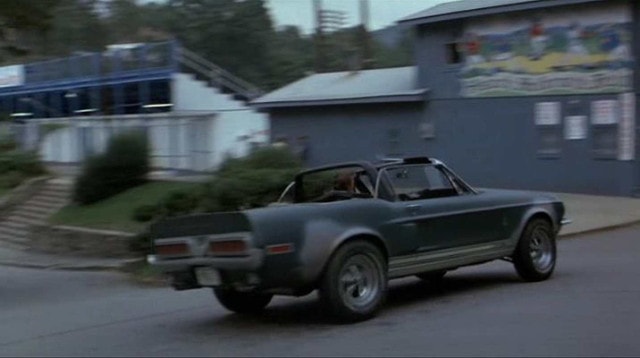 Although a kind of forgotten baseball movie from the ’80s, Bull Durham is still a cool flick with a good selection of actors. However, it is cool since it features a beat-up 1968 Shelby GT 350 Convertible Kevin Costner drives. This is one of the rare times when you see a prized classic like a Shelby in not so great condition and as a daily driver. 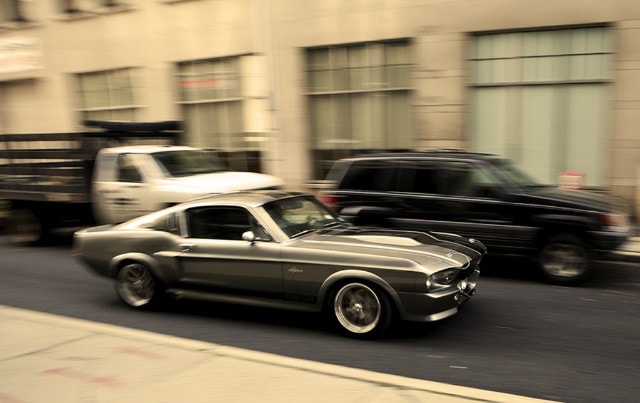 The 2000 remake of the B production classic proved to be a box-office success and a cool movie for car fans everywhere. Of course, as in the original film, the leading role is, in fact, a special Mustang. In this case, it is the Shelby GT 500 E. The car proved to be so popular, the built thousands of replicas. The original one they used for the movie recently sold for a cool million dollars. 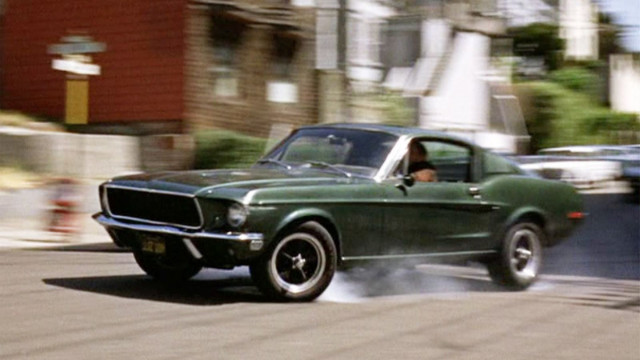 In 1968, the legendary actor Steve McQueen starred in the detective flick, Bullitt. He played a detective who drove a mean-looking ’68 GT390 Fastback. The movie was a standard crime drama typical for the period, but the car and car chase with a 1968 Dodge Charger was something else. In fact, it was so revolutionary, intense and dynamic that it became a legend of the movie world, launching the Highland Green Mustang into stardom. McQueen’s fastback is arguably the most legendary movie Mustang of all time. 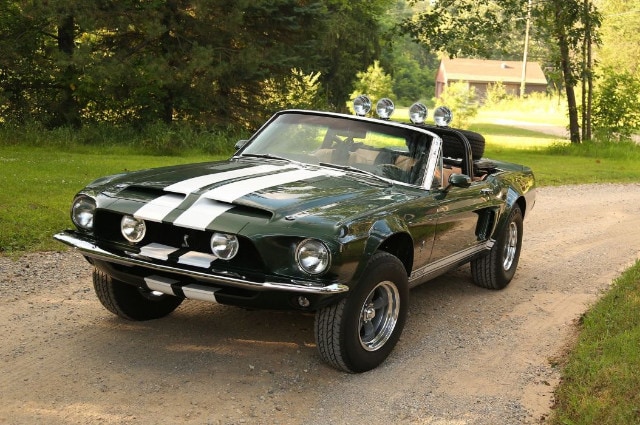 Although the original movie from the late ’60s featured beach buggies and a yellow Ferrari, the remake from the ’90s had an interesting 1968 Shelby GT 350. In contrast to similar cars, they converted this Shelby for off-road driving. It had special tires, wide fenders, a roll bar and a spare on the back. This Mustang even had lights on the top. It was a cool looking vehicle and one of the coolest Mustangs ever to be featured on film. 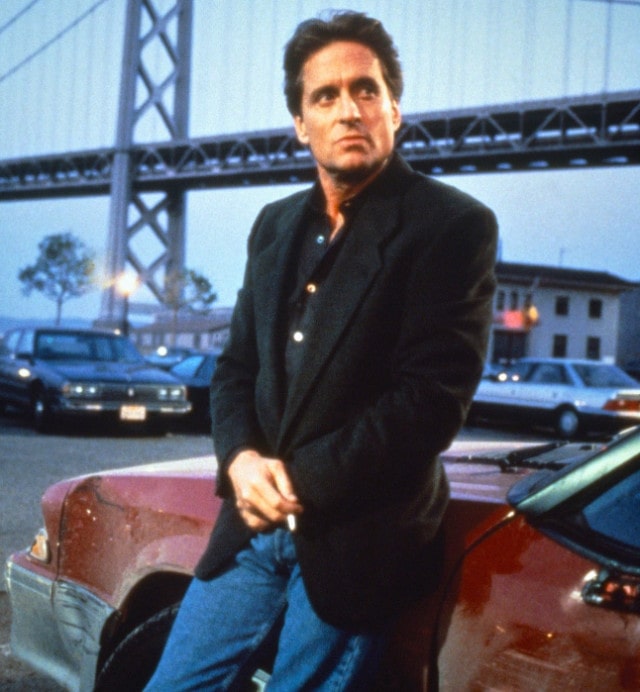 This 1992 psychological thriller is famous thanks to Sharon Stone’s performance and the car chase with the Lotus Espirit. However, it is also remembered for the appearance of a dark red Mustang convertible Michael Douglas drives. The car endures a lot of torture and perfectly fits the photography and feel of the movie. 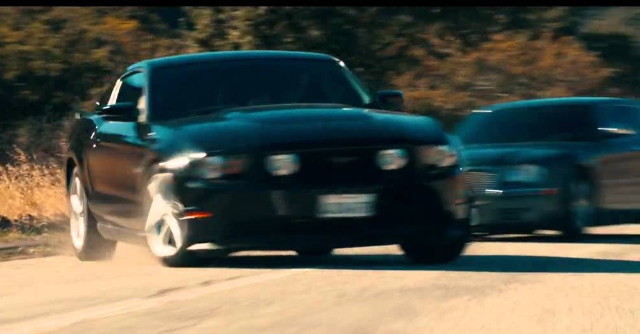 The proof that the Mustang is memorable even if it is not a flashy modified car is The Driver, a noir thriller featuring Ryan Gosling in the leading role. In this movie, Gosling is a driver for hire who drives a regular black 2011 GT model. However, the intense action, driving scenes and cool production make a hero car out of this ordinary-looking modern Mustang.

These are 20 of the coolest and most memorable movie Mustangs everybody knows and loves. Thanks to the Mustang, these movies will always be famous and watched often. Which one did you like the best?