25 Legendary Drag Racing Cars That Came Out Of Detroit

Those altered wheelbase Mopars shocked the drag racing scene in the mid-60s. It was not only due to their crazy looks but also with their sublime performance. It was the time of Dodge/Plymouth domination, and Ford wasn’t ready to surrender. That is why they needed a similar car to compete in the newly founded FX or factory experimental class.

The solution was the A/FX Mustang built by the Holman Moody company, a long-term Ford collaborator that specialized in special and racing vehicles. They only made 13 cars, some with an altered wheelbase and some looking more like stock. But they were far from it since under the hood was a fire-breathing 427 V8 with an estimated output well north of 600 HP.

Ford introduced the new for 1966 Fairlane, and the car was immediately a hit with customers all over America. However, to continue the tradition of the massively successful Thunderbolt, Ford produced 57 specially-designed R-Code Fairlane 427 Lightweights, selling them to drag racers nationwide.

The 427 was the final evolution of Ford’s venerable FE block. The real output was around 650 HP, but this version of the 427 Medium Riser had a 13.2:1 compression ratio. While that insured big power, it had questionable street manners. All the 427 Lightweights benefitted from a fiberglass hood with a functional hood scoop. They came with lightweight fenders and bumpers, as well as a stripped interior.

Thanks to all that power and low weight, the 427 Fairlane set a new B Class record with 11.2 seconds quarter-mile time. That proved Ford had created another drag strip monster after the legendary Thunderbolt.

After the crazy 1965 altered wheelbase cars, Chrysler returned to more stock-looking models for 1967, producing a limited run of RO/WO Plymouths and Dodges. Some say Chrysler built 100 cars to satisfy the NHRA rules for the Super Stock class, but that number seems high. While the number of 50 cars is more likely, some people claim they built as little as 32 cars. 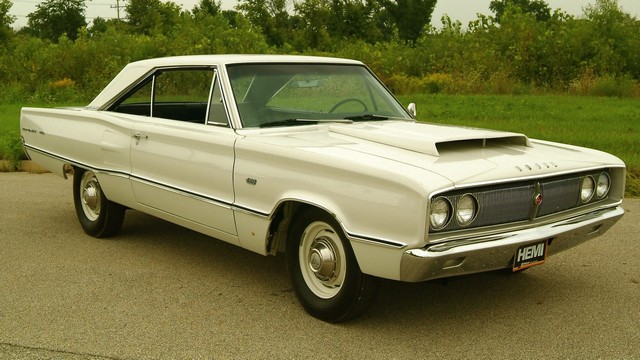 The RO/WO cars were mechanically identical to the Dodge or Plymouth body styles. The front end was lightweight with limited-slip differentials, heavy-duty suspensions, and stripped-down interiors. All the cars only came in white, so each racing team could add their decals and numbers.

The automatic cars came with a special TorqueFlite transmission that drivers shifted manually through its reverse shift pattern. In some cases, this proved to be faster than a regular four-speed manual. The heart of the car was, of course, the Race Hemi. With 426 cubic inches and over 600 HP in race trim, it was one of the craziest power plants on the scene.

Ford presented the legendary 428 Cobra Jet in 1968 and immediately put it in the Mustang. The Mustang 428 CJ was a mid-year introduction mostly for drag racing, and that’s why they sold it in modest numbers. But the real drag racing special was the 50 Wimbledon white Fastbacks with the 428 CJ engine. Ford added a lightweight, close-ratio four-speed transmission and heavy-duty suspension they designed and produced to satisfy NHRA rules.

Ford rated the new 428 Cobra Jet at 335 HP, but everybody knew the new big block produced far more than that. The real output of those race-prepared white Fastbacks was closer to the 500-HP mark. Even with less power than the Mopars, the Mustang won races since it was smaller, lighter, and better balanced.

As one of the most significant forces on America’s drag strips in the ’60s, Chrysler was always seeking ways to improve performance. Their goal was to introduce new concepts and break records. After years of fiddling with mid-size platforms, for 1968, the Mopar guys shoehorned the Race Hemi in the smallest platform they could find, which was the Dodge Dart.

The actual fabrication of this beast was a tough task. They assembled the Hemi Darts almost by hand using the regular 383 Dart as a base. Installing the big Hemi in the small Dart engine bay was challenging, but the Chrysler engineers managed to produce exactly 80 cars.

Of course, none of them were street legal, so they all went to racing teams. Chrysler painted them in primer, making them ready for race decals and stripes. The new Dodge Hemi Dart was a drag strip terror because it had the lightest body and the most powerful engine, helping Mopars own the 1968 NHRA season.

The 426 Hemi engine was not a regular production item in the Barracuda line until 1970. However, for the 1968 racing season, Plymouth produced 50 drag racing specials using Barracuda Fastback bodies and 426 race spec Hemi engines. They shared the actual manufacturing with the Dodge Hemi Dart in Chrysler’s Hamtramck, Michigan, plant.

As the Dodge Hemi Dart, the Barracuda came as a pure racing, non-street legal vehicle in primer ready to be personalized by each racing team.

The American Motors Company was a legendary economy car manufacturer that battled the Detroit’s Big Three for decades. However, they eventually folded in the mid-80s. AMC was famous for compact and affordable cars, interesting concepts, and dependable mechanics. However, in the late ’60s, AMC decided to enter the muscle car market hoping a muscle model would bring some excitement to the AMC lineup.

That was the right decision. Today, people remember this company mostly for its muscle cars, and not for its basic, low-optioned family sedans, which were the majority of the production. AMC presented two models, a four-seat coupe called the Javelin and a two-seat coupe they called the AMX. Besides the Corvette, it was the only American two-seater model at the moment.

They built the AMX on a shortened Javelin chassis featuring better equipment, more powerful engines, and lots of go-fast options. The Javelin and AMX enjoyed considerable success at the time. However, there was one exceptional, rare version and that is the AMX SS 390.

They built this car in cooperation with Hurst, a famous company from the era. It featured lots of modifications and the biggest AMC engine, the 390 V8 with 340 HP. This may not sound as powerful as other muscle cars of the period, but the AMX SS 390 was light, compact, and brutally fast. They only made 52, mostly in red, white, and blue. They went to drag strips where they beat those much more powerful cars with ease.

As you may know, back in the late ’60s, Chevrolet was under the racing ban proposed by General Motors. This meant that no official Chevrolet products could race. Chevrolet, as a manufacturer, couldn’t participate in any racing activities. Of course, nobody stopped Chevrolet from helping racing teams through its backdoor programs in which they developed several special engines and components.

In the late ’60s, Can-Am was a famous racing series, featuring prototype class cars with V8 engines. Chevrolet wanted to purpose-build a power plant for this championship, so they produced an all-aluminum 427 big block they called the ZL-1 in 1969.

It was a high revving, 7.0-liter V8 producing around 550 HP in mild tune. Chevrolet built approximately 200 of those engines. While most of them went to Can-Am racing teams, 69 ZL-1s went to the C.O.P.O Camaros and drag racing teams.

The Camaro ZL-1 was the same as a regular 1969 Camaro on the outside, but it was so fast, it was barely street legal. The 1969 official Chevrolet literature doesn’t mention the ZL-1 option for the Camaro. But, if you were a successful drag racer or dealer, you knew about this expensive option. That is why they only made 69 Camaro ZL-1s.

The biggest news for 1969 was the introduction of the Barracuda 440 V8, a monster pony car with the biggest engine under the hood of a car in that segment. Plymouth wanted to be a dominant force in the stock class of the drag racing championships. So, they needed a proper weapon equipped with a big block and tons of torque.

The Barracuda 440 was exactly what they needed even if it was a handful to drive. Also, it required a complicated production process since the big 440 wouldn’t fit in the small Barracuda engine bay without extensive modifications.

The Barracuda 440 produced 375 HP and a massive 480 lb-ft of torque, which made it fast but also hard to launch due to loads of wheel spin. Because of the tight fit of the engine, there wasn’t enough space for a power steering pump. That meant you had to use your muscles to turn this compact but overly powerful car. Plymouth only made a handful of these models, which makes them highly sought after today.

The ’80s are generally considered the dark ages of muscle cars and American performance, but there were a few bright moments. One of the vehicles that restored the faith in the muscle car movement in the ’80s was the mighty Buick GNX. The story of this model is an interesting one. As far back as 1982, Buick started experimenting with turbocharging its line of standard V6 engines.

But in 1987 came the ultimate version they named the GNX, for Grand National Experimental. It featured the same 3.8-liter turbocharged V6, but with 275 HP and a 0 to 60 mph time of 4.7 seconds. At the moment, the Buick GNX was the fastest accelerating production model in the world. At $29,000, it wasn’t a bargain. However, there is a widespread legend about the owners who paid the lease on these cars just by street racing them for money.

Since 1968 and the introduction of the famous 428 Cobra Jet engine, Mustangs with this name were iconic drag strip terrors and true street fighting machines. However, in the last couple of years, Ford has decided to introduce specially-prepared Mustangs. They are not exactly street-legal, so they sell them exclusively to drag racing teams and privateers.

Named the Mustang Cobra Jet, the 2018 version comes with a 5.2-liter Coyote V8 with a 3.0-liter massive supercharger on top, pushing close to 1,000 HP. The drag slicks, special rear axle, and numerous other details are all a part of the deal. Ford produced just 68 cars at $130,000 each.

Even though Chevrolet only produced 69 original COPO Camaros, the legacy of those rare drag racers is immense. Fast forward 50 years and Chevy has presented a mighty new Camaro. The Chevrolet racing department managed to introduce a modern COPO Camaro drag racer following the same 50-year-old concept.

The car is ready for drag racing right from the box and comes with several engine options. You can get it with a naturally-aspirated 427 V8 or with the smaller V8 engine that packs big superchargers. Unfortunately, Chevy has limited production to just 69 of them.

If 707 HP from the Hellcat package isn’t enough and you want the ultimate modern muscle car with the most powerful street Hemi engine ever, the Demon package is for you. With standard fuel, it delivers an insane 808 HP, but if you use the high octane stuff, it will pump out almost 840 HP.

The rest of the Demon package is equally insane, from its special transmission, suspension, and brake to the widebody stance and exterior details. The acceleration from 0 to 60 is less than three seconds, but under full power, the Demon will accelerate with 1.8 G force. Amazingly, that is faster than being dropped off a cliff. The car is capable of covering a quarter-mile sprint in less than 10 seconds straight from the box.