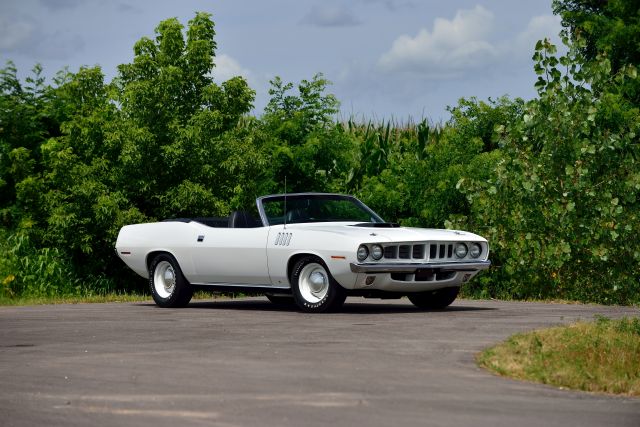 One of the rarest and most desirable muscle cars is the Plymouth Hemi Barracuda. This model combines several desirable options for any muscle car lover. First, the Barracuda is a Plymouth, a brand that no longer exists. They were known for several highly respected muscle cars like the Roadrunner, GTX and Barracuda.

Second, the 71 Barracuda, or Cuda, is the second and last generation of this model, which they totally redesigned for 1970. It featured a new body and interior, as well as a lineup of powerful engines. Third, the Hemi option was extremely rare and meant this Cuda produced a 425-underrated horsepower to deliver brutal performance.

Third, the convertible body style was also rare. To be precise, they only produced seven Hemi Cuda convertibles for 1971. The reason the Cuda was such a rare car was simple. Back in the day, a convertible with the most powerful engine wasn’t as desirable as it is today. The Hemi engine was the favorite of the street racing crowd, but those guys wanted performance. So, they installed this engine into the lightest body, which was a coupe.

They built the Cuda convertible for cruising, so it didn’t need a 425-thumping horsepower under the right foot. That is why Plymouth only offered seven of them. However, since they are so rare, the Hemi Cuda drop top is also one of the most expensive muscle cars in existence. A mint 1971 example sold for $4.1 million back in 2008. After 1971, Plymouth continued to offer the Cuda until 1974, but they discontinued the Hemi engine option and convertible body style.