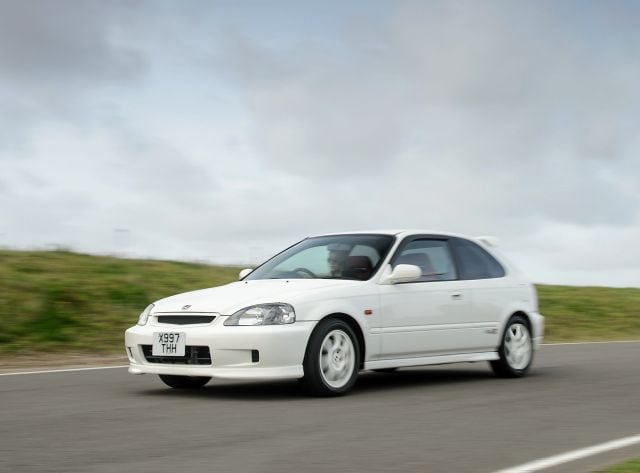 Japanese manufacturers were always active in the hot hatch class. However, only a few of their models received cult status and a place in hot hatch hall of fame. One of those cars is the first Civic Type R they introduced in 1997. This car was especially well received in America. Its performance, driving dynamics, road holding and light weights were famous with budget-minded enthusiasts who wanted performance.

The heart of the EK9 generation Civic Type R was a 1.6-liter naturally aspirated four-cylinder with the famous V-Tec system, which delivered 185 HP. This high-power output was legendary. Even though there wasn’t much space for engine tuning, you could take the rear seat out and make your Civic lighter and faster. The car stayed in production until 2000 and still is a popular model amongst the hot hatch fans in America. 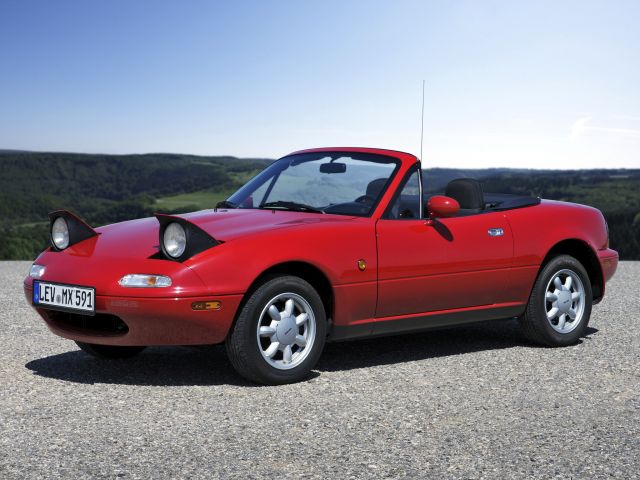 This is a little roadster with a diminutive four-cylinder engine. However, perfect balance, rear-wheel drive, rev-happy engines and precise handling make the Miata a joy to drive. Mazda sold over a million examples since it entered the market in 1990. You can find them affordably almost anywhere.

Since the power output of any Miata is relatively small, you can engage in some spirited driving down twisty roads while still being under the speed limit and out of trouble.

For those who want something more out of this little convertible, the number of aftermarket companies that offer various bolt-on kits and components is enormous. So, you can easily and inexpensively personalize your Miata to make it go faster and handle better. 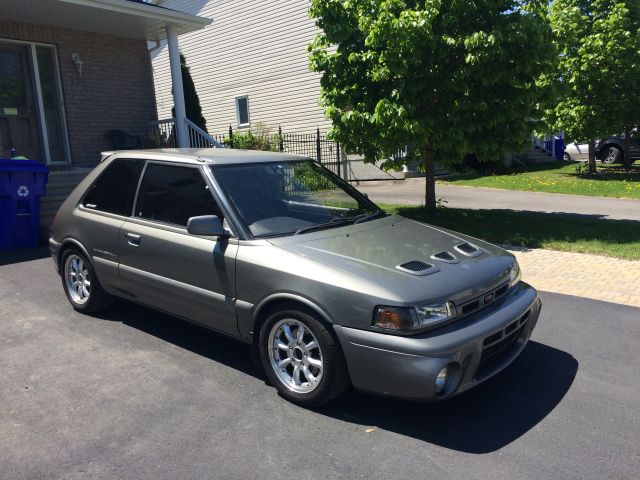 The early ’90s were a perfect time for the introduction of rally homologation specials and many European and Japanese companies did just that. Almost all those models became successful on the rally stages and legends of hot hatch segment.

However, some of them remained popular all those years and some fell into oblivion. This car is one of the latter. Called Mazda Familia GTR for Asian markets and 323 GTR for the European market, it was a very competent and fast version of the popular Mazda compact car. But GTR meant more than just a cool nameplate. That meant highly tuned version of a 1.8-liter turbocharged four-cylinder and special all-wheel drive.

The power output was pretty high at 205 hp, and AWD system meant that this little compact handled like a dream. Today, they are pretty rare and not so expensive so hurry up and snap this obscure piece of rally history. 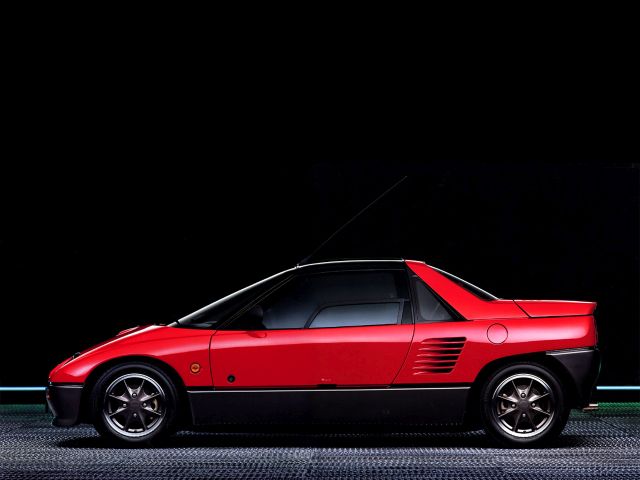 If you don’t know what this is, nobody can blame you. It is a tiny sports car powered by a turbocharged three-cylinder engine with 660 cc and 64 HP. It was built by Mazda and sold by Suzuki in limited numbers from 1992 to 1995. During that time, they made less than 5,000.

Despite its size and 1,500 pounds of weight, the Autozam AZ-1 was a proper sports car. Some even consider it the only supercar in Kei Car segment. With a perfect chassis, gullwing doors and decent performance, it was a favorite driving machine in Japan at the moment. The bizarre styling but lively driving dynamics give the driver a unique driving experience.

This is one of the reasons you should consider importing this little gem since they never officially sold it outside of Japan. You can now import it to America since it is older than 25 years. 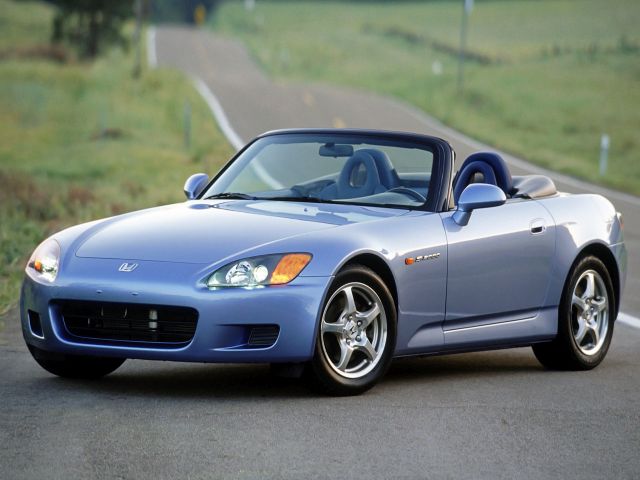 Honda introduced the S2000 in 1999 and discontinued it in 2009. The S2000 is a 90’s model, even though they presented it at the end of the decade. This model was a true driver’s car with all the important features. It had a lightweight construction, ideal weight distribution and a powerful, rev-happy engine. It also provided razor-sharp handling in an elegant open-top package.

Under the hood was a 2.0 or 2.2-liter four-cylinder engine with 240 HP, which was the main selling point of the car. This little gem of an engine featured a 9,000-rpm redline and four valves per cylinder. It had the famous Honda’s V-Tec system, which provided power at high RPMs and a wonderful screaming sound. Thanks to intelligent engineering and light weights, the S2000 had a respectable performance and perfect handling, earning it universal praise.

During its 10-year production run, Honda sold over 110,000 of these fast, little roadsters. You will be pleased to know you can find one today at around $6,000. However, there is one thing you should know. The S2000 is a small car with limited interior space, so if you are over six feet tall, you will probably have problems fitting inside. 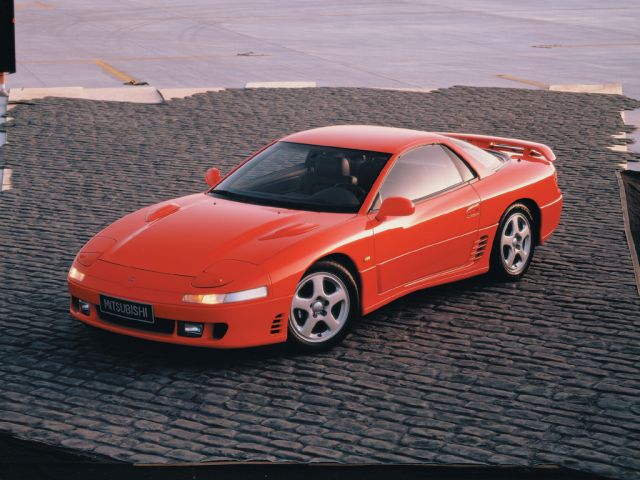 The 3000 GT is another 90’s legend that mainstream sports car enthusiasts have forgotten, which is a shame. With pop-up headlights, rear panorama glass, and big spoiler, the 3000 GT screams early 90’s car design. But there is much more about this car than contemporary nostalgia since this is one serious driving machine. Under the hood is a 3.0-liter twin-turbo V6 with 300 HP, which sends power to all four wheels over an intelligent AWD system.

This layout makes the 3000 GT a capable coupe that can tackle any road conditions and provide extra grip in extreme situations. The only downside is the weight. Since they packed the 3000 GT with technology, it tips the scale at almost 1,8 tons or 3,800 pounds. However, with an acceleration time of just over five seconds, it seems like the 3000 GT carries it with ease. 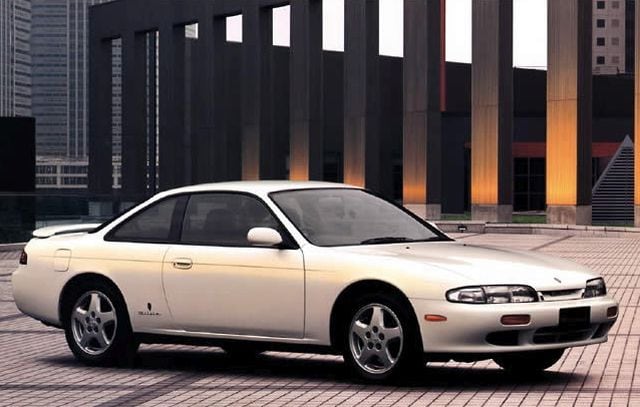 Known as a Silvia or 240 SX on other markets, this was Nissan’s most affordable sports car in the mid-90’s. Nissan introduced it in 1993, and the car world instantly praised it for its handling, rear-wheel drive and sharp steering. This was a light car with good weight distribution and decent power from four-cylinder engines.

In stock form, S14 had from 150 to 220 HP if you chose the optional turbo engine, which were decent numbers for the period. Like all Japanese sports cars from the era, the Silvia had fantastic tuning potential, as well as dependable mechanics. This meant enthusiastic owners could easily up their power levels to over 300 HP or more and transform the Silvia into a supercar.

Since it was so light and well-balanced straight from the factory, the Silvia soon became a favorite car for drift races. It is still one of the favorite choices, even 20 years after they produced it. This is a fantastic achievement for any car. 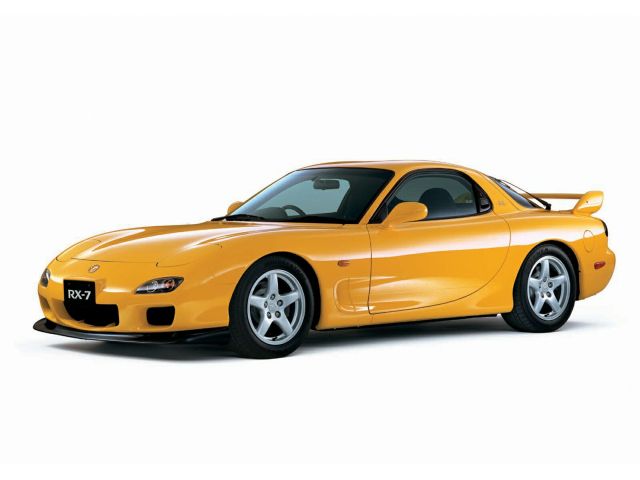 Mazda introduced the first RX-7 model in the late 70’s, but the car on this list is the third generation. They presented it in 1992 and discontinued it in 2002. If you know a thing or two about Japanese sports cars, you know that the RX-7 has a special place in the nomenclature of performance cars from the “Land of the Rising Sun.”

The reason is the engine. In contrast to other cars on the market with conventional piston engines, the RX-7 had a rotary Wankel engine since the beginning. The rotary engine has many advantages over regular engines. Wankels are much smaller, simpler, capable of higher rpm and when equipped with a turbocharger, extremely powerful. The third generation RX-7 had several versions on offer.

It produces from 252 to 276 HP and has a vivid performance thanks to its small weight and perfect balance. Of course, tuners have developed numerous add-ons and aftermarket parts for more power and torque. But, this interesting feature can be the biggest problem of the RX-7 since Wankel engines are not regular engines. Sourcing parts and services could be a problem.

On the other hand, Wankel engines were always unreliable, so maintenance is a problem. However, great looks, fantastic performance, and innovative technology make the third generation RX-7 one of the greatest Japanese sports cars of the 90’s. You should grab this true modern classic before the prices start rising fast.

If one of these classic Japanese 90’s cars has caught your eye, be sure to move fast before they are gone or priced too high out of your range. Be sure to check their service and accident history, too.

Celebrities Who Will Shock You With Their Amazing Car Collections
POPULARCameron EittreimSeptember 27, 2022 Jay Leno Leno has one of the most extensive car collections in the automotive industry....

Sad Photos Of Real Cars That Were Ruined By Irresponsible Owners
POPULARCameron EittreimMay 27, 2022 38: Free Oil Change When you drop a car off at a mechanic shop, you...
- Advertisement -
Advertisement
Advertisement
Please wait 5 sec.