Home Cars Fast and Forgotten Supercars of the ’90s
Cars

Fast and Forgotten Supercars of the ’90s

Although modern supercars have achieved unimaginable levels of power and performance, the best decade for this car class was the ’90s. Those ’90s supercars had an irresistible charm and brute power, earning them a spot in the collective consciousness. And they didn’t even need those contemporary hybrid powertrains, computer-controlled double-clutch transmissions or active aerodynamics, either.

However, not all supercars have gained worldwide popularity and become household names like the McLaren F1, for example. Many of them have remained obscure, failing to attract global attention. So, here is an introduction to the interesting world of those forgotten, yet fast and fantastic supercars of the ’90s. 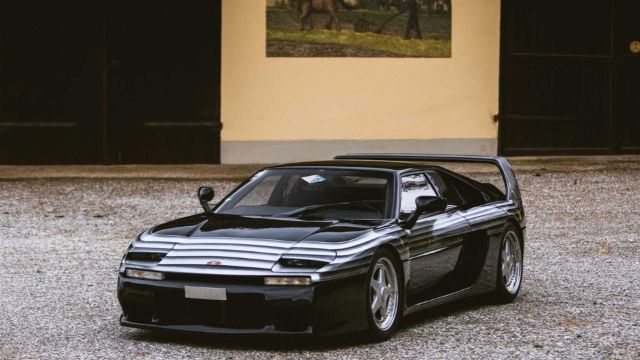 You are excused if you don’t know about Venturi, a small French car company that was active in the ’90s. Using components from other car companies and producing its own bodies and chassis, Venturi produced several beautiful and fast cars. They raced a lot and left a mark in the history of obscure supercars with the magnificent 400 GT model from the mid-90s.

Visually similar to the Ferrari F40, the Venturi 400 GT also used a twin-turbocharged engine. But in the Venturi GT’s case, it was a 3.0-liter Peugeot V6 that pumped out an unbelievable 400 HP, and that was in street trim. In racing trim, it was capable of over 600 HP. With all that firepower, the 400 GT could accelerate from 0 to 60 mph in just 4.6 seconds.

In fact, it could go over 180 mph, which was faster than the Porsches and Ferraris of the day. Unfortunately, cruel financial reality caught up with Venturi’s big ambitions, so they closed the company, first in 1997 and then again in 2000. Venturi withdrew from racing before that and managed to produce less than 100 fantastic 400 GTs. But since then, it has been lost in the corridors of time. 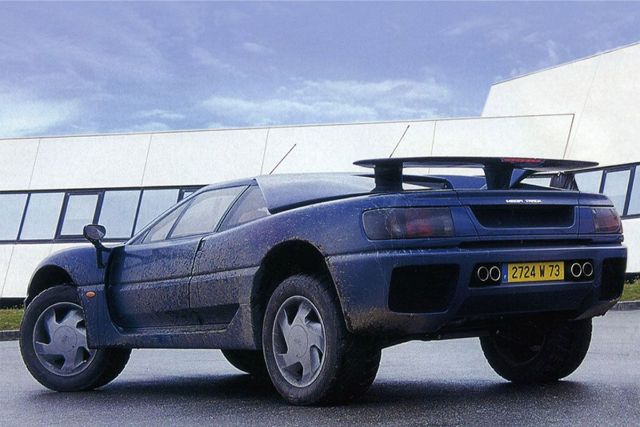 In the mid-90s, the Mega Track was the first and only off-road supercar AXIAM, the French company, ever built. You might wonder how it was possible to build a supercar capable of going off-road, but AXIAM managed to produce such a vehicle. They equipped it with an adjustable suspension that owners could transform from a regular sports car into an SUV in a matter of seconds.

The complicated system allowed 8 to 13 inches of ride height and in just one moment, the Mega Track could become a true off-road beast. Behind the driver was a massive 6.0-liter V12 engine from Mercedes-Benz that produced 400 HP and powered all four wheels. However, the concept had its drawbacks since the Mega Track was a heavy and big car. It weighed over two tons and had a length of over five meters, which is more than the Mercedes S-Class. 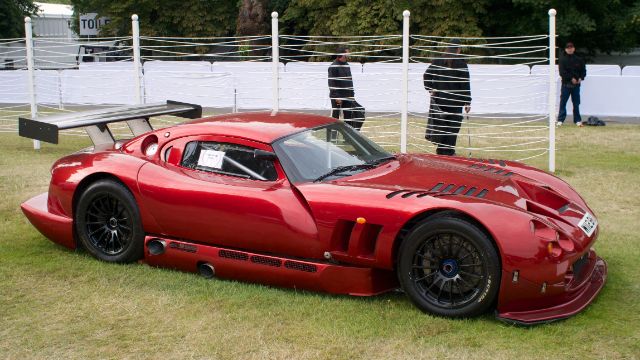 TVR, the British sports car company was famous for producing a series of capable coupes and power roadsters, but never a proper supercar. So, in the late ’90s, company management decided to present the ultimate version of their popular Cerebra coupe they named the Speed 12.

The Speed 12 was a brutal, extremely powerful supercar and practically a race car for the street. It had a 7.7-liter V12 engine producing around 1,000 HP, but they never published the exact number. TVR designed the car primarily for racing, but due to the change of rules, it’s racing career was short and unsuccessful. 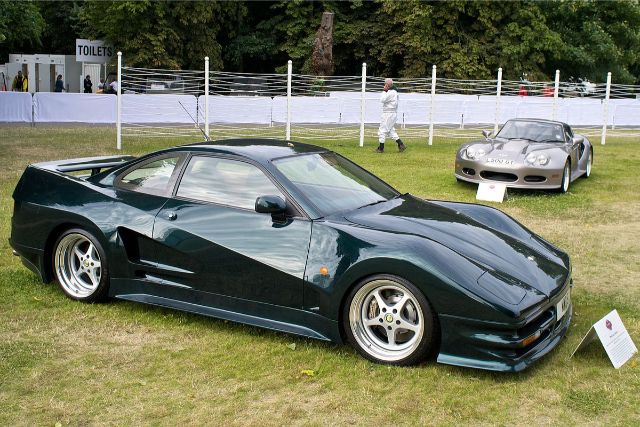 The Lister company was best known as a racing outfit and for preparing racing cars for a number of mainstream manufacturers like Jaguar, Maserati and Chevrolet. But in the mid-90s, Lister decided to make their own supercar using a highly tuned Jaguar V12 engine. They called the new model the Storm and it featured a V12 engine producing 550 HP. The engine displaced 7.0-liters they derived it from a Le Mans racer.

Lister made their own body featuring a wider track to accommodate wide tires as well as lots of scoops and spoilers for better cooling and aerodynamics. At the same time, Lister offered the Storm as a passenger car at almost $450,000 and a racing version for private teams. However, despite the brutal power, 4.0 seconds to 60 mph and over 210 mph, only four customers ever ordered it. 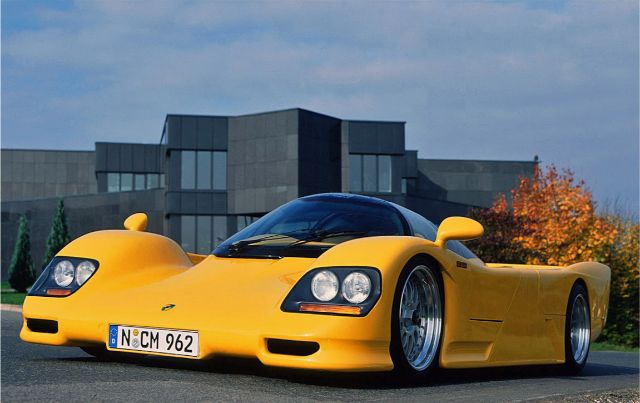 If you ever thought about what it would be like to drive a Le Mans racing car on the street, here is your answer in the form of the crazy Dauer 962 Le Mans. This car is possibly the most ultimate supercar they ever built since it is so extreme. And it is so fast, it could put most of the latest, fastest supercars to shame even though it’s over 20 years old.

The German company Dauer built this supercar between 1993 and1997. And basically, it’s a race car with some trunk space and license plates. The Dauer 962 gets 750 HP from its 3.0-liter turbocharged flat six engine.

The performance figures are also crazy. The 0 to 60 mph time is just 2.8-seconds and the top speed is 251 mph. But the problem with this model is that it is too much of a speed machine for most owners. 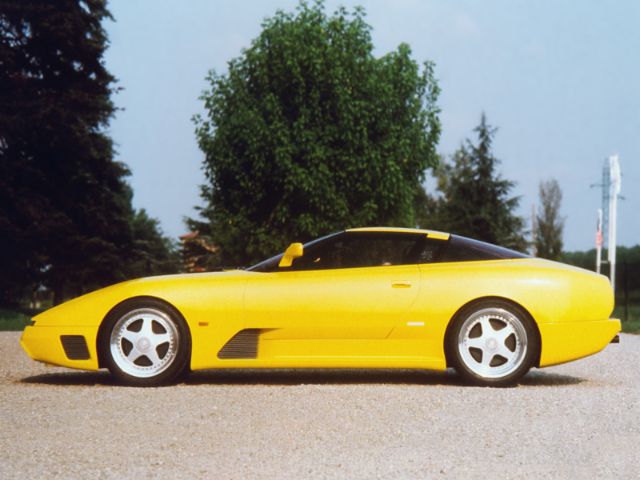 The legendary Iso Grifo from the ’60s and early ’70s left an everlasting mark on the industry. So in 1990, Pietro Rivolta, the son of the founder, presented the Grifo 90 concept. They built it on a Corvette C4 chassis with a special new body Marcello Gandini, the renowned stylist designed. Unfortunately, serious financial problems forced the cancelation of the project.

Soon, the Grifo 90 was forgotten. And that is a big shame since the Grifo 90 used the Corvette C4 ZR1 running gear and chassis. This meant it had 405 under the hood and brutal performance numbers. The Iso Grifo body was even a bit lighter than the Corvette, which improved its top speed. 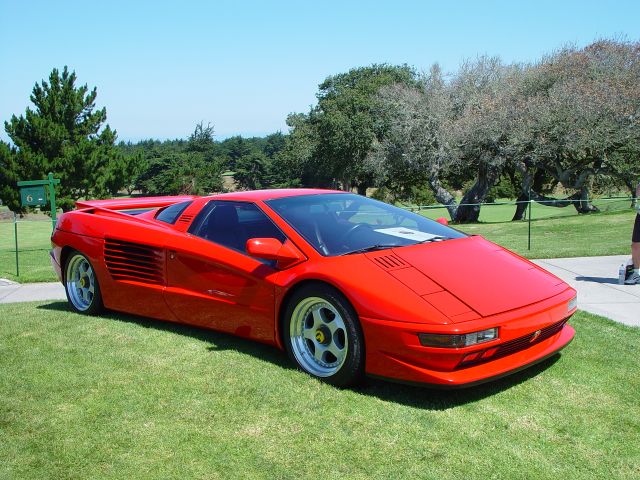 When they first offered it in 1988, the Cizeta-Moroder V16T had the potential to become the next big thing in the world of supercars. This car had it all including a celebrity endorsement, an Italian background, famous constructors, an exotic name and the top technology.

But the main feature of this obscure beast was a monstrous V16 engine they made out of two flat-plane crank V8 units mounted transversely behind the cabin. The V16 engine had six liters of displacement and delivered 560 HP, which was a fantastic number for the late ’80s. The performance was equally impressive.

The V16T could accelerate from 0 to 60 mph in just four seconds with a top speed of over 200 mph. Even today, those numbers would draw attention from the supercar crowd. The base list price was sky-high at close to $300,000. Sadly, they ceased production after only 20 examples, which is why they are a rare sight today. 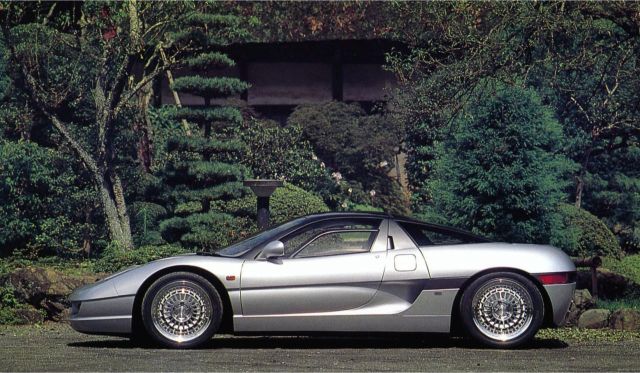 When they presented it in 1997, the Aerosa was an interesting supercar from a joint venture between the Gigliato Design Company and Lamborghini. Lamborghini did the engineering work and fabrication of the prototype and Gigliato did the design and aesthetics, obviously.

They sourced the power from Ford in the form of the 4.6-liter Mustang V8 producing around 300 HP. Even though the proposed price wasn’t so high, and the car had respectable figures, the project never advanced beyond the prototype/one-off phase. 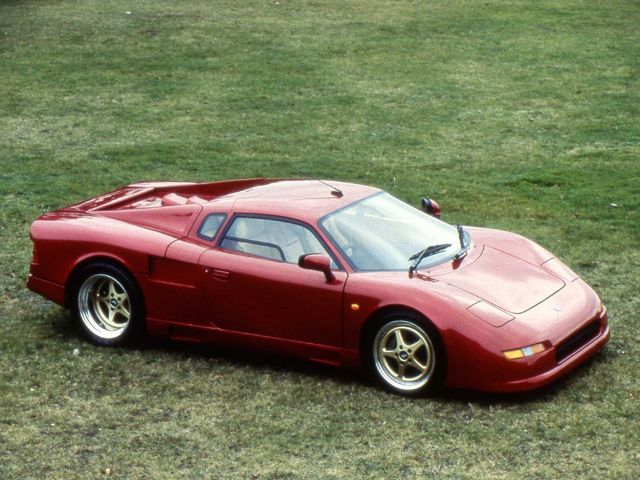 In the early ’90s, the British company, GT Developments decided to move from their Ford GT 40 replica business and enter the supercars game with the R42. The based the design of the R42 on a GT 40 space frame chassis using a modern Ford V8 engine. The design was elegant, and the interior featured more appointments than the regular GT 40 replica model.

They presented the car in 1993 but the market never showed much interest due to its obscure background. Another factor was that the supercar market in the early â€˜90s was suffering from the recession. 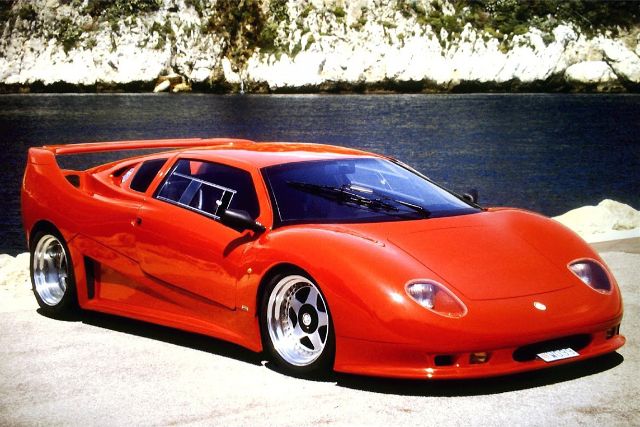 The Automobile Club of Monaco is a powerful institution in the car world. So, to celebrate its 100th anniversary, the club decided to construct and build a supercar. They named it the Centenaire, introducing it in 1990.

They produced the Centenaire until 1992 during which time they only produced five units. The power came from a Lamborghini V12 engine. However, the later versions had the Mercedes 6.0-liter V12 tuned by AMG. 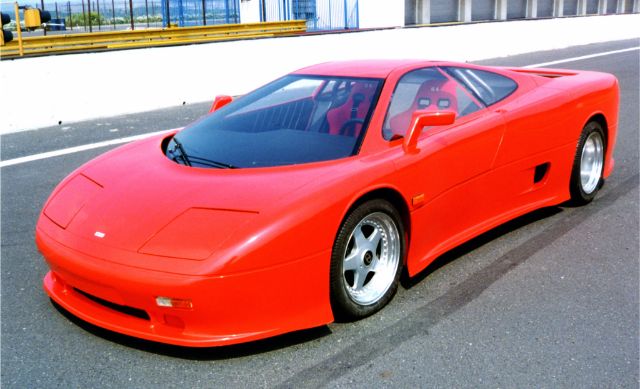 You probably remember the defunct Czech car company, Tatra, which produced luxury sedans behind the Iron Curtain. But in 1991, a group of young, talented engineers decided to make a supercar using race technology and a Tatra V8 engine. And the result was the Tatra MTX V8.

Introduced on the Prague Motor Show, the MTX V8 received many orders, but the product proved to be difficult. So eventually, they canceled the project. They only completed four cars, so it’s a real shame that the MTX V8 never got the chance to race against Ferrari, Porsche or Maserati. 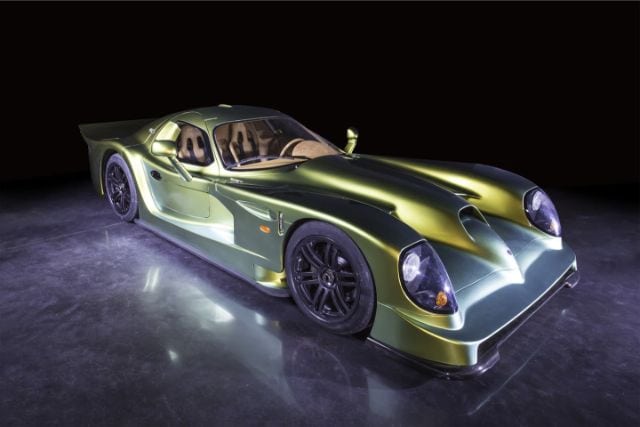 If you are a ’90s kid, you probably remember the Panoz Esperante GTR-1 from those popular cult racing games like Gran Turismo or Midtown Madness. This American supercar was the talk of the racing community in the late ’90s. However, despite the promising start, Panoz built only a few racing versions and one street-legal example.

The technology behind the Esperante was clearly for racing purposes. It had a space frame body structure, lightweight panels and two seats. Also, it had an engine they mounted towards the middle of the car for the best weight distribution.

The characteristic front of the car was aerodynamically efficient, although it wasn’t that attractive. Even better, under the hood, you could find a Roush-built, Ford-derived V8 delivering over 500 HP they mated to a sequential gearbox. 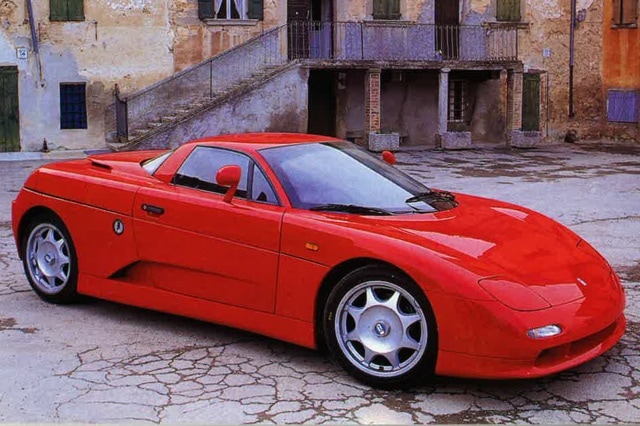 In a brave attempt to get back to the supercar arena, the DeTomaso Company introduced the Guara in 1993 as a fully production-ready model. They offered the car as a coupe and a roadster, both with a rear-mounted BMW or Ford V8 engine and Formula One-inspired suspension.

They made the body out of Kevlar and also, the Guara pioneered several innovative construction techniques. But despite the good initial reviews, the Guara had a hard time finding customers. So all in all, they only built 50 cars. 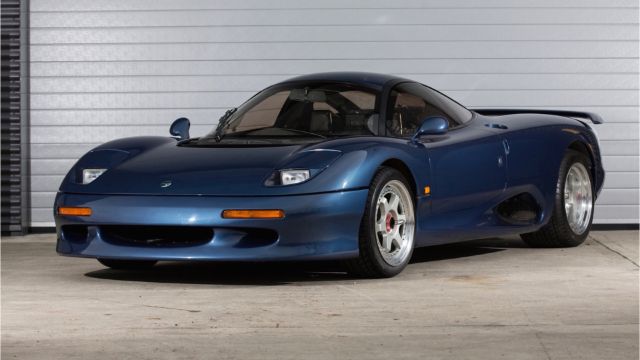 Even though most people know about the XJ220, Jaguar had another supercar in the â€˜90s. And that was the race-bred XJR-15 which they developed and produced in cooperation with the TWR racing team.

Based on a Le Mans winning racing model called the XJR-9, the XJR-15 was more user-friendly. It was a road-going car with a full Kevlar body and chassis, a six-liter V12 engine and numerous other “go-fast” parts. Because Jaguar produced it in limited numbers, in the two years of production, they only made 53 of them. 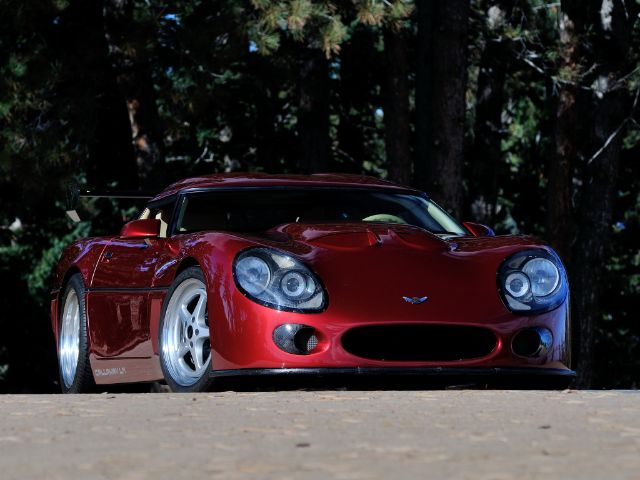 The Callaway Company had much success in the â€˜80s with their version of the Corvette C4. They gave it a heavily turbocharged engine to deliver ridiculous performance numbers. However, Reeves Callaway wanted to go racing, so in the early ’90s, they unveiled the Super Speedster LM.

It was the ultimate version of a race-prepared Corvette C4 with a turbocharged LT5 V8 engine with 766 HP on tap. However, this was much more than just a highly-tuned Corvette. Best of all, the Super Speedster LM had numerous body modifications, a totally revised suspension, race brakes and much more.

These are the fast and fantastic but forgotten supercars of the ’90s. Most are obscure and rare machines you probably will never see on the street. However, if you’re lucky, you may see one of these beauties in a museum or at a car show. Limited in their numbers, these cars have quickly been forgotten.

Celebrities Who Will Shock You With Their Amazing Car Collections
POPULARCameron EittreimSeptember 27, 2022 Shaquille O’Neal Shaq is one of the most famous basketball players in the world and...

Sad Photos Of Real Cars That Were Ruined By Irresponsible Owners
POPULARCameron EittreimMay 27, 2022 36: Frog In The Headlight There is nothing worse than finding a random animal under...
- Advertisement -
Advertisement
Advertisement
Please wait 5 sec.