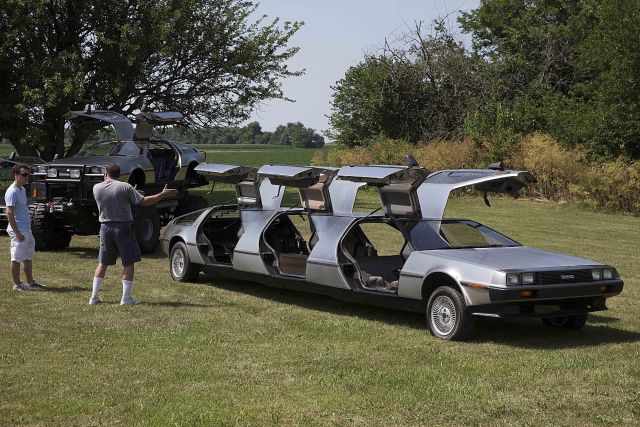 With its brushed stainless steel body, gullwing doors and most importantly, a starring role in Back to the Future trilogy, the DeLorean DMC-12 is one of the coolest classic cars on the planet. Even though it isn’t mind-blowingly fast or powered by a big, thirsty American V8, people all over the world adore the DMC-12. One way to make a DeLorean even better is to make a replica of the Back to the Future Time machine, but a group of enthusiasts had something else in mind.

Rich Wiessensel, a DeLorean enthusiast who already has a collection of crazy and cool modified DMC-12s, commissioned the car. Besides the stock version and the limo, there is a DeLorean monster truck, a convertible, and even a hovercraft. Wiessensel’s limo has three pairs of gullwing doors, and it’s a sight when you see all of them wide open. When the doors are open, the limo resembles a private jet rather than a car. Like the original DMC-12, this limo is also powered by a V6 engine, and with all that added weight, it can’t hit the magical number of 88 MPH.

But, this limo can do something else, and that is to look incredibly attractive while cruising down the city streets or while it’s on display on numerous classic car shows with its owner, Mr. Wiessensel, who has good taste in cars.