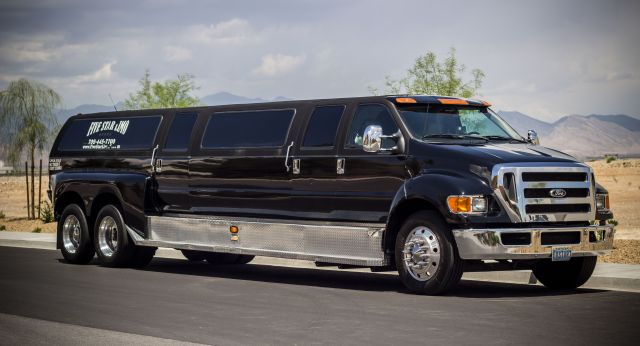 In production since 2000, the Ford F-650 and F-750 trucks are the final steps in the F Series evolution. These gigantic trucks are usually used for quite utilitarian tasks, such as flatbed towing, construction, hauling heavy loads or loaded with all sorts of machinery behind its cabin. But, the F-650 was also offered in civilian form with a long list of options and amenities. That’s where many conversion companies saw great potential for turning this working man’s truck into an ultimate party stretch limo.

The results are as crazy as they seem because they took the already huge F-650 truck and stretched it to the point it looked like a compact passenger bus. But, unlike the plain interior of a bus, these stretch limos have everything you can imagine. They have TV screens, high-quality audio systems, and comfy seating. They also include fully-stacked bars, mood lighting, mirrored roofs and heavily tinted glass surfaces for complete privacy.

Apart from the fact it has strong blue-collar appeal, the Ford F-650 is also a cool car due to its colossal size, and to make a stretch limo out of one is utter madness. The final results are nothing short of amazing, but some people admit the interior can look a bit tacky. But, if you turn a blind eye and look at any F-650 stretch just from the outside, you’ll see one of the coolest limos around made from one of the most iconic American trucks ever built.