For the new models in 1951, Chrysler introduced a revolutionary 5.4-liter, 331 Hemi V8 engine with 331 CID of displacement. To produce it, they mounted a single camshaft in the block of the engine and added valve lifters. This turned out to be the most common configuration for the Hemi V8. In regular models, the 331 Hemi delivered 185 HP. Chrysler also named it “Fire Power” for marketing purposes.

The power output was outstanding by the standards of the day. Immediately, those Hemi-powered Chryslers became hot cars on the market. They produced the first generation of the 331 Hemi for four years, from 1951 to 1955. Interestingly, people didn’t consider the early Hemi engines as durable as other V8s. This is because drivers needed to have regular valve adjustments due to the combustion chamber’s shape. 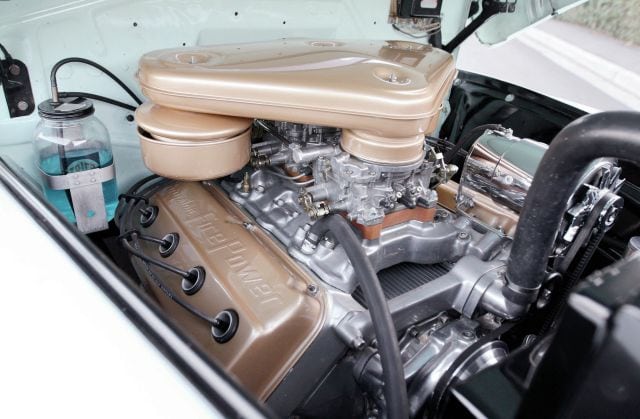 Chrysler introduced the 354 V8 engine in 1956 and marked it as a continuation of the Hemi engine family. It had a bigger displacement at 5.7-liters, better internals and intake system and more power. In standard form, it produced a lofty 280 HP. But when they equipped it with a bigger carburetor and different camshaft, it produced 355 HP. That was unheard of in 1956.

Historically, the 354 V8 with 355 HP in the Chrysler 300 B was the first American engine with one HP per cubic inch of displacement. They used the 354 Hemi in Chrysler and Imperial models, as well as a small amount of heavy-duty Dodge trucks at the time.

In a relentless quest for performance, Chrysler introduced an even bigger, more powerful Hemi for 1957. The new 6.4-liter engine came with 392 CID of displacement with 325 to 345 HP in standard form. Although the new block was bigger and the engine components were different, the characteristic Hemi head was still there.

For high-performance applications in the exclusive Chrysler 300 D coupes and convertibles, the 392 V8 delivered 375 HP. There was even an experimental fuel-injected version that produced 390 HP that they installed in just 16 cars. In those days, fuel injection was a revolutionary technology, but it wasn’t dependable.

All early Chrysler Hemi engines displayed amazing tuning potential, so they used them in drag and stock car races all over America. However, the 392 was the favorite since it had a stronger block that could withstand higher horsepower and forced induction. 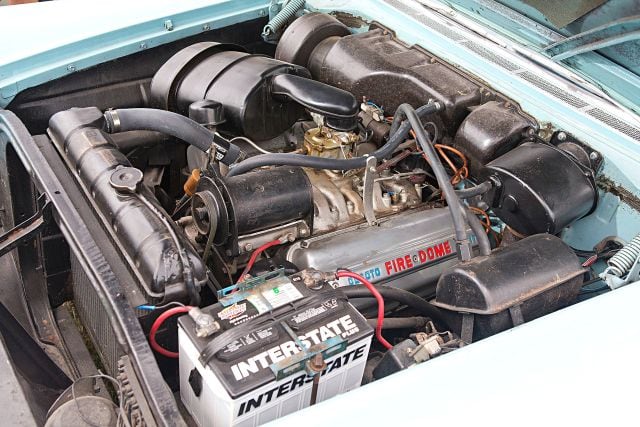 Back in the 50’s, the De Soto Company was an integral part of the Chrysler Corporation and a strong seller in the middle of the market range. The economy brands were Dodge and Plymouth. De Soto was positioned above them, and Chrysler and Imperial were at the top of the range. Unfortunately, due to weakening sales, they discontinued the De Soto brand in 1960.

However, before it made automotive history, De Soto offered four versions of the Hemi engine, which they called the Fire Dome V8. The first De Soto Hemi V8 was the 4.5-liter, 276 CID engine with 160 HP. They based it on the Chrysler 331 Hemi, but it came with a smaller bore and stroke. It emerged in 1952 and proved to be popular until 1955 when they discontinued it.

The next version was the 291 CID Fire Dome V8 with 170 HP. It was an improved 276 with slightly bigger displacement and power. De Soto only produced this engine in 1955. However, for 1956 and 1957, De Soto produced two bigger, stronger Fire Dome 5.6-liter engines that featured 341 and 345 CID of displacement, respectively. Using 9.5:1 high compression heads, those Hemis delivered 345 HP, making the De Soto one of the most powerful production cars in America in its heyday. 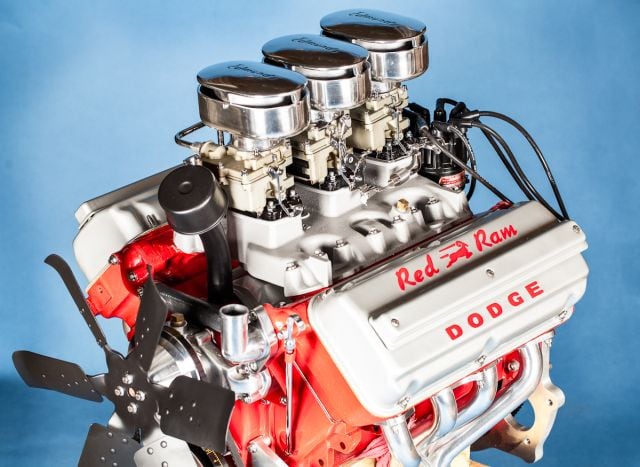 Like Chrysler, Imperial and De Soto, Dodge also offered its own version of the Hemi V8 during the ’50s. Like De Soto, it had its own displacement and power ratings. The first Dodge Hemi was the Red Ram in 1953, but they downsized it to the Chrysler 331. In the Dodge version, it had 241 CID, 3.9-liters of displacement and delivered 140 HP.

In the late ’50s, Dodge produced two versions of the Hemi with 315, 325 CID, 5.2-liter that delivered around 200 HP. Those engines were rare and featured some modifications from the regular Chrysler Hemi. Dodge reserved the 315 and 325 V8 engines for their top of the line models in 1957. 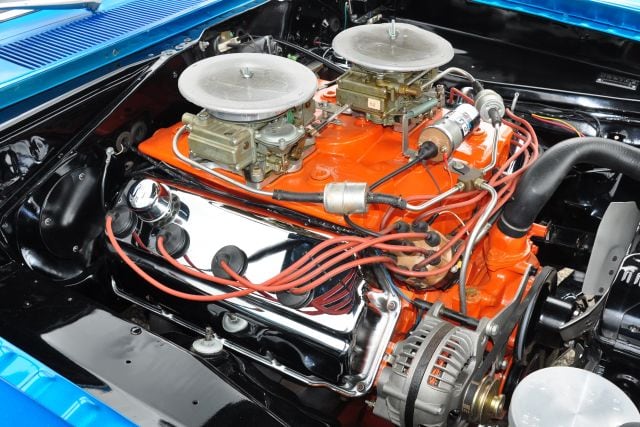 Chrysler stopped producing the first generation Hemi engines in the late ’50s due to the rising costs of production and somewhat delicate mechanics. Due to their performance potential, early Hemis, especially the 392 V8 were popular with racers. So, in the early ’60s when Chrysler wanted to go racing, their engineers proposed a new, second-generation Hemi. It would have improved mechanics, bigger displacement and most importantly, lots more power.

In 1964, the race Hemi 426 was not a street-legal engine but in fact, a racing motor. It had 12.5:1 high compression heads and a special intake system and manifold, as well as a new 7.0 liter block featuring 426 CID of displacement. They intended the new race Hemi 426 for use in drag racing and NASCAR racing. Depending on the application, the power was from around 500 HP to over 800 HP.

Different championships had different propositions and regulations, so for NASCAR, the intake was limited. But, for NHRA drag racing, lots of racers used fuel injection and multiple carburetor set up, so the power levels varied. However, the new race Hemi 426 was a clear winner as soon as it came out in 1964. 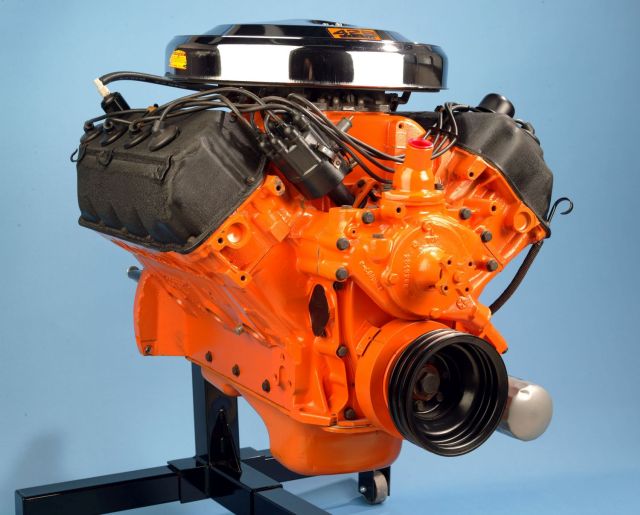 Due to the high demand from performance enthusiasts to produce a street version of a race Hemi, Chrysler started developing a street legal set up for its Plymouth and Dodge products. Chrysler couldn’t use the Hemi engine since the nature of the 426 Hemi didn’t mesh with its restrained, luxurious brand image. However, for the lower-priced Dodge and Plymouth brands, this engine was the perfect addition to their lineup and a strong attention-getter.

They presented the street version of the mighty 426 Hemi in 1966. It featured a four-barrel carburetor and a lower 10.5:1 compression ratio with the same basic block and heads as the race variant. The factory rated the 426 Hemi at 425 HP but it was clear the engine produced more. In fact, most historians agree the real output of the 1966 to 1971 street Hemi was over 500 HP.

Such power required a heavy-duty suspension, frame and gearbox as mandatory options. Today, those original Hemi cars are extremely expensive and rare. This is because they only produced about 10,000 original 426 Hemi engines from 1966 to 1971. Chrysler stopped production in 1971 since the Hemi was not compliant with the newly-introduced emissions standards.

They also installed Hemi engines in numerous racing cars and racing boats. In fact, they even put them in a few models of other small manufacturers, such as the Monteverdi Hai 450. Due to enormous power and tuning ability, car fans consider the Hemi 426 the most legendary engine of all time. 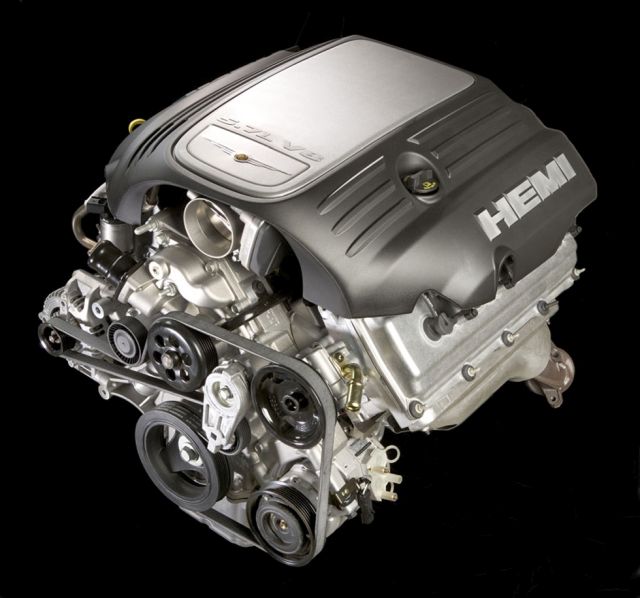 For over 30 years, Chrysler didn’t produce a Hemi engine or anything like the original concept. The company produced a lot of interesting, powerful engines, but nothing with hemispherical combustion chambers. Although the Hemi was absent from the market after 1971, the popularity was bigger than ever. That was especially due to classic muscle cars becoming popular and highly sought-after collectibles.

That is why Chrysler decided to revive the Hemi engine, although in modern form with modern construction techniques and materials. In 2003, they installed the first modern Hemis in the Dodge Ram. It featured 5.7-liter displacement and 345 HP.

The basic construction with two valves per cylinder and the push-rod design stayed true to the original concept from 1951. You can find the modern 5.7 Hemi in numerous Chrysler, Dodge and Jeep models up until 2009 when it received its first makeover. 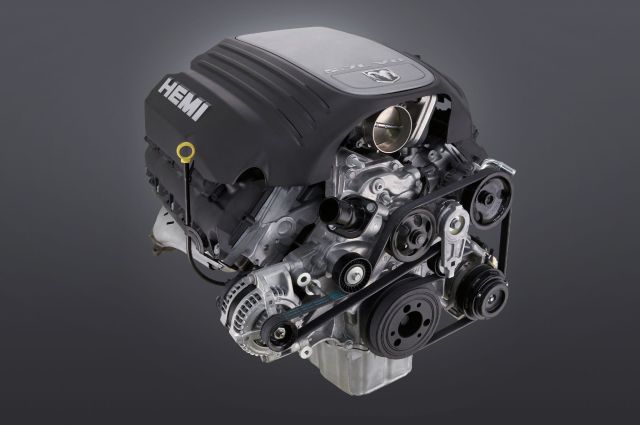 For the 2009 model year, Chrysler revised its popular Hemi with numerous upgrades including Variable Camshaft Timing. It also featured cylinder heads with a better flow, an upgraded engine electronic system and a new generation of the Multi Displacement System (MDS).

The power output had risen, so the base 5.7 Hemi now produces 363 HP to 395 HP in some applications. Despite the archaic construction design, modern Hemi engines are surprisingly efficient and compliant with all emissions standards. 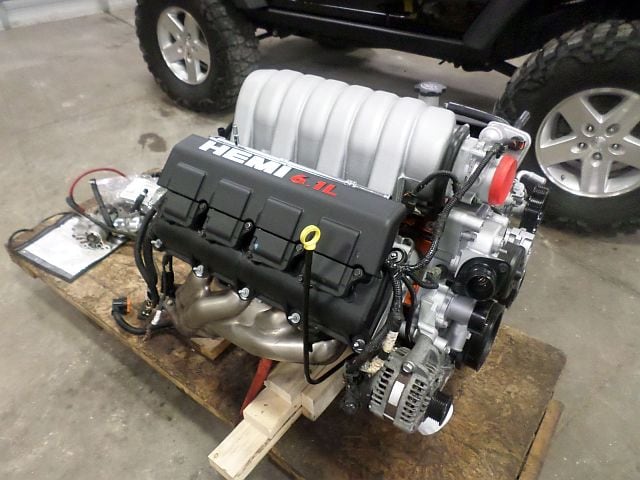 The modern Hemi engine provides a great basis for further development, so it was not long before Chrysler introduced the next version. It came with upgraded displacement, power and torque. In 2005, in the SRT models of Chrysler, Dodge and Jeep, the new Hemi performance version appeared.

It was a 6.1-liter Hemi with different blocks and heads to allow better cooling and flow. The power output was hefty at 425 HP. That was a new milestone for naturally aspirated engines. Also, this was an interesting historical moment since the new Hemi matched the output of the old 426 Hemi engine, or at least the advertised output. 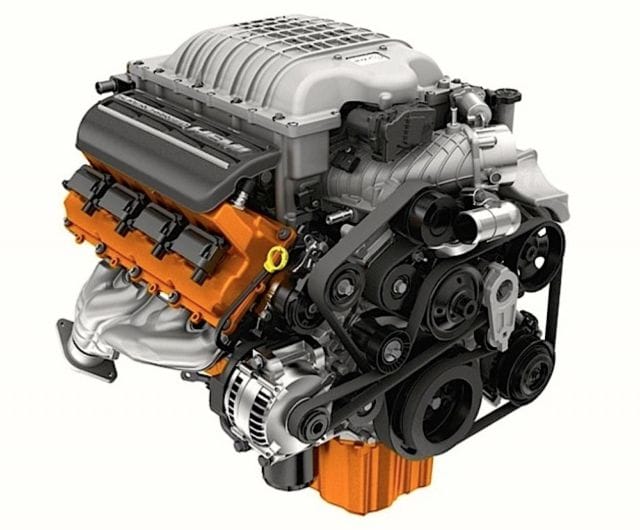 The most popular, highly sought after third-generation Hemi engine is the famous 6.2-liter Hellcat V8. This engine was born when Chrysler engineers mounted an enormous 2.4-liter supercharger on top of the already powerful stock Hemi V8.

The result was astonishing with 707 HP and 650 lb-ft. It is one of the most powerful street-legal engines currently on the market as well as one of the most powerful muscle engines ever. They first intended it for installation in the Challenger Hellcat. However, due to high demand, it is available in the Charger Hellcat and from 2018, in the Jeep Cherokee Trackhawk, too. 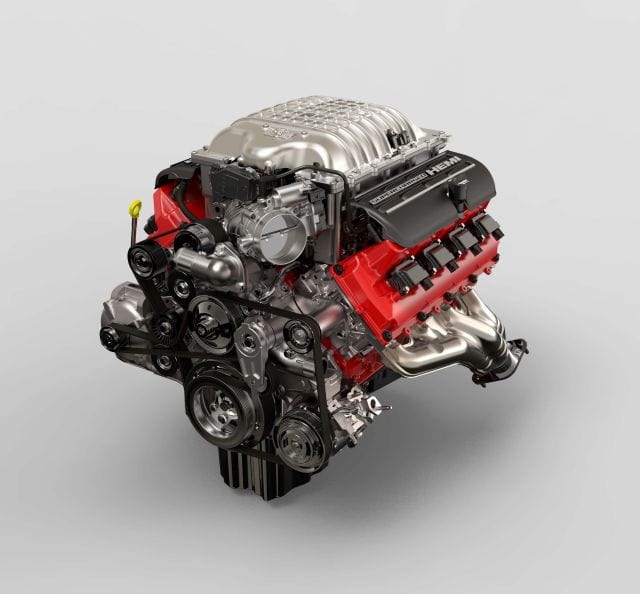 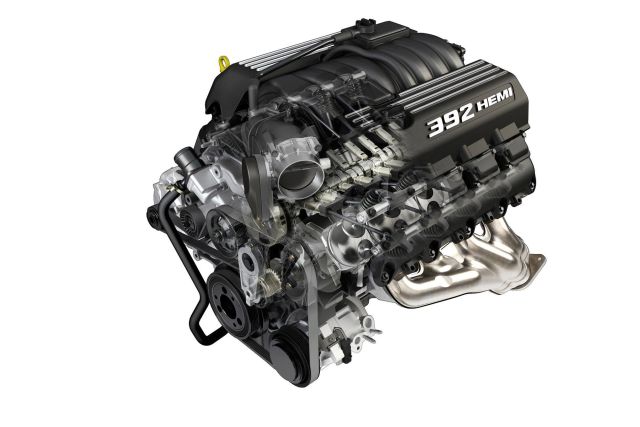