Sometimes, manufacturers lie not because they want to impress buyers or hide something, but because they need to sell the car. Back in the late ’60s, GM had a rule that forbade manufacturers to produce cars with more than one horsepower for every 10 pounds of a car’s weight. This rule was aimed at stopping manufacturers from producing insanely overpowered models All of GM`s products and brands had to follow this. The only exception was the Corvette. In 1968, Pontiac introduced the new Firebird with the 400 V8 engine, which rated at 320 hp.

Immediately after introduction, car fans were publicly asking the factory why the new 400 V8 engine in the Firebird rated at 320 HP while the same 400 V8 engine in the GTO was 366 hp. Pontiac didn’t reply. Yet soon the answer came from the insiders of the factory. The new Firebird 400 weighed 3,300 pounds. So in order to make it eligible under the GM one hp per 10-pound rule, Pontiac had to rate the 400 V8 engine at 320 hp. Of course, Pontiac knew their fans would see through this stunt, but they needed to do it in order to sell the new model to the general public.

In SRT 4 form, the otherwise ordinary Dodge Neon was a true performance car with great potential and a cool secret. Since the Neon was conceived as an economy compact to battle Japanese and Korean cars, it was equipped with low-powered four-cylinder engines and dull drivetrain options. But Dodge wanted to make it a competitor in the hot hatch class, and that meant the Neon needed more power under the hood and a new name. The SRT 4 means “Street Racing Technology” and the number four designates the number of cylinders. Under the hood was a 2.4-liter four with a turbocharger. At first, it had 215 HP and the number later rose to 230 hp. With this powerplant, the Neon SRT 4 was a fast and nimble car that soon earned respect on the street. 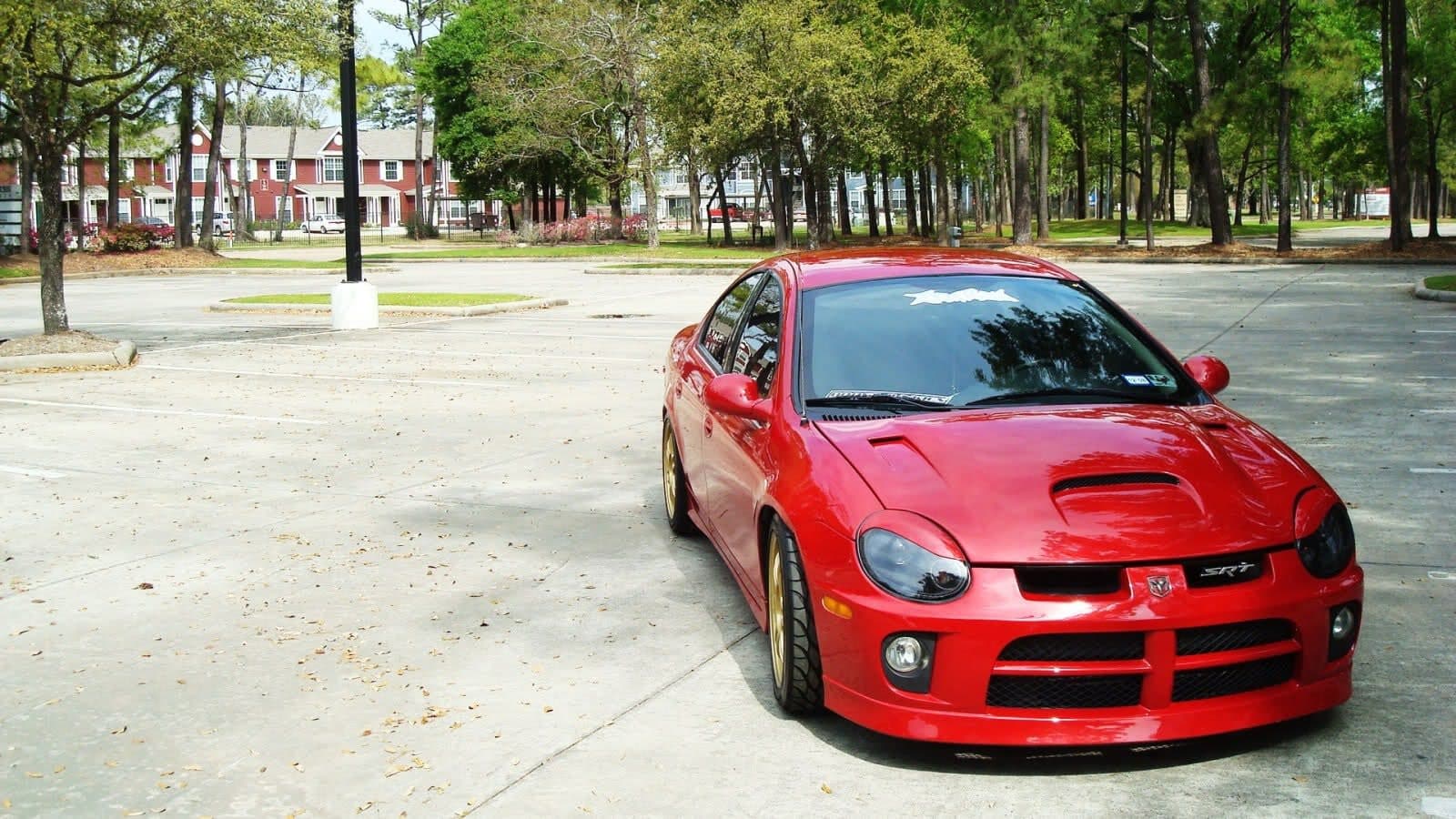 Street racers found out the Neon’s engine was easy to tune to achieve high horsepower ratings. Jumping from the stock 230 hp up to 330 hp was just too easy. Soon, rumors started that the stock SRT 4 engine was much powerful than the factory stated because drivers could easily pass the 300 hp mark if they put on just a few bolt-on accessories and did a mild tune-up job. The factory didn’t issue any statements until the Edmunds.com test team took one stock Neon SRT 4 and tested it. The result was an impressive 285 hp from the factory. No wonder the Neon had such a good performance and was the favorite with the street racing crowd.

The story of the gorgeous Ford GT starts in the mid-’60s when they introduced the GT40, a racecar created with the sole purpose to beat Ferrari on the race track and in the legendary 24 Hours of Le Mans race. The beautiful racer did just that four times in a row, shaming Italian racecars and stopping their winning streak. The original GT40 was called that because it was only 40 inches high. Almost 40 years after the release of the original car, Ford returned with the GT, a modern take on the classic form. In contrast to the original car, which was a pure racing machine, the modern-day Ford GT was a sports car with no racing intentions. Produced between 2005 and 2006, the Ford GT featured retro-futuristic styling and the same proportions as the original car.

However, behind the driver wasn’t a big block 7.0-liter engine but a modern, 5.4-liter supercharged V8. This unit delivered 550 hp, which was more than enough to attract the attention of sports car fans and become one of the most powerful cars of the day. But today there is actual proof that Ford was shy about the power figures and that the GT produced significantly more than they stated. Since the production of the Ford GT was big at around 4,000 models, some owners measured the car’s output. The results were astonishing and a perfectly stock GT delivered over 620 hp. Since it had a supercharged engine, various states of tune and different fuels could produce even more power.

From 1966 to 1971, the Chrysler Corporation produced the infamous Hemi 426 engine, the definitive muscle car engine of all time. It was the top-of-the-line engine option for select Dodge and Plymouth muscle cars. It was the most expensive and also the most powerful. The name, “Hemi,” comes from hemispherical combustion chambers inside the heads of the engine and “426” is its displacement measured in cubic inches. This engine was officially rated at 425 hp throughout its lifespan, but everybody knew this number was a joke. The Hemi technology allowed this engine to achieve a much higher rpm range than the standard big-block V8 engine of the day, and that meant more horsepower and torque.

Big valves allowed much better airflow, which also helped the power. Straight from the box, the Hemi 426 could produce around 500 hp without any problem. Most owners decided to do some modifications like new carburetor jets to easily get 550 hp without much work. That’s more than 100 hp above the factory specifications. Horsepower has always been a way to distinguish fast cars from slow ones, but the statistics have not always been real. Although the car makers have their reasons, it’s easy to test them to find out the actual horsepower. Thankfully, today’s carmakers are more truthful about horsepower.

The Boss 302 was a model Ford intended for racing in the Trans-Am championship. Apart from the blackout hood, spoiler on the trunk, and other details, it featured a stiff, track-tuned suspension, a close-ratio gearbox, and a high revving engine. The car was light and without any unnecessary luxuries, so the performance was impressive.

Back in the late ’60s, Pontiac’s Ram Air engines were one of the hottest mills in the muscle car class. This engine featured a four-barrel carburetor with the famous Ram Air induction system. The ratings were 360 HP in its RA III form. They installed those engines in GTOs, making them the perfect street racers of the era. However, in 1969, Pontiac presented the Ram Air IV version of the same engine with the same advertised horsepower rating of 360 HP. The two engines looked the same, but the RA IV had much different internals underneath.

It had different engine heads, camshafts, and valves. It also had more compression and a higher rev limit. The Ram Air IV was capable of much more than 400 HP. However, the factory decided to rate it at 360 HP for insurance reasons. Unfortunately, the Ram Air IV was an expensive option so Pontiac didn’t make many of them.

Inspired by the wild SVT Cobra R’s from the ’90s, they didn’t name the 2003 model “R” since it wasn’t limited in production. Ford made it available to the public rather than just racing drivers and private teams. However, this SVT Cobra was an interesting, important model for the Mustang dynasty since it featured two firsts. It was the first factory supercharged engine with an independent rear suspension. For the SVT, Ford took the standard 4.6-liter block and mounted different heads and a supercharger to get 390 HP and 390 lb-ft of torque.

They named the engine the “Terminator.” The rumor was that it delivered more than the advertised 390 HP. In fact, it was much closer to 430 HP. To handle all that power and torque, Ford equipped the SVT Cobra with an independent rear suspension setup like the first Ford GT. This helped stability at high speeds and hard launches, making this Mustang handle like a dream.

The ’80s were the dark ages of muscle cars and American performance, but there were a few bright moments. One of the cars that restored faith in muscle car movement in the ’80s was the mighty Buick GNX. The story of this model is an interesting one. Back in 1982, Buick started experimenting with turbocharging its line of standard V6 engines. The results were satisfying, so engineers got permission to develop a performance version with better acceleration figures. Soon there was a Buick Grand National with 175 HP, which wasn’t impressive but was a start.

In the next couple of years, the Grand National got a bigger engine and more power, jumping from 175 HP to 200 HP and finally to 235 HP. With those numbers came the acceleration times of under six seconds. Those black Grand Nationals were quick cars. But in 1987 came the ultimate version Buick called the Grand National Experimental, or GNX for short. It featured the same 3.8-liter turbocharged V6 but with 275 HP and 0 to 60 mph times of 4.7 seconds. Lots of car enthusiasts claimed the GNX produced at least 300 HP since it was extremely fast. At that moment, Buick GNX was the fastest accelerating production model in the world. At $29,000 it wasn’t a bargain, but there is a widespread legend about owners who paid the lease on these cars by street racing them for money.