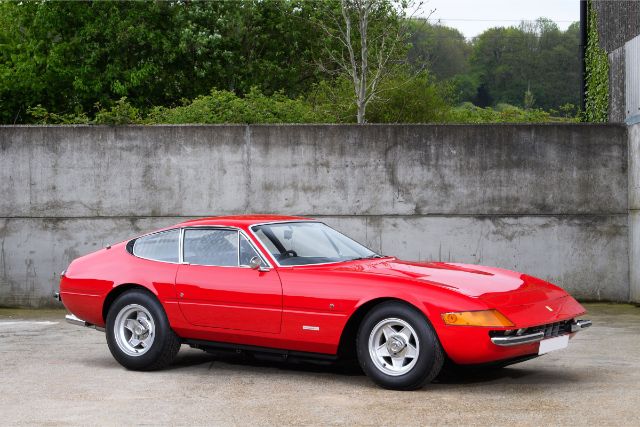 Colloquially called the Daytona, the Ferrari 365 GTB/4 was an immensely important model for the factory and one of the most memorable Pininfarina designs from the ’60s. The car featured a race-bred 4.4-liter V12 engine with four camshafts. They installed a multiple carburetor set up delivering 352 HP.

And then they topped all that off with an independent rear suspension and rear-mounted transaxle gearbox. The combination of Ferrari technology and timeless Pininfarina styling resulted in the bestselling Ferrari to date. In fact, they sold more than 1,400 of them in the five-year production run. 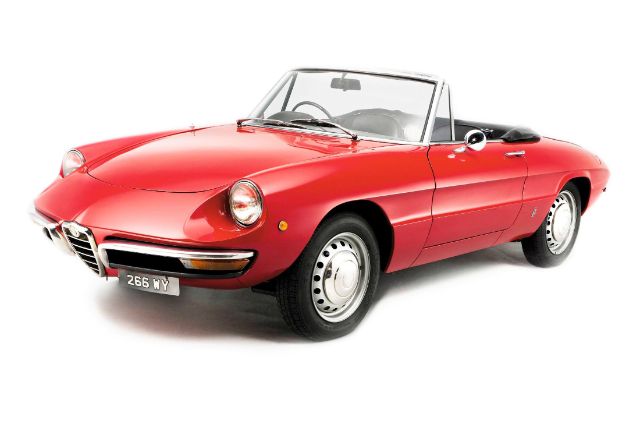 When Alfa Romeo introduced the Spider in 1966, it was the Italian answer to the popularity of British roadsters. Eventually, it would become globally popular and an Alfa Romeo model with the longest production run. Initially called the Duetto, the Spider was built on Alfa’s 105 sedan-coupe base with a Pininfarina-designed body.

In addition to that, it had all alloy twin cam engines and rear-wheel drive. During the late ’60s, the Spider became popular after the movie, The Graduate, in which Dustin Hoffman drove a red one. While the rest of the roadsters vanished from the American market, Alfa managed to sell Spiders all the way up to 1994.

That just shows how popular this car was in America. The engine choices ranged from 1.3 to 2.0-liter four-cylinder producing 105 to 130 HP. Earlier cars had carburetors, but the later models had fuel injection systems. 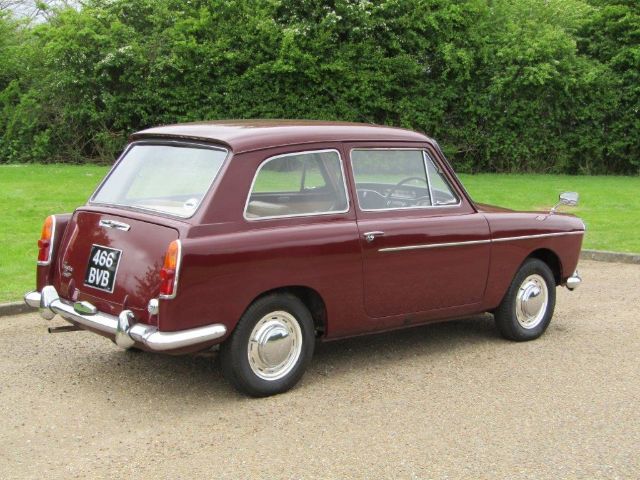 Even though most people connect the Pininfarina name with high-end cars and exotics, the company designed and produced a large number of ordinary cars. They even had a hand in introducing new styles to the industry. And one such example is the Austin A40 Farina.

This British economy car had a three-door layout with two-piece opening tailgate. Despite its diminutive dimensions, the clever engineering and design revealed a big trunk space, making this little car quite practical. 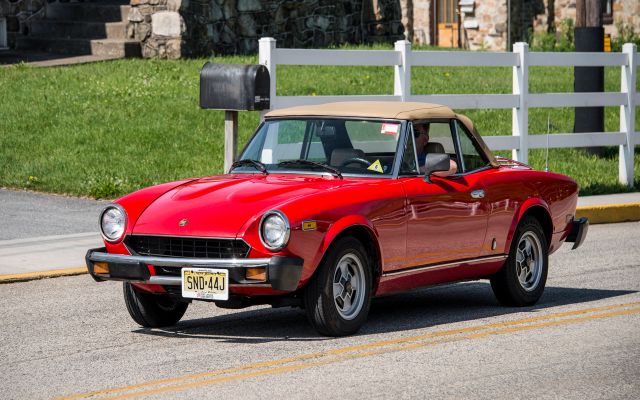 Fiat debuted the 124 Spider in 1966, selling it in America until 1985. Pininfarina designed the car and they built it on a 124 Sedan platform. The mechanics were straightforward with a twin-cam engine, four-speed manual transmission and rear-wheel drive. The early models got 90 HP from the 1.6-liter engine. But the later versions received the 2.0-liter engine with fuel injection and 102 HP.

The 124 Spider was one of the more comfortable options. It featured a roomy cabin, big trunk, and good ride quality, so nice examples are highly-sought after. But don’t worry, Fiat built over 200,000 124 Spiders, selling most of them here in America. 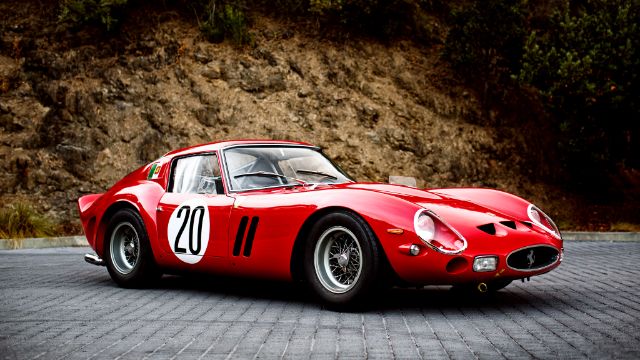 Probably the most legendary, sought after and valuable classic Ferrari is the 250 GTO. Ferrari offered the car in 1962 as a high performance/racing version of the 250 series. But in fact, it was a separate model due to numerous changes to the engine and chassis. The 3.0-liter V12 delivered around 300 HP.

And that means the car was a sure winner on race tracks all over the world. This car was one of the first Pininfarina-designed Ferraris. But better yet, it cemented the relationship between these two giants of the Italian car industry right up until today. 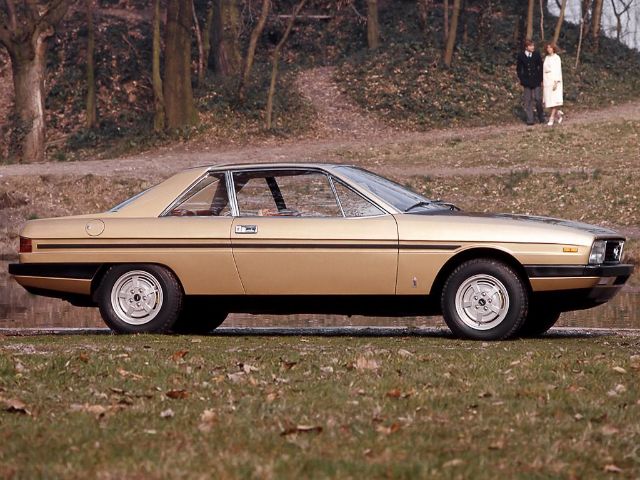 Pininfarina had a long and fruitful relationship with Lancia. And one of the most perfect examples is the Gamma Coupe. They built it on a Gamma four-door platform, while Pininfarina styled the Coupe, selling it in fewer numbers. It featured a spacious interior and lots of equipment, but also a quirky engine.

The Gamma had a 2.0 or 2.5-liter flat-four engine that provided the Coupe with interesting handling and driving dynamics. However, it was also a nightmare to maintain. Lancia made over 6,500 examples during its production run. But today, the Gamma Coupe is a rare sight, even in Italy. 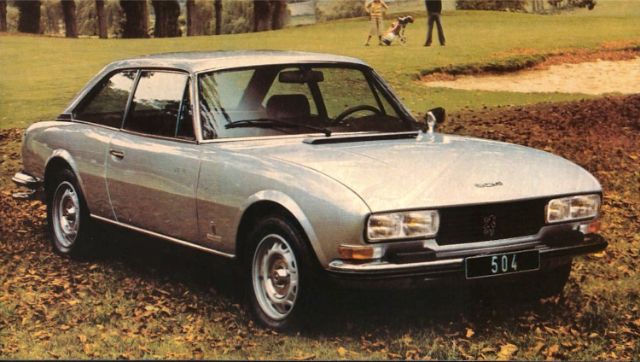 Designed by Pininfarina and built on a regular Peugeot 504 platform, the 504 Coupe is one of the best examples of an affordable yet classic GT car. It has a perfect design and proportions, as well as unmistakable elegance. Yet it can still carry four people in comfort and style.

Peugeot presented the 504 Coupe in the late ’60s and sold it until 1983. They made over 20,000 of them in various forms and versions. Most of the cars made came with four-cylinder engines, but the more powerful 2.7-liter V8 was also available. 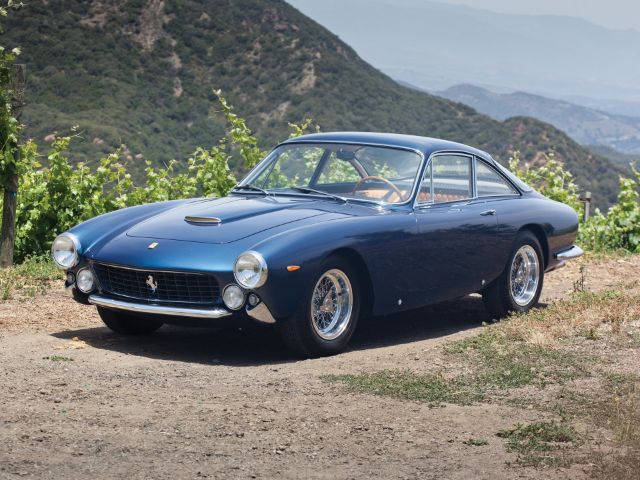 To mark the end of production of the fantastic 250 Series in 1964, Ferrari prepared the Lusso. It was a luxury version with a new body, a few improvements, and a beautiful design. It sold well, providing a positive end of an era for the factory and fans worldwide. The engine was a 3.0-liter V12 that delivered around 250 HP. And better yet, Ferrari installed several luxury features and added more interior space to make a ride more enjoyable in the true GT fashion.

Also, Pininfarina was again responsible for the design of this jewel, giving it an elegant silhouette with swooping lines. But best of all, it came with the minimal chrome trim and more interior space than other 250 GT series cars. 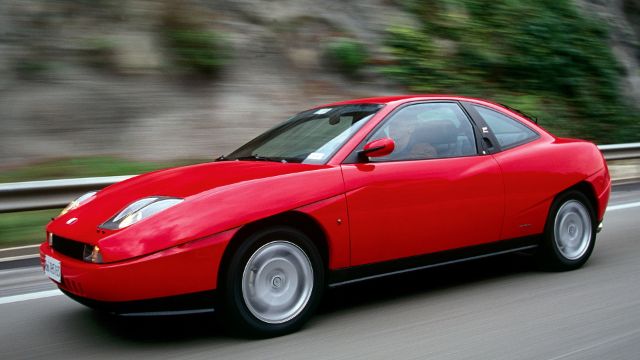 Fiat never imported this interesting car to the U.S., but now is eligible for import since it is older than 25 years. They presented the Fiat Coupe in 1993 and it stayed in production until 2000, selling in Europe and selected markets around the globe. The engine lineup started with rather anemic four-cylinder engines.

But it ended up with the potent 2.0-liter turbocharged five-cylinder unit producing 220 HP. And that was quite the power output for the early ’90s. In turbo guise, the Fiat Coupe was a fast car with unique Pininfarina styling. And it was a real head-turner wherever it appeared. With 0 to 60 mph time of 6.3 seconds, it is still quick by today’s standards.

Alfa Romeo left America in 1995 only to return in 2009. However, the last model Alfa sold in the USA was the gorgeous 164 Sedan. It came with the famous Busso 3.0-litre V6 engine with 210 HP. With a 0 to 60 mph acceleration time of around 7.5 seconds and the precise manual gearbox, it was a dynamic sedan.

Also, it had a fantastic sound and was cool-looking, too. Best of all, Pininfarina did the styling for this wonderful ’80s wedge four-door. And that is what makes it one of the more recognizable cars from the late ’80s. 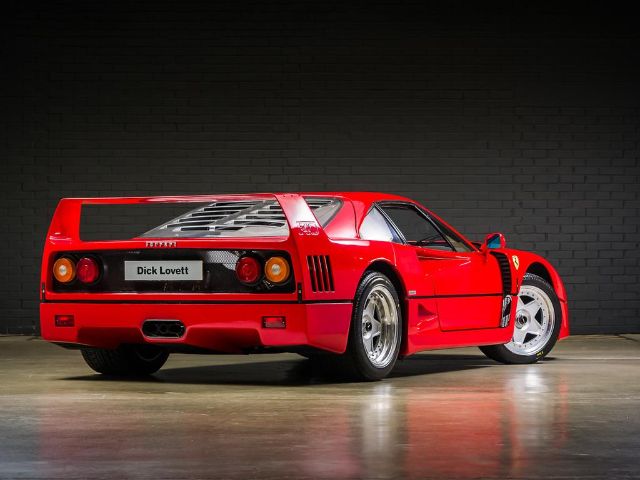 The Ferrari F40 was and still is a special car in many ways. They built it to commemorate the 40th anniversary of Ferrari. Designed by Sergio Pininfarina, it was a car Enzo Ferrari supervised and envisioned himself. To explain the F40 in a few words, this is a race car with a gorgeous body.

And the performance will terrify you as well as inspire you to drive this car as fast as you can. The F40 was one of the fastest cars of its time. In fact, it accelerates from 0 to 60 mph in less than four seconds in street-legal trim. The exact result is 3.8 seconds according to various magazine tests.

This infamous design house has provided almost 90 years of elegance. These are the most stunning cars designed by Pininfarina. Which one is your favorite? Start saving your money, since none of these cars is a bargain. However, they are all worth the investment if you are a serious Pininfarina fan.

Real Drivers Who Were Pulled Over For Completely Idiotic Reasons
POPULARCameron EittreimJune 30, 2022 34: Shift Kit That same driver was stopped again a few months later, this time...

Fast Sports Cars That Will Only Become More Valuable Over Time
CarsCameron EittreimJune 27, 2022 24: Chrysler Crossfire What makes the Crossfire special? Underneath the car is completely a Mercedes...

Sad Photos Of Real Cars That Were Ruined By Irresponsible Owners
POPULARCameron EittreimMay 27, 2022 34: No Alignment On a lifted vehicle, the alignment is one of the most important...

50 Worst Cars To Come Out Of The New Millennium
POPULARCameron EittreimMay 25, 2022 34: Pontiac Torrent For people born in the ’80s and ’90s, the word “torrent” is...
- Advertisement -
Advertisement
Please wait 5 sec.