In the early ’80s, Chevrolet introduced a brand-new and fully redesigned third-generation Camaro model, which featured modern styling with improved aerodynamics. The new Camaro was new inside as well, and it had better suspension and new engines. But the improvements didn’t mean performance since the base engine was a pretty anemic 2.3-liter four-cylinder with just 90 HP (via Auto Evolution).

The “Iron Duke” engine was known for its durability and later became the basis for many of GM’s four-cylinder engines. However, in the ’82 Camaro, it was a pretty embarrassing choice since the car had a 20-second 0 to 60 acceleration time. For the muscle car the Camaro has always been, this number was shameful and ridiculous. Fortunately, Chevrolet offered a V8 option so performance lovers had something to look forward to.

You are probably familiar with the original Dodge Charger Daytona from 1969, a big coupe based on Dodge Charger with a pointy nose and massive rear wing, designed for racing in NASCAR and produced in only 500 examples. Less than 10 years after the memorable Daytona, Dodge decided to use this glorious name again in a terrible case of self-reinventing (via Garage Kept Motors).

They did it this time on the Dodge Charger, which was a Chrysler Cordoba, a two-door luxury coupe with no muscle car credentials whatsoever. The move was not well-received since the Cordoba had a lame 145 HP V8 engine and was more focused on luxury than performance and driving dynamics. Fortunately, buyers punished Dodge for using the precious Daytona nameplate.

So what happened in just 10 years, and where did all those horses go? The recession, emission standards, and safety regulations appeared and killed almost all performances from the legendary Corvette. The 1980 Corvette was kind of a dinosaur with old technology under its plastic skin, lazy engines, and an outdated interior.

Very similar to the Plymouth Volare Road Runner, Aspen R/T was Dodge’s effort to present a muscle car in the period when such vehicles were almost impossible to construct and sell. However, the Dodge Aspen R/T looked like the real deal and even possessed some power to distance itself from similar attempts of other brands with disgraceful power outputs. Under the Ram Air hood of the Aspen R/T was a 360 V8 engine with 170 HP (via Hemmings).

The selling point of this car was the looks. It came fully equipped with all the bells and whistles of the late muscle car era. It’s just too bad that these cars didn’t have the power of their ancestors since they could have easily earned top spots in muscle car history. Of course, similar to the Volare, the Aspen had big problems with rust so there are just a few surviving examples today.

The Ford Thunderbird isn’t a car you would typically consider a muscle car. Still, in the ’80s, Ford introduced a couple of Thunderbirds that could have that designation. They were billed as an exciting addition to the performance car scene in those days. Although the T-bird was available with a V8 engine, the best performing version was the Turbo Coupe introduced in 1987 (via Ford Authority).

The TC received a Mustang SVO, 2.3-liter turbocharged four-cylinder engine with a manual transmission, 190 HP power level, and top speed of whopping 143 mph. The top speed was affected by the relative lightness of the car and the aerodynamic shape of the ninth-generation Thunderbird.

Although the Capri from the ’80s was just a Fox-body Mustang with a different grille, one particular version deserves much more attention. American Sunroof Company (ASC) was known for convertible versions of various production models in those days. They teamed with Ford to produce two-seater roadster variants of the Mustang and Capri (via ASC McLaren).

But Mercury also had a deal with McLaren. In 1984, they introduced a unique model called ASC McLaren Capri. The cars were available as coupe or convertibles with many improvements over standard models. The 5.0-liter V8 had 210 HP, which was a significant increase over other models. There were different details, fog lights, unique wheels, and body kits. The overall production was low and the ASC McLaren line was discontinued in 1986.

The model name Magnum might sound familiar since Dodge used it in a successful line of station wagons from 2005 to 2008. However, the Magnum dates as far back as 1978. The original Dodge Magnum was a luxury muscle car coupe Dodge produced for two years in 1978 and 1979 (via Hemmings).

For the time, it was a cool-looking coupe with all the right ingredients. It had rear-wheel drive, a long hood, a short deck, and a thumping V8 in the front. The biggest engine Dodge could order was a 5.9-liter V8 with 195 HP. The Magnum delivered pathetic performance numbers with its considerable weight, slow automatic transmission, and low power. Also, the high price didn’t help sales. Dodge discontinued the Magnum for the 1980 model year.

Introduced in 1978, AMC Spirit AMX was an actual compact muscle car due to the fact it had an optional 304 V8 engine, rear-wheel drive, and manual transmission. AMC designed it as a performance version of the Spirit compact car (via Silodrome).

On sale for just two years, the Spirit AMX had some success due to the fact it was inexpensive and cool-looking. The AMX package included a body kit, special livery, and wide wheels. Unfortunately, AMC decided to kill the model, and the Spirit AMX did not return for the 1980 model year.

We all know Plymouth Roadrunner as one of the quintessential classic muscle cars that always had performance and power. However, for 1975, Plymouth moved the Roadrunner as an option on the Fury line (via MotorTrend).

The Fury Roadrunner had a 440 V8 option with 260 HP on paper. Despite this being a respectable number for the day’s standards, the 0 to 60 mph times were over eight seconds which is something that today’s cheapest economy cars can match. As a result, sales were pitiful.

When the Javelin AMX was discontinued, AMC was left without any muscle car in their lineup. So they quickly decided to introduce the Matador X. The Matador was redesigned for 1974 and featured a signature coupe body style. The company presented the “X” package, which could be had with 360 V8 or an optional 401 V8 with 235 HP (via Old Cars Weekly).

Regardless of the dress-up kit and big V8, the Matador X wasn’t any faster than the Javelin and the option was killed after only one year as a result.

Domestic car buyers were pretty surprised when Pontiac introduced an attractive 2+2 package for its popular luxury coupe in 1986. It was a muscle car the company had lacked since the late ’60s and an interesting version of the rather dull Grand Prix (via Hemmings).

Very similar to Monte Carlo SS Aerocoupe, the Grand Prix 2+2 used the same platform, rear glass, and rear spoiler intended for NASCAR races. Unfortunately, Pontiac didn’t provide 2+2 with exciting performance since all cars got the 305 V8 with 165 HP. On the other hand, Grand Prix 2+2 handled much better than the Aerocoupe because of its gas-filled shock and stiffer springs. Pontiac produced this model for two years, making only 1225 cars while eventually discontinuing the model.

Even though the Charger from the late ’70s was a slow car that threatened to kill the muscle car reputation of the glorious late ’60s and early ’70s cars, Dodge felt that the name deserved another chance (via Classi Cars).

In those days, the Chrysler Corporation was all about K-platform front-wheel-drive cars. Dodge introduced the Charger as an option on a compact and boring Dodge Omni in 1981. The appearance package proved somewhat popular, enough to convince Dodge to try it as a separate model for 1983. That was how the L-Body Charger was born.

Ford built this exciting car with the help of the well-known McLaren racing team. The whole idea behind the project was to take the 2.3-liter turbo engine from the regular Mustang and transform it into a street racing beast. They added a race-tuned suspension, a lightweight body, and a host of other modifications. McLaren and Ford installed a tuned turbo engine with 190 HP. That was a big number for the day, especially coming from 2.3 liters (via The Drive).

They changed the looks of the Fox Mustang, as well. The updates resulted in a performance level that was good for the standards of the day but is quite embarrassing today. The driving dynamics were excellent, but the car came with a high price tag, making it a sales failure as a result.

The mid-’70s weren’t an especially good period for Olds performance. When the new compact Starfire model was introduced, Olds engineers decided to present the performance version of this car. This model was called the Starfire GT and was an appearance package on a regular Starfire hatchback (via Motor Trend).

With unique body stripes, color, details, wheels, and stabilizer bar, the Starfire GT was more dynamic than the regular model and the closest thing Oldsmobile had to a sports or muscle car in 1976. That still wasn’t enough to make it rank anywhere near the best muscle cars.

The second-generation F-Body Firebird was introduced in 1970, and by the late ’70s, was one of the dominant cars in the segment. Unfortunately, the days of big cube motors and high horsepower ratings were gone, so Pontiac decided to invest in new technology to generate power. That new technology was turbocharging, and in late 1979, it introduced the Trans Am Turbo (via Driving Line).

The engine in question was a 301 V8 with a Garrett turbocharger bolted onto it. The power output was relatively modest at 200 to 210 HP, but the torque number was high at 340 lb.-ft, which resulted in a hint of performance. However, it was miles away from the big-block performance Firebird fans had come to expect from the model. 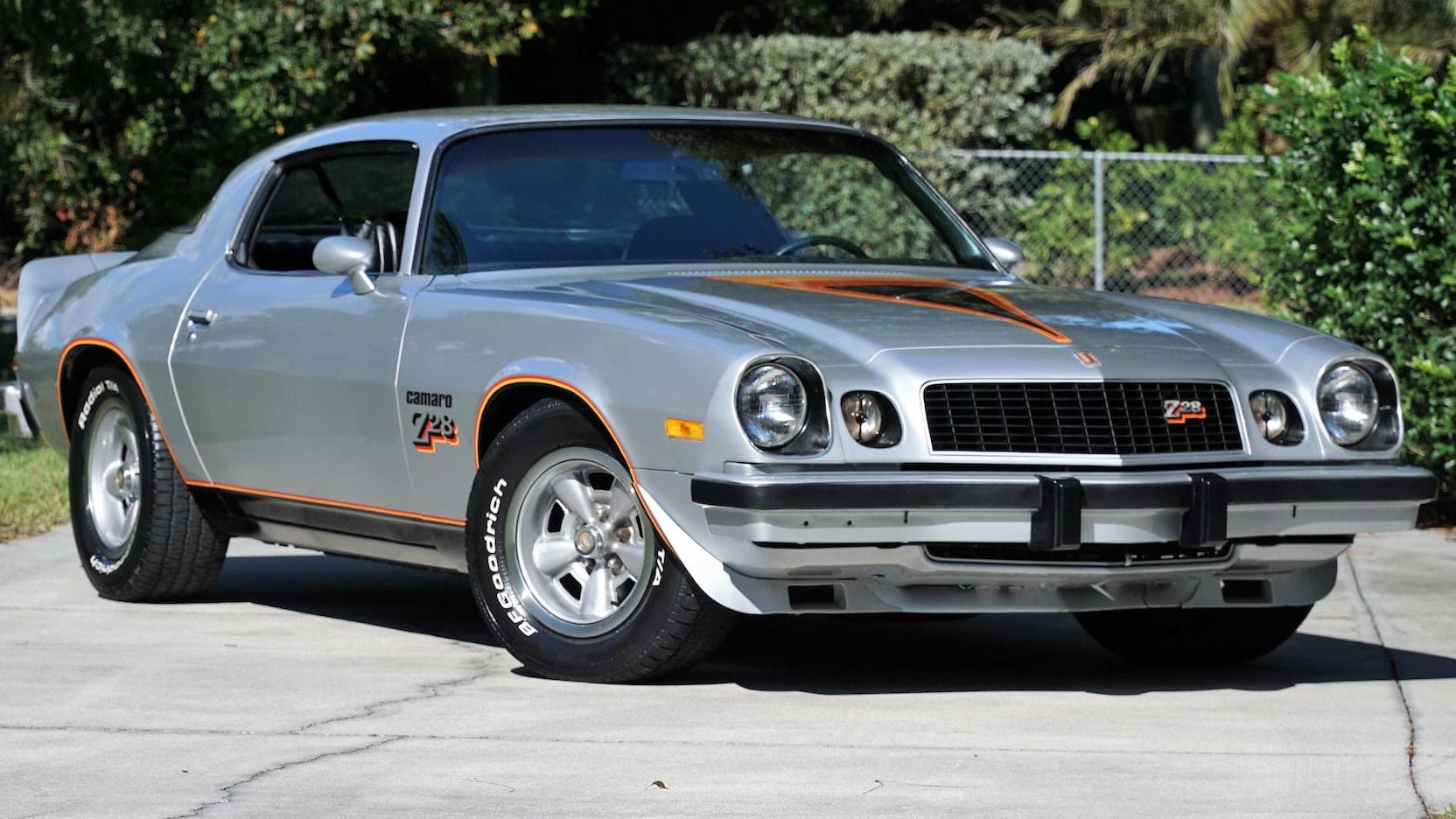