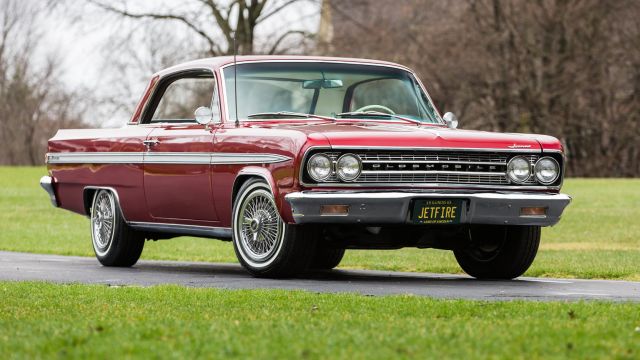 The Oldsmobile Jetfire is an important model for the automotive history that never got the respect it deserved. This was the first turbocharged passenger car alongside the Chevrolet Corvair Monza. However, the Oldsmobile system was more complex and powerful than the Chevrolet system. In those days, each GM division was in competition to present something better than their competitors.

So, Oldsmobile chose turbocharging as the new technology to perfect. The GM engineers took the compact F-85 model and retained its small 215 cid V8 engine that developed 185 HP. They gave it a new forced induction intake system that included a Garett turbocharger. They added a special “Turbo Rocket Fuel” tank consisting of distilled water, methanol and a corrosion inhibitor mixture they injected into a fuel-air mixture to prevent detonation.

This was necessary since turbochargers were prone to detonation in those days, which could ruin the engine. For the standards of the day, the Jetfire V8 was state of the art technology and initially, the market was interested. The new V8 delivered 215 HP, which was one HP per cubic inch, making it one of the best performance cars of the day. With the 0 to 60 mph time of eight seconds, it was almost as fast as the Corvette.

The Jetfire had problems from the beginning, but most issues were owner-related. People praised the power delivery, but they weren’t used to maintaining a turbo engine. Most owners forgot to fill up the “Turbo Rocket Fuel” tank. This caused a loss of power and even failure of the engine in the long run.

Soon, the Jetfire developed a bad reputation despite the praises of automotive magazines. After just two years and around 10,000 Jetfires, Oldsmobile decided to kill the car and turbocharging technology.