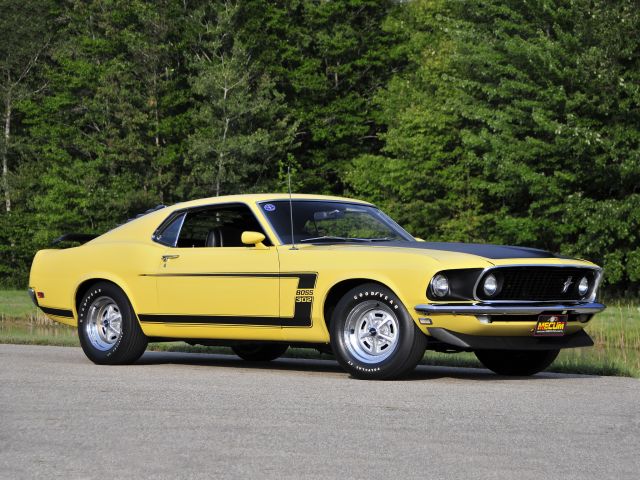 The third redesign of the Mustang emerged for the 1969 model year and it grew in size once again. Ford changed the engine choices as well as the equipment list. They focused the Mustang lineup in two main directions. One direction was a luxury car with the new Grande notchback model. The other direction was a pure muscle car with three new models, the Mach I, Boss 429 and Boss 302.

With these models, Ford introduced the legendary 428 Cobra Jet engine. It became a regular production option that put the Mustang among the fastest muscle cars of the era. But for many people, the Boss 302 is the most important model. Ford produced it for only two years, in 1969 and 1970. The Boss 302 featured a 302 V8 engine they conservatively rated at 290 HP. However, the real output was closer to the 350 HP mark.

Ford intended to use the Boss 302 for racing in the Trans-Am championship. Apart from the blackout hood, spoiler and other details, it featured a stiff, track-tuned suspension, close ratio gearbox and high revving engine. The car was lighter due to the lack of any unnecessary luxuries.

This model belongs on this list because it was perfectly balanced with great performance and driving dynamics. It was a muscle car, but its handling characteristics, high revving engine and overall feel made it more of a sports car with racing success. Basically, it’s the best of both worlds and a unique model in Mustang’s long history.