As a concept, Cars and Coffee is truly amazing. In theory, it is all about car owners and enthusiasts gathering around, talking about cars and enjoying the day. There are no classes, no competitions of any sort, just plain appreciation of cars as such. You can expect to see both classics and exotics, hot hatches and expensive GT coupes, modern and vintage muscle cars all in one place, and their owners hanging out together.

But, in practice, Cars and Coffee events became pretty dangerous. From time to time, some car owners see them as opportunities to show off. A crowd of people and octane talk can do wonders to hot headed car owners who want to leave in big style. So, burnouts and full speed exits are a common occurrence. While that looks, sounds, and even smells fantastic, it doesn’t always work out the way it was supposed to. When things get out of control, the results can be catastrophic.

Usually, it’s the Mustangs. We’ve seen so many clips of hot headed Mustang owners losing control of their cars and skidding everywhere. Off the roads, into the trees, into other cars too. There are so many memes about this, and the owners seem not to care because idiotic Mustang crashes happen all the time. 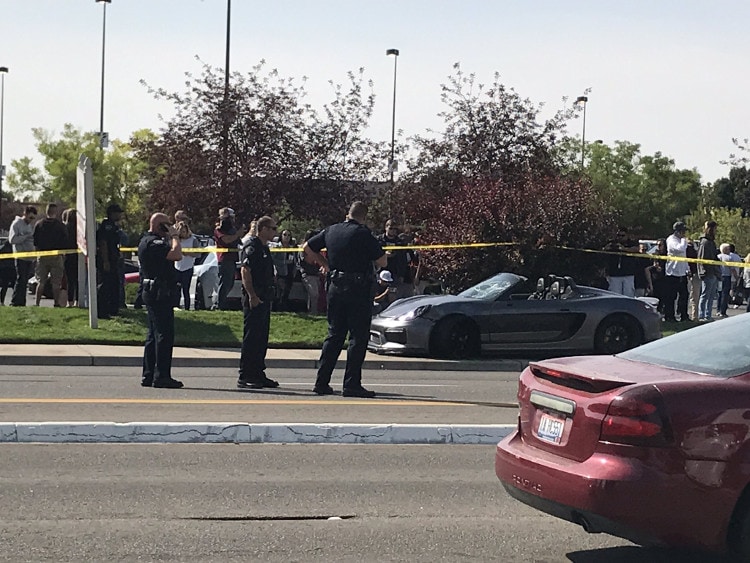 Crashes like these are always funny until someone gets hurt, and sadly it happens too. One of the most recent tragic crashes miraculously didn’t involve a Mustang, but a Porsche Boxster. Upon exiting a Cars and Coffee event at Boise, ID, the driver plowed right through the crowd, injuring 11 people in the process.

While trying to show off, the owner lost control of the Boxster, climbing onto the curb and plowing through the spectators. Per news reports, five out of eleven people were taken to a hospital in an ambulance. Luckily, both the ambulance and the police reacted on time, and the driver of the Porsche gone wild cooperated too.

Distressing footage shows just a fragment of the accident. There’s a crashed Porsche on the pavement and injured people lying on the ground. The driver quickly exited the car and went to help the people he just hit. After the accident, the police closed some the road to investigate what exactly happened and how.

While it is certainly unusual because there are no Mustangs, this is a textbook Cars and Coffee accident. It follows a proven recipe: an inexperienced driver with an ego his skills can’t match and too much horsepower in his hands. While it’s definitely not the first, it is also not the last accident like this. As long as there are hot heads with ego issues, Cars and Coffee events will not be 100% safe.

If you’re reading this as a driver of a high performance car, please don’t. Just don’t try to impress anyone on these events. It’s better to see a static car than a car in all kinds of wrong motions. And if you are a car enthusiast who’s on foot, be careful, it’s dangerous out there.