What happens when you put a d gen Honda Civic next to a Lamborghini Gallardo? Well, the answer is pretty obvious. With around 160 horsepower, the Civic has nothing against the mighty 500+ horsepower Lamborghini. At least that is if we talk about stock cars. Luckily for car enthusiasts all over the world, you can do a lot of things to make a Civic fast. Really, really fast. On the other hand, you can do that to a Lamborghini as well.

So, when you have two modified machines one next to another, the only way to see what’s really going on is a drag race. When it comes to cars like these two are, it’s really the best, purest test around. In drag racing, acceleration is the key element, and both these cars have their strengths and weaknesses. While the Lamborghini is more aerodynamic, the Civic is much lighter than the Italian bull, and so forth. 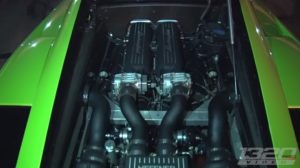 The Gallardo has twin-turbo power in the back

On a nighttime highway run, this Gallardo was attacked by not one, but two Civics! The first one sported a turbocharged K20 engine with a bit more than 650 horses. The second one has a turbocharged B18 with more than 700! Yes, you’ve read that well, seven hundred horsepower.

On the other hand, the Gallardo has Heffner Twin Turbo kit on its 5.0L V10 engine. During the run, it wasn’t running at full boost because it was using fuel pump gas, so it produced 780 horses. Even 780 horses is a huge jump compared to 500, so we’re a bit scared to hear what’s its maximum power output. 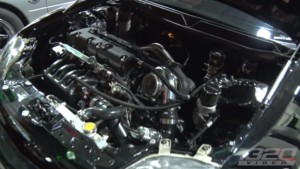 Civics have a set of mods too!

The video begins with owners explaining their mods in greater detail, and continues on the highway. There are two camera cars, one being the Lambo, while the other is a K20 Civic. In the first run, the Lambo smoked the B18 Civic quite easily. The run was accompanied by quite a glorious soundtrack coming from both cars.

The fun part was the second run, because the K20 Civic was next. Even though it had less horses, the Civic managed to outrun the Lambo, but that wasn’t it. After seeing the Civic run away from the Lambo’s point of view, the video switches to K20’s perspective. There, the Civic has blue flames coming out from somewhere under the hood.

The third and final run pits the Lambo against the B18 Civic again, and the little hatch has a much better pull this time. Shown from Lamborghini’s perspective, the tiny white compact gets way ahead, showing that there is really something about lightness that wins races. The Lamborghini catches up eventually, but the B18 Civic was a true winner.

Even though the green Gallardo didn’t use its full potential, it was still a very mean car with lots of horses packed behind the driver. That’s why these two Civics are true people’s heroes which have once again shown that a hatchback can do wonders when it has a true enthusiast behind the wheel. But of course, big mods also do the trick!