Even though the films teach us otherwise, there’s usually nothing glamorous and spectacular about armed robberies. Usually, it’s the guys who don’t look like the crew of Ocean’s Eleven who commit this acts of violence. On contrary, they rather look like a bunch of thugs who you wouldn’t want to meet in a dark alley. There’s no high tech equipment, state of the art coordination, nor crazy stunts like in The Italian Job.

There are however some exceptions to this rule, and from time to time we witness some otherworldly heists happening around the world. The Pink Panther crew is notorious for high stake jewelry thefts in the world’s most glamorous cities. Remember the crew who rushed inside a shopping mall in an Audi? Those were the Panthers. 80,000,000â‚¬ theft in Paris? Yes, Panthers again. As legendary as they are in their own right, the Panthers are not the only ones. 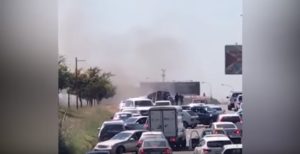 In Johannesburg, a group of thieves organized a burglary that had all blockbuster elements to it. Cars, spectacular explosions and fast getaway cars were all there. The burglars took advantage of Johannesburg’s rush hour to plant explosives on the back of an armored car. The guards were held at gunpoint and forced to exit the vehicle. Then the crew blew the armored doors off in a spectacular manner. With no guards and no doors to hold the money back, the crew unloaded the money and escaped.

Per police reports, a few civilians got hurt during the robbery and there was some damage to the surrounding cars. Namely, one motorist was hit by debris and car doors struck some of the passing cars. Upon successfully completing the robbery, the heist crew fled the scene in a Mercedes-Benz and a BMW. 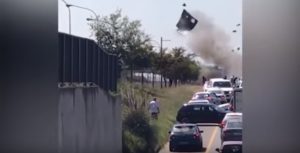 The police department issued the following statement: “The guards were forced out of the vehicle before the suspects blew their cash van up with explosives. The suspects took an undisclosed amount of money in cash boxes and one of the guard’s firearms. They fled from the scene in two vehicles.”

Luckily for the police, and for us too, there’s an eyewitness video of this spectacular heist. We can see the robbers putting explosives, and the rear door soon exploding. The debris flew into the air, falling onto the cars all around.

Even though the armored car was far in the background, we can clearly see men emptying the trunk, leaving the scene with bags full of money. So far, the police is searching for these armed robbers. If they manage to escape the hands of justice, we’ll remember them as one of the craziest, boldest robbers in recent history.

Robbing an armored car in the middle of nowhere is nothing close to doing such a thing in full blown rush hour. With a lot of things that could go wrong, these guys were really risking everything. But, so far, they did it. Better yet, they left the scene in big style, leaving the traffic jam followed by baffled looks of the eyewitnesses.