There are few legendary and recognizable motorsport events in the racing world than the Indy 500 race. Established in 1911 and held annually ever since, the Indy 500 is the biggest, most important racing event in North America and in the world. The list of superlatives could go on, but the truth is the Indy 500 is much more than just a race. It is an enormous automotive event and a celebration of car culture.

However, the history of the famous Brickyard wasn’t just the legendary racing cars and drivers. It was also created with a long list of fantastic pace cars. In fact, the Indy 500 was the first race to incorporate pace cars as an important part of the organization. In fact, the Indy 500 promoted many models through its special pace car status. Over the years, auto manufacturers have battled to promote their model as the pace cars.

Soon, this title became prestigious among Detroit’s finest brands. Presently, the record goes to General Motors, who had 52 cars as Indy pace cars. The event featured the Chevrolet Corvette 15 times, followed by the Camaro with nine times. So, read on to find out more on the 18 greatest, most memorable and iconic Indy 500 pace cars. From the first one to the last one, they have all made automotive and racing history. 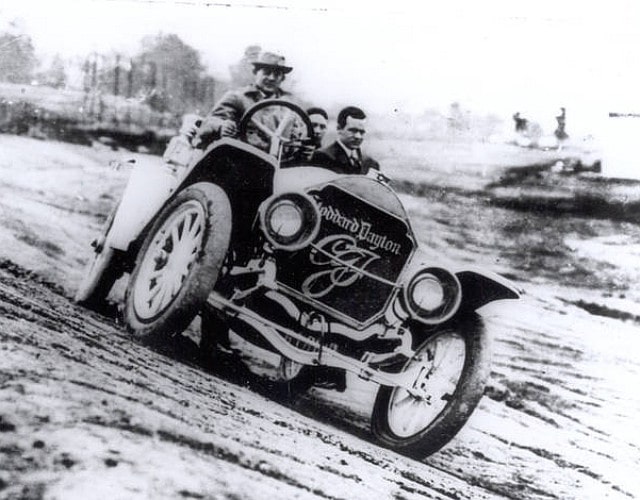 The first Indy 500 pace car was the Stoddard-Dayton from 1911. It was a nod to the neighboring company since they built those cars in Dayton, Ohio. Stoddard-Dayton was well-respected premium car brand in those days. But unfortunately, they discontinued it soon after and forgot all about it. 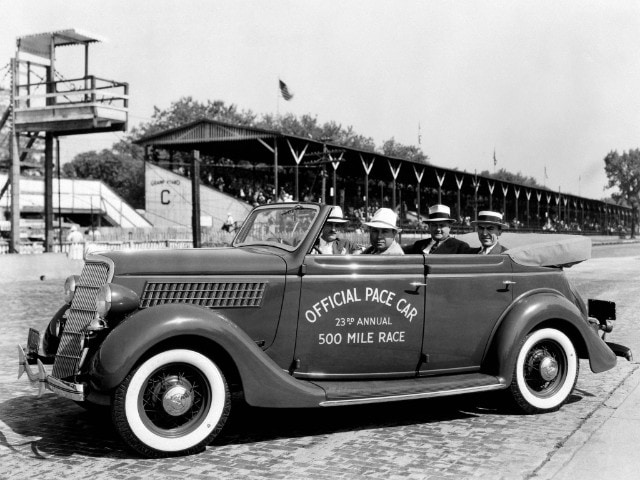 The 1932 Ford came with one of the best engines of the 20th century. It was Ford’s simple but effective 3.6-liter V8 engine with just 65 HP at the beginning of production. Even though other carmakers offered V8 engines for their models, Ford’s design proved to be the best and toughest.

Soon, it became the definitive engine for anybody looking for power in an affordable package. And that is exactly why the race officials chose the 1935 Ford V8 Convertible for pace car duty. Interestingly, that made it the first Ford they ever used as an Indy 500 pace car. 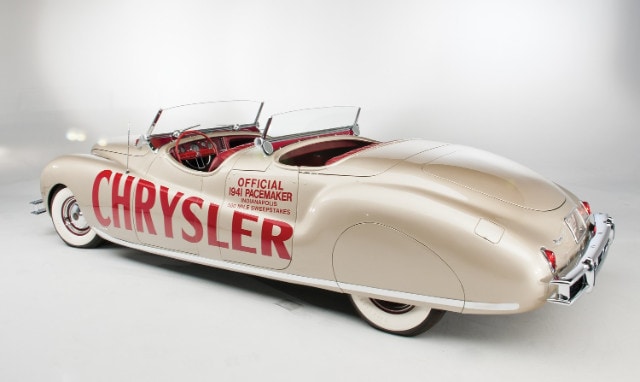 Chrysler was awarded the pace car title for the 1941 Indy 500 race. But since it wasn’t the first Mopar they chose for pace car duty, Chrysler wanted to make it special in the form of a one-off Newport Parade Phaeton Convertible. It had a 145 HP straight-six engine that provided enough power to lead the first race in front of a grid full of racing cars. 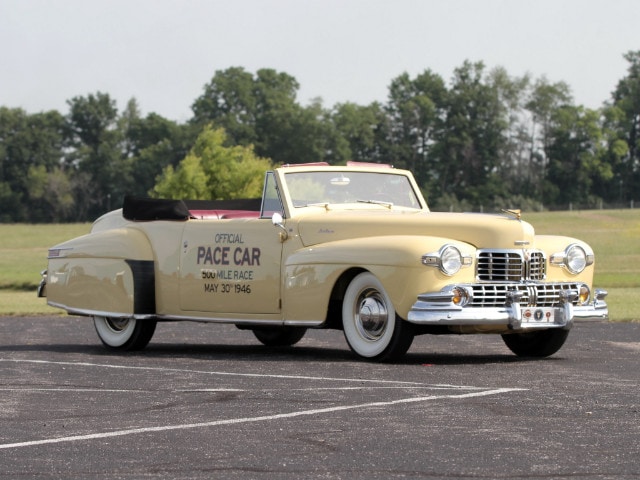 In 1954, they chose a Dodge to be a pace car and the company gladly accepted the honor. It’s Royal Convertible was one of the best-looking cars of that model year. Also, it featured a hot new Hemi engine with 150 HP on tap.

By the early â€˜50s, most car manufacturers had realized how important it was to be featured as pace cars for Indy 500. And Dodge used this opportunity to produce 701 replicas of its pace car, which they sold to motorsport enthusiasts all over the country. 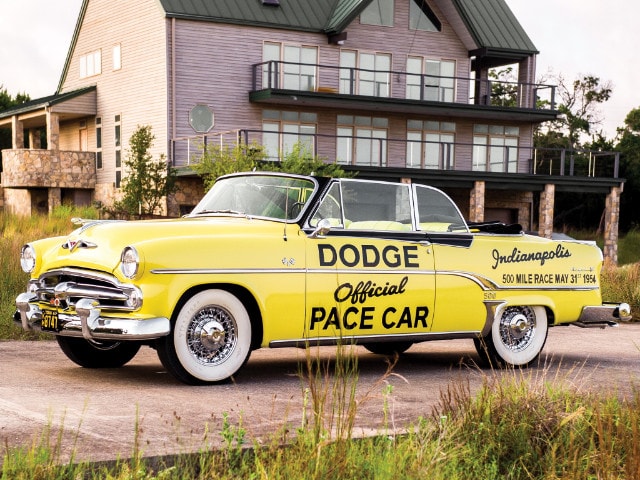 In 1954, Dodge was chosen to be pace car and company gladly accepted the honor. It’s Royal Convertible was one of the best-looking cars of that model year and it also featured hot new Hemi engine with 150 HP on tap. By the early `50s, manufacturers already realized how important it is to be featured as pace cars for Indy 500 so Dodge used this opportunity and produced 701 replicas of its pace car which were all sold to motorsport enthusiasts all over the country. 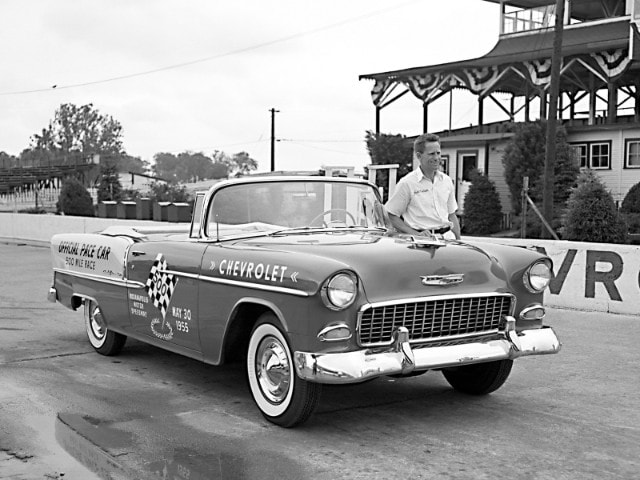 In 1955 Chevrolet presented the legendary “Tri-Five” series. Those cars got that nickname later since Chevy produced this body style for three years, from 1955 to 1957, so people started calling them “Tri-Five” and the name stuck. One of the biggest features of the iconic Tri-Five series is the availability of legendary Chevrolet Small Block V8 engine.

It brought power to the masses and gave those â€˜55 to â€˜57 Chevrolets some serious performance to go with their everlasting style and chrome fins. The combination of gorgeous looks and V8 performance was a sure winner for the Indy 500 officials. They chose the 1955 Bel Air for pace car duty. 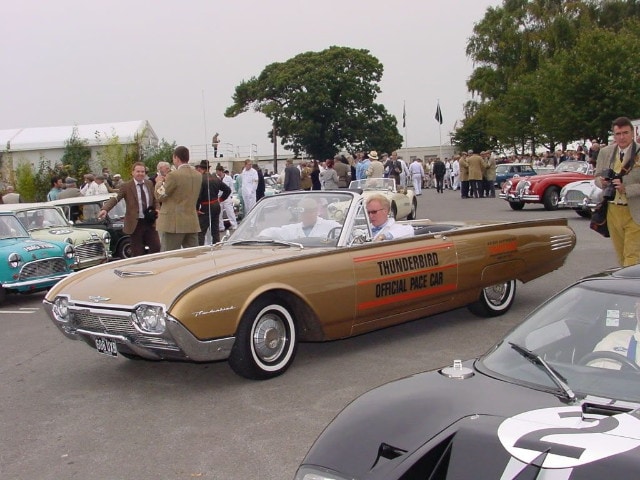 In 1961, Ford surprised the whole automotive world with its bold, rocket-shaped, Thunderbird. The car came with one of the most striking designs of the early â€˜60s. The new Thunderbird looked cool and featured the big, powerful 390 V8, which could propel the bullet-shaped roadster to high speeds.

And since that was exactly what the Indy 500 officials wanted, the 1961 Thunderbird was an easy choice. In fact, Ford made dozens of replica models that are now extremely rare. 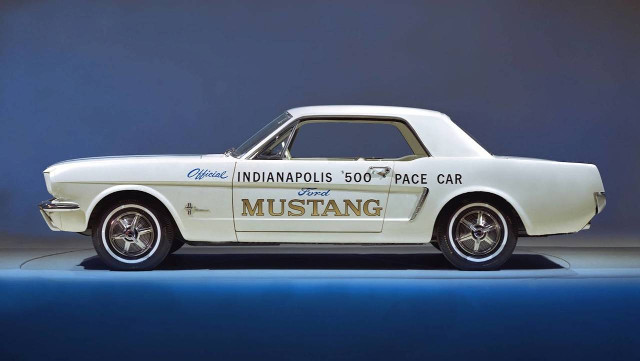 The first Mustang to pace the Indy 500 was the 1964 Â½ model. It was part of Ford’s massive marketing offensive to promote the new model. When the Indy 500 officials realized the new car was extremely popular and sought-after, they accepted it.

Interestingly, they used a fleet of white Mustangs as the official Indy 500 transport for the weekend. It undoubtedly helped the Mustang and it made the new Ford model even more popular with buyers. 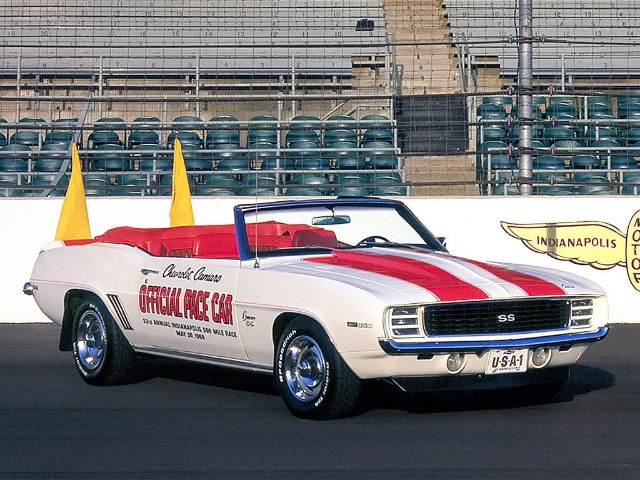 The 1969 Camaro SS Convertible was one of the best-looking pace cars ever to grace the Brickyard. Because of that, Chevrolet sold man replicas in white with an orange interior and lettering on the side. 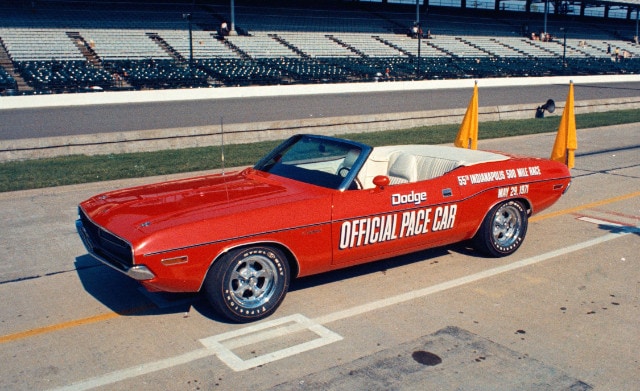 In the long, illustrious history of Indy 500 pace cars, most people consider the 1971 Dodge Challenger Convertible to be the most infamous model. In reality, the car was one of the best muscle cars in 1971 they dressed up in orange paint with a white interior. So, what was the problem with it?

The problem was the fact that after the inaugural lap, the orange Challenger Convertible crashed and injured several people. It didn’t stop the race, but it was an unfortunate incident that everybody wanted to forget. 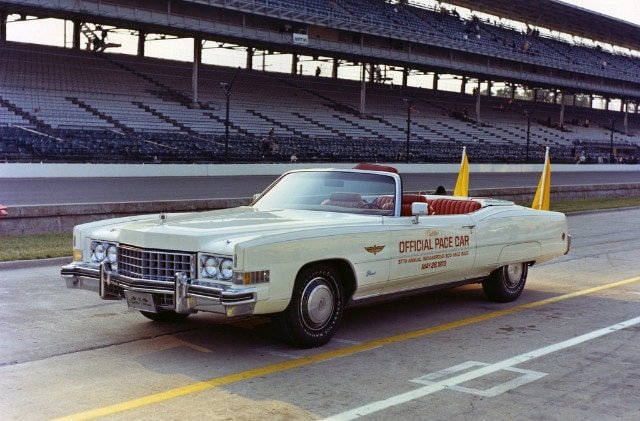 The decision to make the 1973 Eldorado Convertible a pace car was a controversial one. Before 1973, Cadillac paced the Indy 500 race only once, in 1931. But those Cadillac models were always considered big, heavy and not particularly fast cars. Since race cars got faster and faster, the pace car needed to be fast enough to pace the race.

Cadillac did have the biggest engine in the industry in the form of the 500 V8, but it also had an enormous weight and a not so sharp suspension. However, it managed to pace the 1973 Indy 500 just fine to enter the history books. 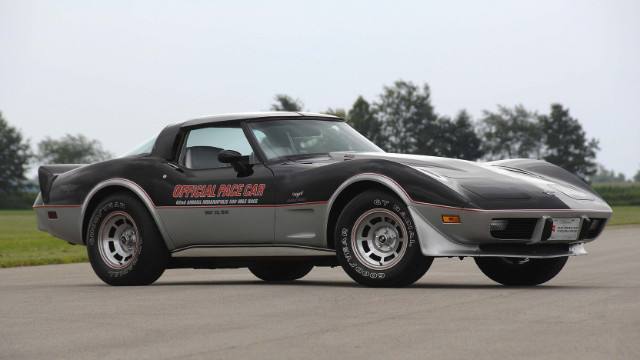 In 1978, they chose the Corvette C3 to pace the race. And once again, Chevrolet provided the car dressed up in a memorable color scheme with cool graphics. But the 1978 Corvette wasn’t particularly hot since it was 10-year old design without any real power or performance. 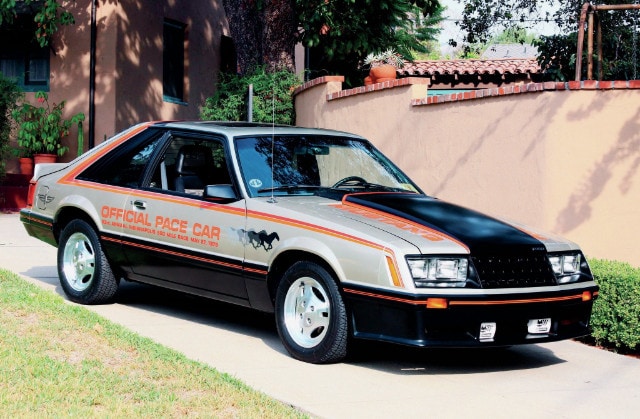 The biggest news for 1979 was the introduction of the new, advanced third generation Ford Mustang known as the Fox-body Mustang. The new car was far better looking than the previous model. Also, it featured innovative technology, as well.

The Indy 500 officials chose the new Mustang, so Ford delivered specially prepared cars they powered with Roush-built 5.0 V8 engines for race duty. Also, Ford built and sold over 10,000 race car replicas with a distinctive color scheme and the choice of V8 or 2.3-liter four-cylinder turbo engine. 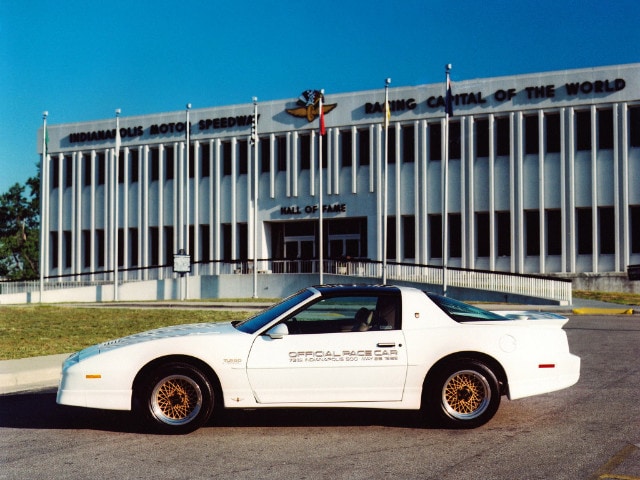 In 1989, Pontiac was celebrating the 20th anniversary of its favorite muscle car, the Trans Am. And what was a better way to do that than to introduce a limited run of 1,500 cars to commemorate the occasion? But Pontiac realized their anniversary editions had to have a twist and not to be just another decal and paint job.

So, Pontiac decided to install a Buick 3.8-liter turbo V6 from the GNX to create the fastest Trans Am of the decade. The Indy 500 officials recognized how important and interesting this car was, so they awarded it with pace car duty for the 1989 Indy 500 race. 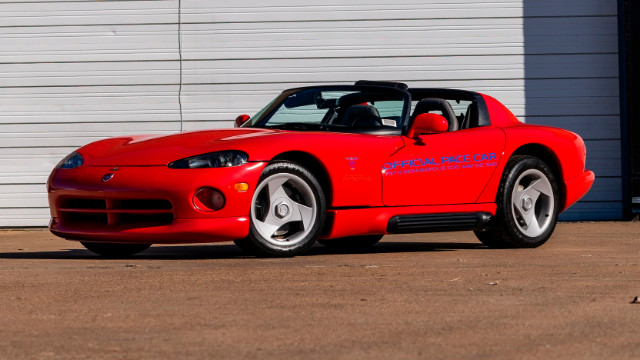 The development of all-new Dodge Viper was slow since the car was totally different from anything Chrysler offered up to that point. But when the officials of the Indy 500 declared it would be the 1991 pace car. So, Chrysler delivered finished pre-production cars for pace duty.

Under the hood was an 8.0-liter fully aluminum V10 with 400 HP and 465 lb-ft of torque, which was unheard of at the time. It secured the Viper’s place as one of the most powerful new models on the market. With the legendary Carroll Shelby behind the wheel, the Viper paced the Indy without breaking a sweat. 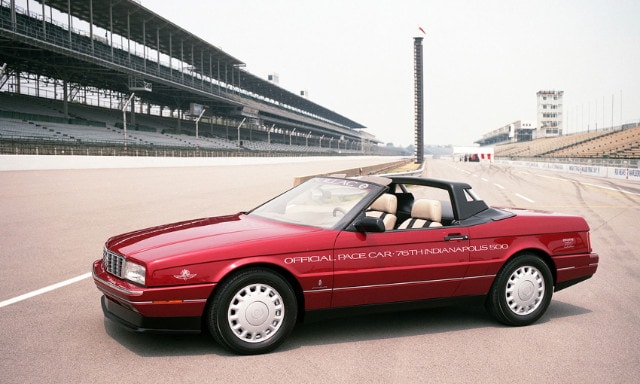 The Cadillac Allante was the last Caddy to pace the Indy 500. And it was, by all means, an interesting beast. They designed the car in Italy, shipping the bodies to America for final assembly. It featured a new generation of 32 valve Northstar engines and elegant styling.

But best of all, the Allante offered more than an exciting performance thanks to its 290 HP rating. It paced the 1992 edition of Indy 500 dressed in a nice dark red paint with lettering on the side and a special roof bar for protection. 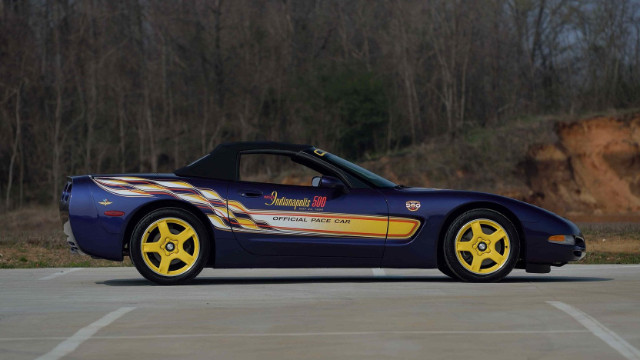 Chevrolet presented the C5 generation as a 1997 model. However, since was already decided that Oldsmobile Aurora should pace the 1997 Indy 500, Chevrolet had to wait a year for the Corvette to grace the Brickyard.

Of course, they dressed the 1998 Corvette Indy Pace car up for the occasion with special paint and yellow wheels. Better yet, the Chevrolet dealers gladly sold numerous pace car replicas that year. 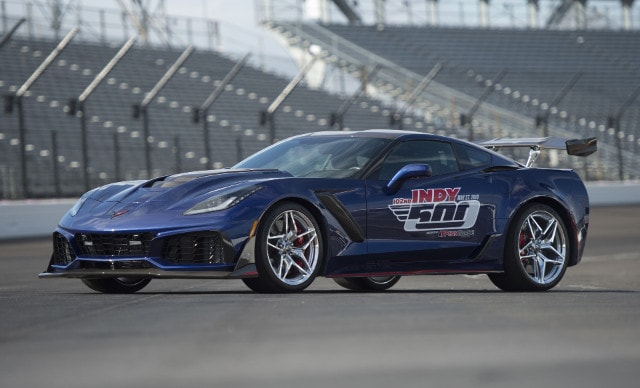 In the last several years, GM has covered Indy 500 pace car duty with numerous Camaros and Corvettes. They were all dressed up for the race and available to customers as limited run packages. However, in 2018, the most powerful Indy 500 pace car was the new Corvette ZR1.

The 6.2-liter heavily supercharged LT4 engine pumps out 755 HP and 527 lb-ft of torque. So, it is safe to say that this time, the pace car is almost as powerful as the race cars behind it.