Police pulled two classic cars from a lake. Turns out they’d been there 40 years and held a harrowing secret…

While training with new sonar equipment in Foss Lake, Oklahoma, police accidentally stumbled upon two classic cars. Having clearly been submerged for a very long time, the vehicles were barely recognizable.

Little did the officers know upon first glance, they’d helped solve two cold cases from nearly 40 years ago. The two cars, from separate missing persons cases, were a 1952 Chevrolet and a 1969 Camaro.

Although they were from different cases, the cars were eerily parked side-by-side on the bottom of the lake. Once the doors were opened, police found skeletons of six previously missing people.

A spokesperson for the Oklahoma state patrol said:

‘The divers then went back in the water and searched around and found a skull. We thought it was just going to be stolen vehicles and that’s not what it turned out to be, obviously.’

The sad stories of all the cases are below; 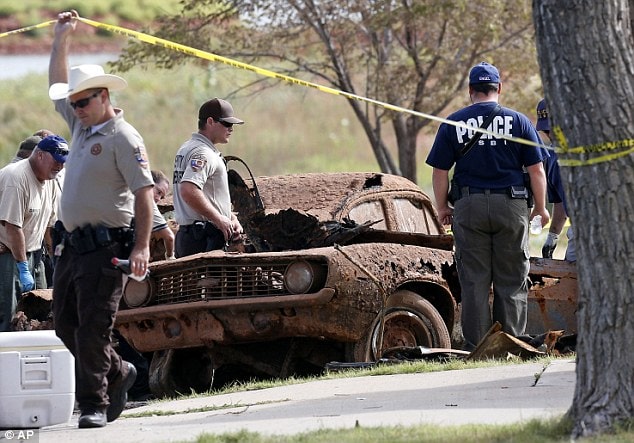 Sat in the 1969 Camaro were teenage friends Jimmy Williams, Leah Gail Johnson and Thomas Michael Rios. They’d disappeared while going on a shooting trip way back in 1970. Found with their rifles and beer bottles by their side 40 years later, the case was solved with the use of DNA testing.

Although most of their families had long passed by this point in 2013, the remaining members of the six families have limited closure.

Last year, the family of Thomas Rios said his mother never gave up hope that her son would be found, after he made an off-the-cuff comment once about how easy it would be to disappear.

Pearl Guzman had insisted on staying in the town where Thomas grew up so that he could find them again, and regularly called the police for updates until she died, heartbroken, in 2010.

‘Mom didn’t ever want to leave Sayre because she told us if Thomas came back, he’d be looking for us,’ Lucia VanZandt, his sister, told the Associated Press. Since we didn’t have a body to lay to rest, it was just like he vanished.’