H. R. Giger’s Alien is one of the most iconic movie monsters of all times. Slender, skeletal and menacing, this creature has been giving us the chills since 1979. This killing machine from outer space was a product of one brilliant dark mind, and it instantly became a pop culture icon for its unforgettable looks. As such, it became an inspiration for many other artists obsessed with horror, space and everything that connects those two.

One of those people is Roongrojna Sangwongprisarn, a self-taught sculptor from Thailand. He is known for making intricate sculptures from scratch metal. With unmatched attention to details, his creations are truly unique and remarkable. One of his most impressive ones is a true mobile work of art. By looking up to the great H. R. Giger, Sangwongprisarn created an Alien-themed motorbike. We’ve seen lots of custom bikes, but not a lot of them left us in awe like this one. 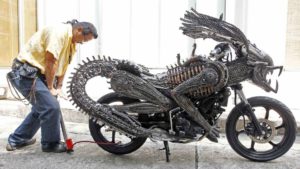 Alien is a sci-fi icon

Roongrojna Sangwongprisarn is already a pretty well-known artist in Thailand, with four of his Ko Art shops selling his work. Also, his sci-fi sculptures have found their way to other corners of the Earth. However, none of the previous sculptures can really compare to his magnum opus, a fully functioning Alien motorbike.

Using a naked motorcycle frame, Roongrojna Sangwongprisarn built this moving sculpture from various discarded pieces of metal. When you look very, very closely, you can recognize parts from discarded cars, appliances and similar junk that Sangwongprisarn turned into treasure. 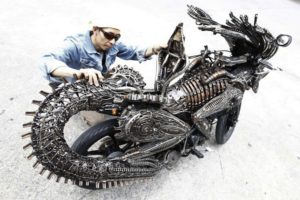 This Alien bike is where creepy meets impressive

The metal Alien bodywork is a combination of Sangwongprisarn’s and Giger’s imagination. All the features Alien is known for are there. Elongated eyeless head with two jaws, spine with protruding vertebrae and a long skeletal tail.

The head, however, comes from Thailand-based artist’s mind, and it’s much wilder than the original Giger’s work. We could even say that it has a little bit of Predator in itself, but we’ll leave that for you to judge. The only thing that’s left without any changes are the wheels, but they have been painted in complementary black.

We don’t have any idea which motorcycle this is, but does it really matter? All we really know is that it’s not the safest custom bike out there. But, we also know that this Alien motorcycle is by far the most impressive one. Such attention to detail truly makes you wonder how much talent and dedication does it take to transform a heap of scrap metal into something that intricate and beautiful.

A lot for sure, we say, since this level of detail and precision is hardly seen anywhere except in Hollywood movies. Builds like these usually take months and a team of people to complete, which makes this Alien bike even more impressive. One brilliant mind, two hands and a lot of motivation can truly do wonders when properly combined. This bike definitely is something out of the ordinary, So, Roongrojna Sangwongprisarn, we salute you for creating this wonder and deciding to share it with the world!

50 Worst Cars To Come Out Of The New Millennium
POPULARCameron EittreimMay 25, 2022 These days the automotive market is always evolving as new and improved models hit the...
- Advertisement -
Advertisement
Please wait 5 sec.