Like the 1961 Lincoln Continental, the 1962 to 1964 Impala had restrained, elegant styling. Also, it came with straight lines, the signature six tail lights in the back and four headlights up front. Chevrolet wanted to dominate the extremely lucrative full-size sedan market, so they equipped the Impala with everything they had.

The new model featured five body styles and six engines, including six and eight-cylinder engines. Also, buyers had three transmission choices and a long list of optional equipment. However, the most influential and innovative version was the Impala SS. 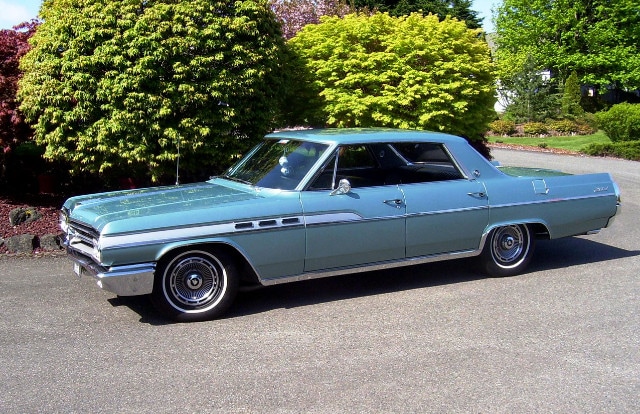 The Buick Wildcat is one of the most interesting, but almost forgotten models that were popular back in the day. Buick unveiled it in 1963 and the Wildcat was something between a personal luxury model and a muscle car. It featured restrained, elegant styling like the rest of the Buick lineup. However, it also had powerful engines, a sporty trim and an impressive performance.

One of the most characteristic American sedans is the legendary Checker Marathon, better known as the New York taxi. They presented the Marathon in 1960 and sold it through 1982. Available with a straight six or V8 engine from Chevrolet, they designed and built the Marathon to be a dependable, tough machine. 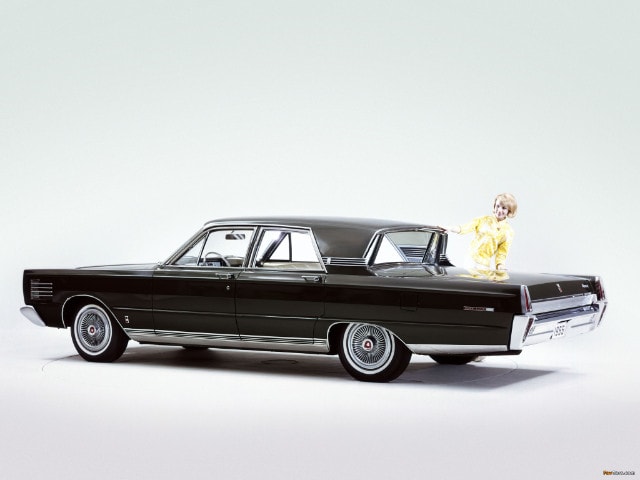 During the ’60s, this brand offered class and style at reasonable prices. In fact, Mercury was a formidable opponent to Oldsmobile, Buick and Chrysler. Learning from the Continental, Mercury decided to offer something new to their customers. Hoping to raise their sales numbers, in 1963, they introduced they innovative Breezeway option at their top model. The best features of the Breezeway was its reverse C pillar design, concave profile and tilted rear glass that was retractable. 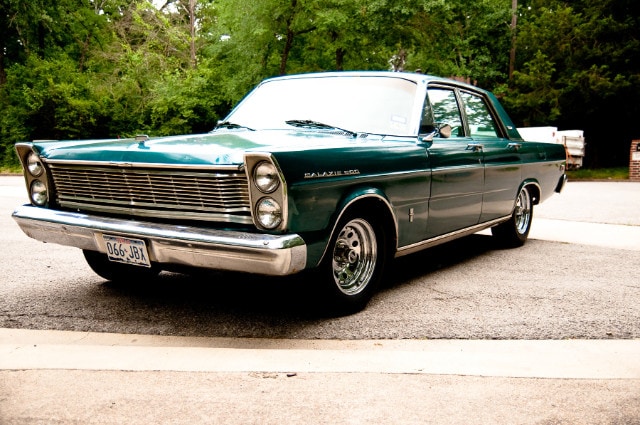 Similar to Chevrolet Impala, the Ford Galaxie was the Blue Oval’s most important series. It came with high production numbers, lots of versions and a wide appeal. However, in 1964, Ford was at the back of the design trends, still featuring heavily chromed models with late ’50s styling cues. So, for the 1965 model year, they introduced their all-new Galaxie with stacked headlights and fresh sheet metal. And lastly, they offered more Galaxie versions and options than ever. 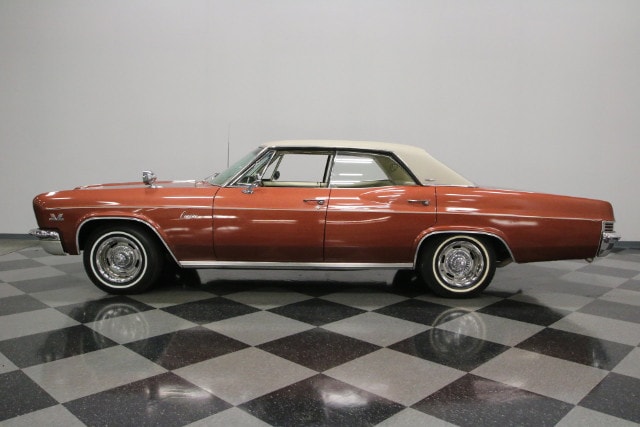 When Chevrolet revealed the Caprice in late 1965 as a 1966 car, nobody expected it would be so successful. In fact, it went on to span five generations, selling millions of cars. They designed the Caprice as a luxury version of the Impala with more powerful engines, luxury and a few distinctive external differences. For example, in the 1966 model, the base engine was a V8, not a straight six. Also, all models had a vinyl roof as standard. And for performance lovers, Chevrolet offered the 396 and 400 V8 engines in the Caprice four-door hardtop. 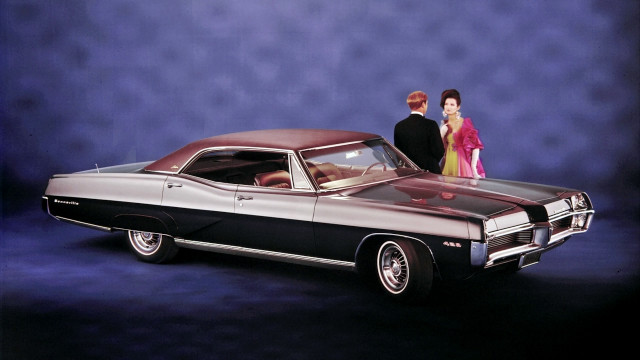 Pontiac restyled the Bonneville for 1965. But in 1967, its design matured and evolved into an elegant, low and sleek form perfect for this performance sedan. The Bonneville came as a hardtop with the Pontiac signature wide-track design, split grille and nine bolt wheels.

Also, customers could get a lot of optional equipment and powerful engines. The 389 V8 with 325 HP was standard. However, you could also get the mighty 421 V8 with the famed Tri-Power option that delivered 360 HP. 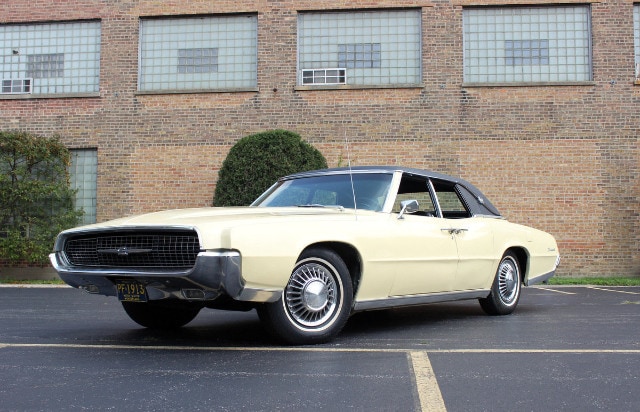 You’re probably wondering why the Thunderbird is on a list of the best American four-door cars of all time. After all, the T-Bird is a two-door coupe. However, for a few years starting in 1967, Ford offered the Thunderbird as a four-door sedan with Lincoln-style suicide rear doors. Under the hood, the standard engine was the 390 V8, but buyers could also opt for the mighty 428 V8.

The Chrysler luxury division Imperial offered a quality alternative to the Cadillac or Lincoln models. With powerful engines, plush interiors and upscale styling, Imperials were a good choice in an exclusive sedan. However, 1968 was the last year this brand featured a significantly different design than the rest of the Chrysler lineup with its unique interior styling and appointments. 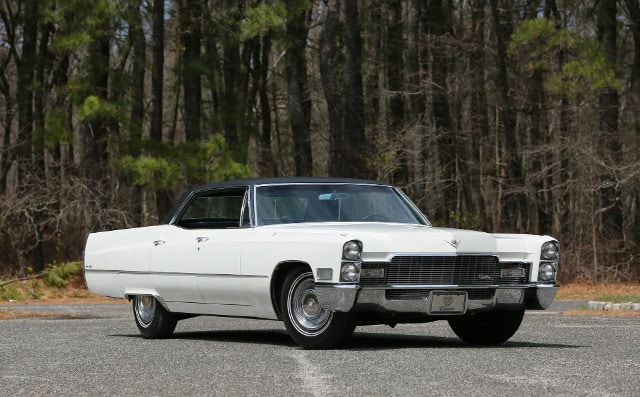 For the 1968 model year, Cadillac introduced the new 472 V8. It was the final piece of the puzzle, making the De Ville the best luxury sedan of the late ’60s. It came with 375 HP under the hood, and an unmatched style and presence. The design, which Cadillac first introduced in 1965 included stacked headlights and a big grille. Best yet, Cadillac steadily improved the De Ville with the new 472 V8, so in 1967, it was the perfect luxury car. 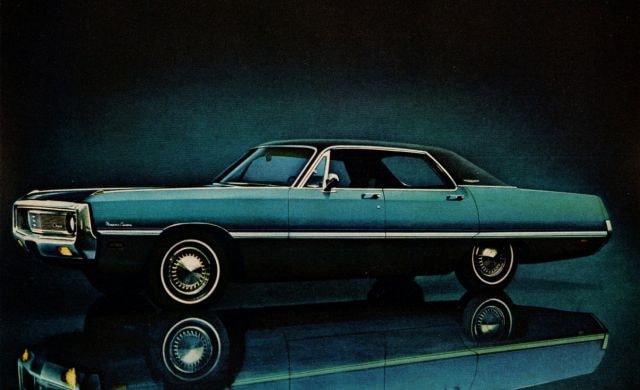 Chrysler ended the ’60s on a high note with their new and influential “Fuselage” styling. The rounded sides and lower, sleeker profile looked modern in comparison with other models. In fact, they used the “Fuselage” styling throughout the Chrysler range. Soon, all the new full-size Mopars, including Dodge, Plymouth and Imperial had this look. 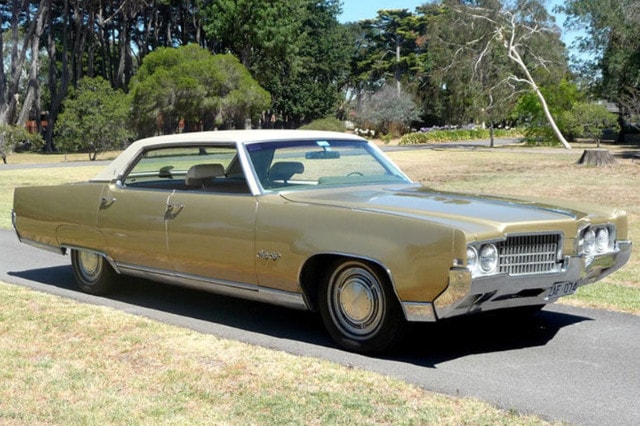 Most people tend to forget how good and respected the Oldsmobile models were. This company, which is now unfortunately long gone, was one of General Motors’ most valuable brands. And the Oldsmobile 98 was always the best Olds available. This was because it had the power, style and luxury to rival even the Cadillacs. 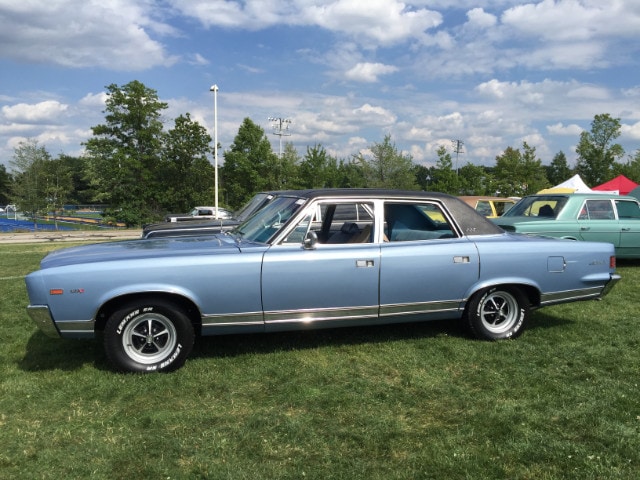 The new Ambassador was one of AMC’s best attempts to attract their customer’s attention in 1969. The improved styling, comfort and air condition as standard were impressive features by the standards of the day. The engine lineup started with the modest 283 straight six unit. However, it went all the way up to the powerful 401 V8. 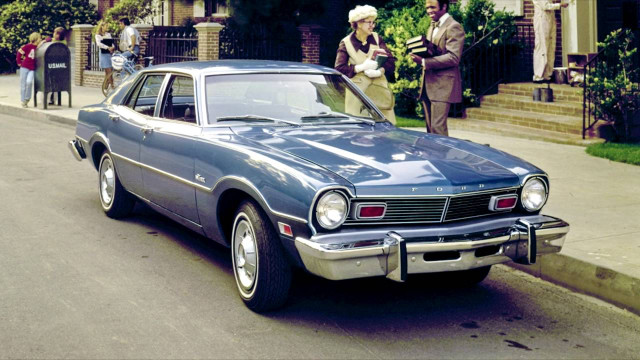 The early ’70s pushed those compact cars into the spotlight, so many American brands presented scaled down models. But one of the best and most influential was the Ford Maverick. Ford built it on the Pinto platform and the Maverick had cool styling. Also, it came with lots of options and dependable mechanics. And all that translated to fantastic sales success, spawning many competitors. 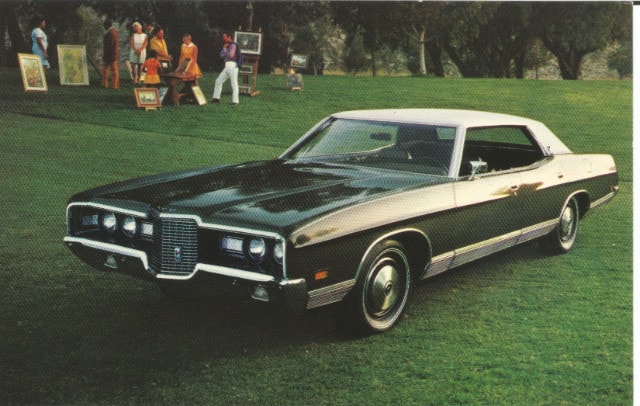 Although it started in the ’60s, the early ’70s marked the rise of Ford’s LTD model. The LTD was a typical formal sedan of the era with dependable mechanics and its signature vertical grille. Also, customers got lots of options at an affordable price. Ford sold the LTD in the millions. Interestingly, you may recognize this car from numerous old cop movies and TV series. 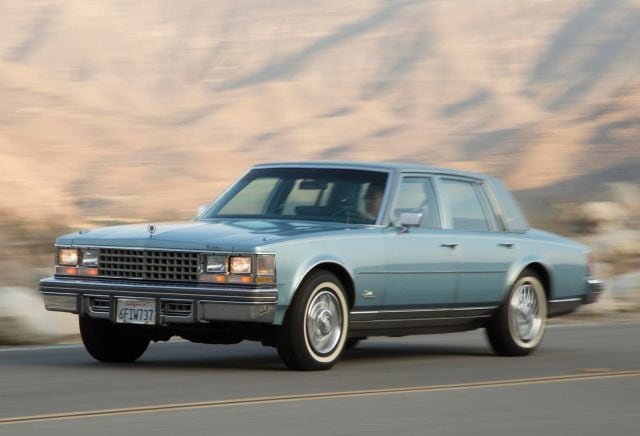 The 1975 Seville was shocking to Cadillac purists as the first downsized Caddy and an affordable luxury car. However, it was an extremely smart move by the company because it was one of the best U.S. sedans of the late ’70s. The 1975 Seville was the best car for the time, so sales went beyond their expectations. The Seville was elegant, perfectly sized, and reasonably powerful. And best of all, it came with a long list of options and trim choices. 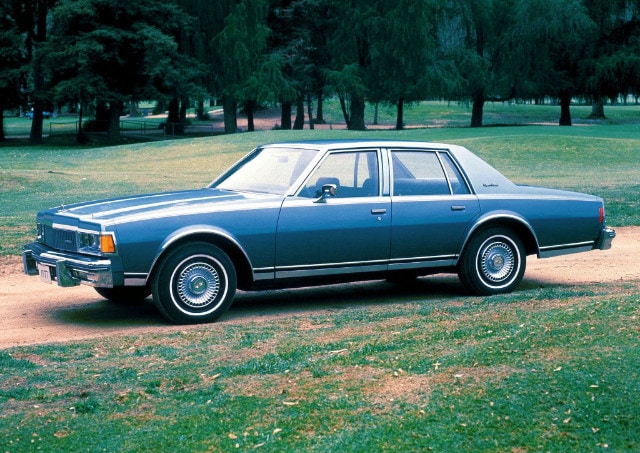 Following the modernization throughout the range, in 1977, Chevrolet introduced the Caprice Classic, a full-size sedan. The combination of elegant looks, tough mechanics and all-around usability made this model one of the most popular, longest-lasting models on the market. With minimal changes, Chevy sold this sedan for 13 years, all the way to 1990. Also, many law enforcement agencies and the government used the Caprice Classic. 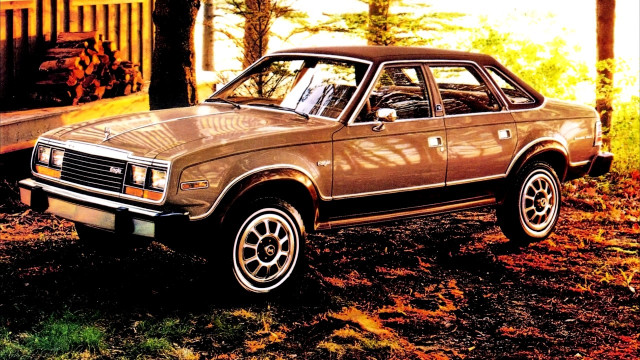 AMC conceived the Eagle in the late ’70s. It was their answer to the rising popularity of AWD vehicles and SUVs. To create it, AMC combined their compact sedan and wagon lineup with the tough and proven Jeep AWD system. The result was a surprisingly capable vehicle with the comfort and luxury of a sedan. Also, it came in compact dimensions, relatively low weights and extremely good off-road characteristics.

The Ford Panther platform is one of the longest-serving platforms in the car industry. First presented in 1978, it served until 2011, underpinning models like the Ford Crown Victoria, Mercury Grand Marquis and Lincoln Town Car. This chassis was sturdy and durable in extreme conditions, so as it was the basis for many police cars and taxis. Even today, seven years after they discontinued it, millions of Panther-based models are still on the roads. 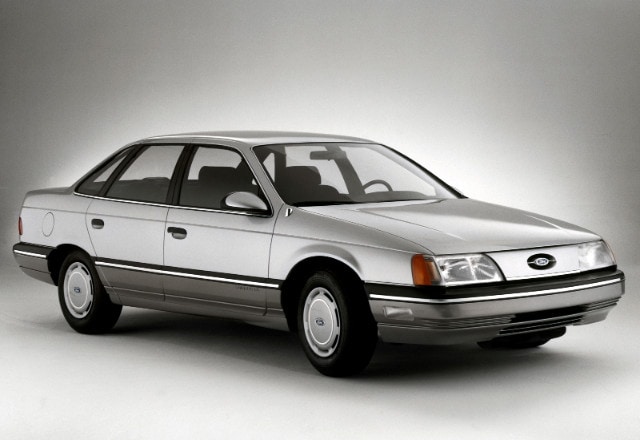 Back in the mid-80s, Ford caused a revolution with the introduction of the Taurus. This was the first truly modern American sedan that ditched the heavy ladder-type chassis and big engines. In fact, it went in a different direction with a sleek, aerodynamic body, new technology and front wheel drive. Ford sold the Taurus in high volumes, even featuring a performance SHO version. 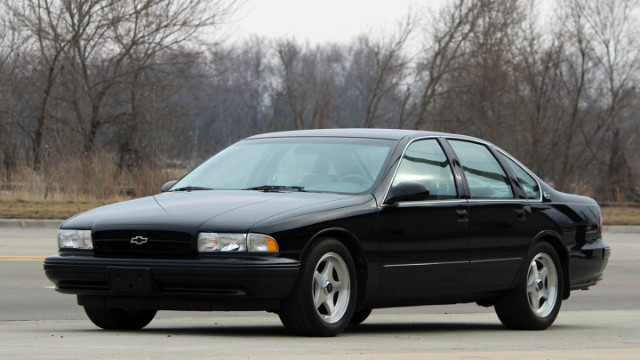 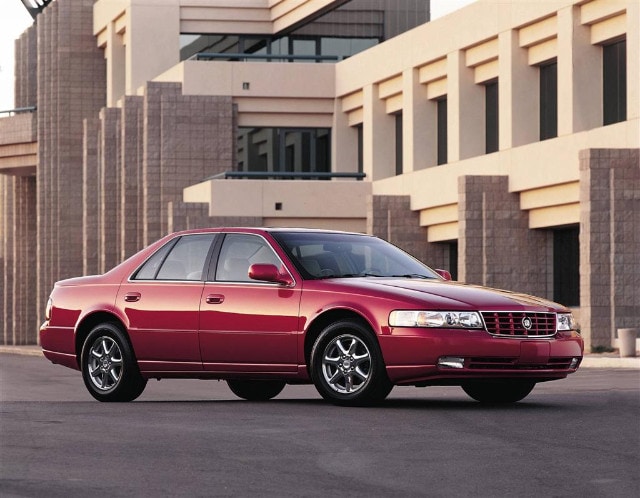 During the ’90s, the Seville had a major redesign including a new platform, Northstar V8 engines and a sleek, cool-looking design. It had 300 HP coming from a 4.6-liter V8 engine with a magnetic ride. In addition, it came with a plush interior and numerous other features. Also, it was a true competitor to the likes of Mercedes and BMW. 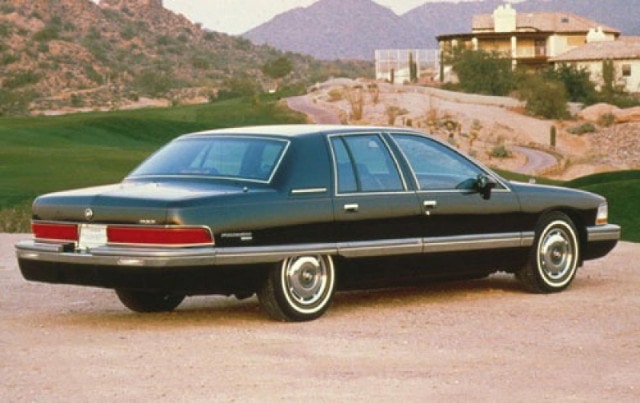 The legendary Roadmaster name returned to the Buick lineup in 1991 after a 33-year hiatus, gracing the freshly-styled luxurious sedan and station wagon models. The car was basically the same as other offerings from General Motors in the same class. However, the Roadmaster had more luxury options and one interesting engine that turned this comfy cruiser into a muscle car. 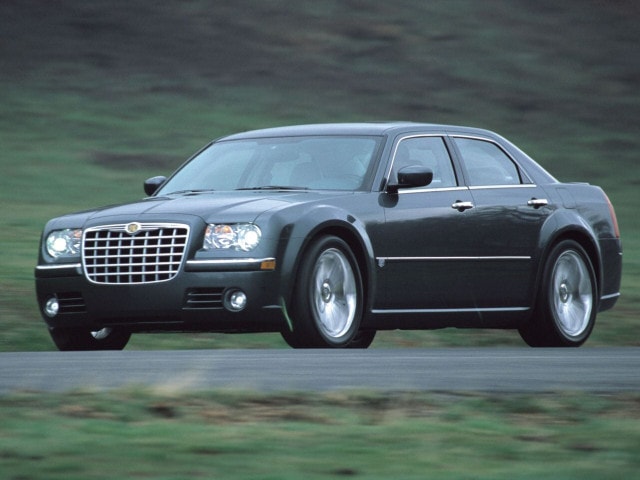 The early 2000s saw the return of the classic Chrysler sedan. It was the perfect homage to one of the quintessential American four-door cars – the 300 C. Chrysler built it on a modern platform with a range of powerful engines, including the 5.7 Hemi. The 300 C was big, strong, well-equipped and well-built. Also, it sold well and is still the car if you are looking for a classic style and feel. 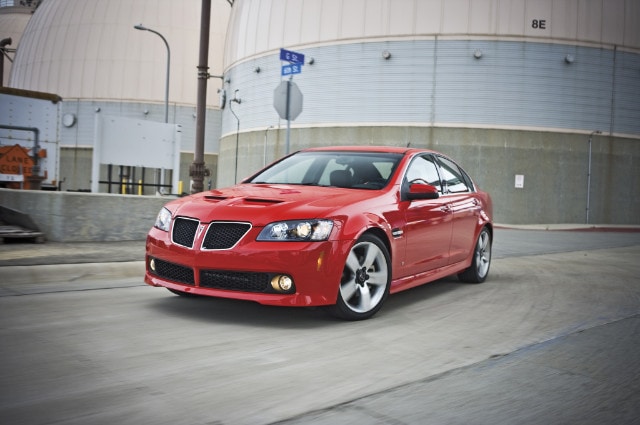 Pontiac thought that a rear-wheel-drive sedan would help them fight their European competitors. With a Pontiac redesign and small-block V8 engine, the G8 was an effective performance sedan, too. The base engine was a solid 3.5-liter V6 producing 256 HP. But the real deal was the G8 GXP with a 6.2-liter V8 delivering 415 HP. Better yet, the G8 came with high levels of standard equipment, as well as a long list of optional extras. 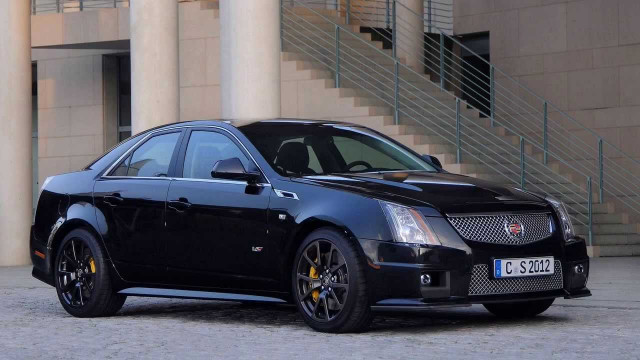 The CTS is a mid-sized Cadillac sedan with the performance V option. However, the most successful was the second generation, which they produced between 2008 and 2014. Under the hood was a supercharged 6.2-liter V8 with 556 HP, making the CTS-V the most powerful performance sedan on the market. The suspension and drivetrain were so advanced, the CTS-V was the full package, making it one of the best cars available at that time. 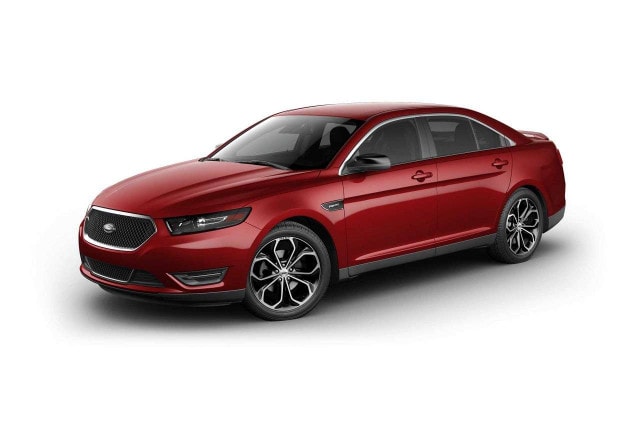 With its powerful EcoBoost V6 engine displacing 3.5-liters and delivering 355 HP to all four wheels, the new Taurus SHO can outhandle and outperform many current sports cars. The modern Taurus is the perfect evolution of an American sedan. Although it retains its classic proportion, design and feel, the SHO incorporates modern technology and performance. 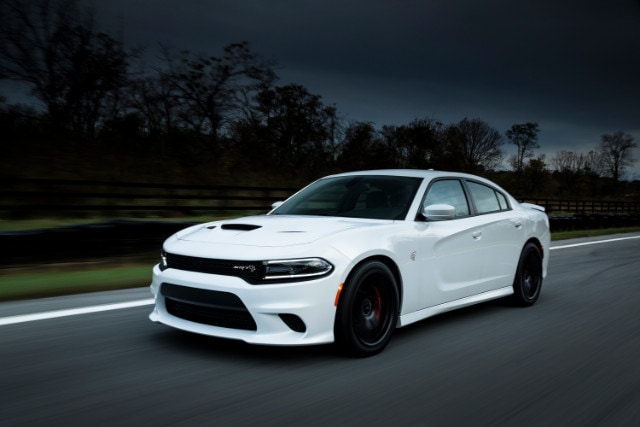 Using the old Chrysler 300 C architecture, 707 HP Hemi engine and modern technology Dodge created the ultimate American car. The Charger Hellcat is a muscle car, classic rear-wheel-drive sedan and an exotic car, all at the same time. However, the best part is that it is capable of beating any European exotic yet its still able to take your kids to school.

These are the 50 most iconic American four-door cars of all time. Have you chosen your favorite? While some are plentiful, others come in limited numbers. Hopefully, you’ll be able to find it in good condition at a reasonable price. Even so, all of these models have made their mark in automotive history.

Real Drivers Who Were Pulled Over For Completely Idiotic Reasons
POPULARCameron EittreimJune 30, 2022 1: Rookie Error One of the worst things a driver can do is forget to...

Sad Photos Of Real Cars That Were Ruined By Irresponsible Owners
POPULARCameron EittreimMay 27, 2022 1: Horse and Buggy There is no end to what people will do to get...

50 Worst Cars To Come Out Of The New Millennium
POPULARCameron EittreimMay 25, 2022 1: Alfa Romeo Giulia The Alfa Romeo brand returning to the US market was big...
- Advertisement -
Advertisement
Please wait 5 sec.