20 Forgotten SUV Models People Will Rarely See on the Road 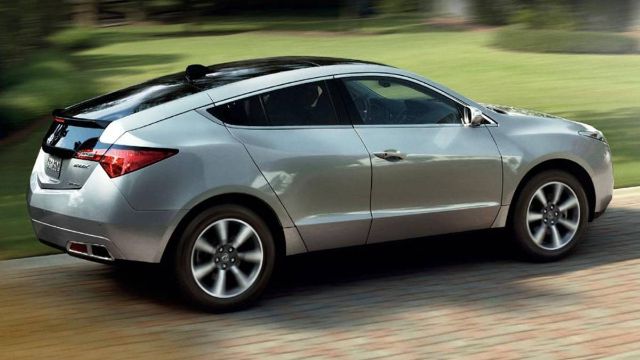 Honda’s luxury division, Acura, is famous for elegant cars, powerful engines and quality products. But, people also know them for a strange and ugly model they called the ZDX. Offered for just three years, the Acura ZDX was an attempt to present something between a sedan, a crossover and an SUV.

However, it ended up being neither of three. Despite having a good technical layout, decent power and interior features, buyers simply didn’t like the ZDX. So, Acura only managed to sell 7,200 of them. 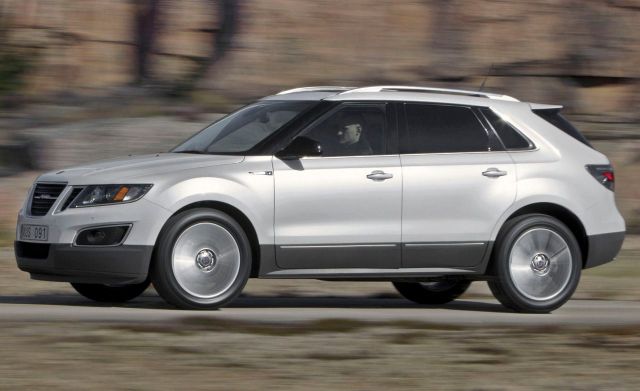 The Saab 9-4X was a compact luxury crossover SUV Saab built on the Cadillac SRX base. They intended it to be a competitor in the premium car field. Saab presented it in 2011 just before GM closed the company down. The short production run means they built only around 800 9-4Xs.

And that is what makes this Saab one of the rarest models Saab ever made. So, it’s an extremely rare sight on the roads. In fact, most people don’t even know the car existed. 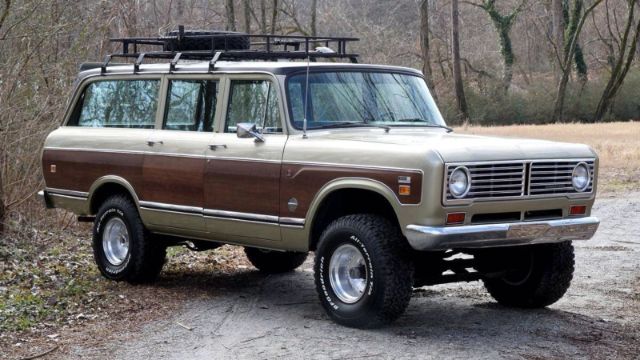 Not as popular as the Chevrolet Suburban but better, the International Travelall is a spacious and durable vehicle. Some say International Harvester built the Travelall with industrial strength materials they used for trucks. So, that was the secret of its durability. International presented the first generation in 1953, and the fourth and the last one in 1969.

Customers could get the Travelall with a choice of a six or eight-cylinder engine. AMC provided the smaller V6 engine, and International Harvester designed and produced the V8. Unfortunately, they discontinued the Travelall in 1975. And that was a shame since the company achieved a high owner loyalty and satisfaction level due to the quality and power of its vehicles. 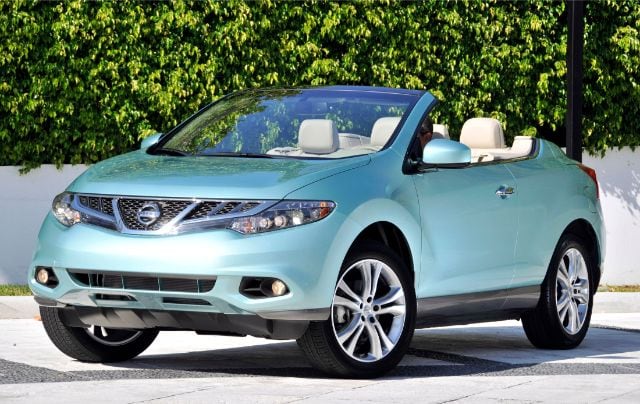 If you think the automotive industry has invented all the car classes it possibly could, think again. There is always room for more, although possibly useless concepts. And one of those was the Nissan Murano CrossCabriolet. If you are not familiar with this car, that is because they offered it for sale from 2011 to 2014. But even so, they produced it in small numbers.

Nissan realized SUVs were getting more luxurious and people were seeking a more personalized product. So, they decided to go a step further and present a convertible SUV. Nissan wanted it to have all the advantages of an SUV in terms of ride height, comfort and usability. Yet, it also had to have the luxury and open-air feel of a convertible. But despite the almost bespoke nature of this car and dependable Nissan technology, the CrossCabriolet flopped. 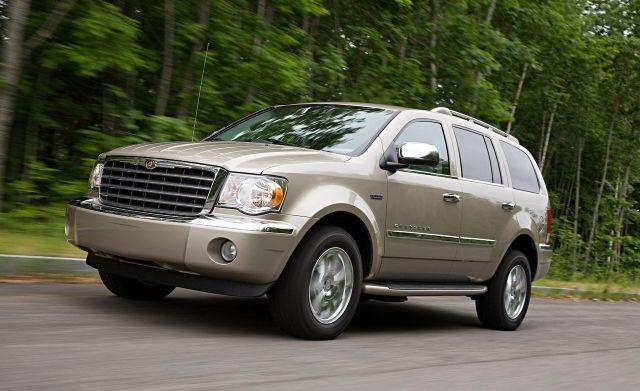 The Chrysler Aspen and Dodge Durango were practically identical models, but with an exterior difference. However, while the Durango was quite popular, they discontinued the Aspen after just three years on the market. The problem was that they aimed the Aspen towards the higher segment of the market.

And that meant they had competitors, like Cadillac and Lincoln. Unfortunately, Chrysler didn’t have what it takes to attract those customers, so it sold poorly. Today, those big SUVs with eight seats are perfect luxury models. 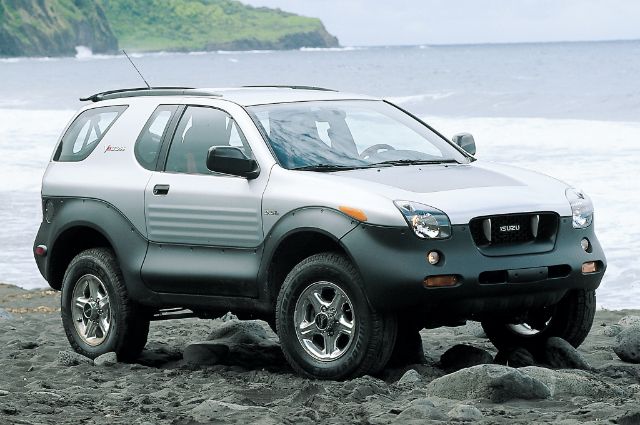 Behind this strange name was an even stranger vehicle they sold in a three-door specification with a 3.5-liter V6 engine and automatic transmission. Isuzu designed the VehiCross to be a modern, even futuristic off-roader. So, they gave it the best all-terrain technology and components.

But, in 1997 when they presented the VehiCross, the market didn’t react the way it should. The VehiCross was strange looking and some even said it was ugly. But it came in crossover form, making it a capable and quality-built off-roader. And that is why U.S. sales were sluggish, so in 2001, they discontinued the VehiCross. 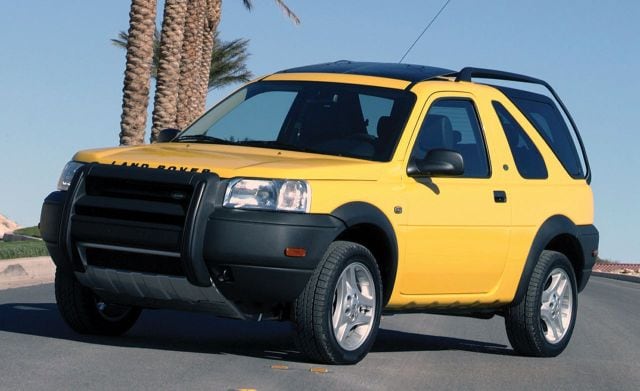 Popular and common in Europe and America, the Land Rover Freelander was kind of a failure. They offered it in 2003 with modern styling and features as well as dependable off-road mechanics. So, what was wrong with the Freelander SE3?

First, it was expensive, underpowered and offered limited space. Second, it didn’t perform as well as the Jeep Wrangler, for example. And that is what sealed its fate. So, in 2005, Land Rover discontinued the Freelander, at least for the U.S. market. 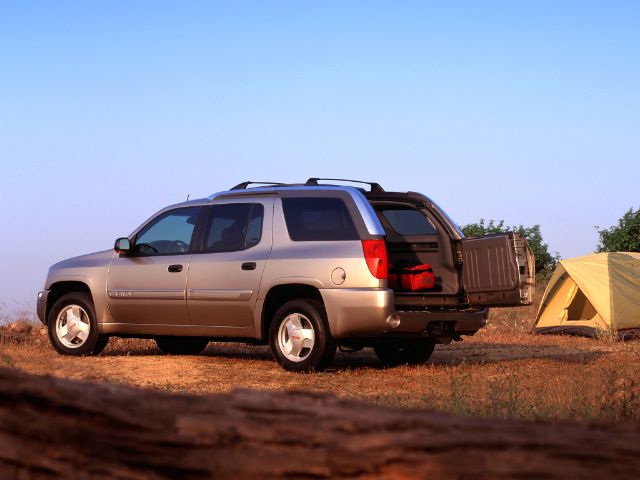 The GMC Envoy is a popular model. Al through the years, it has sold well, even on some export markets. However, the XUV version GMC introduced in 2004 was a different case. Somebody at GM thought it would be a great idea to combine an SUV with a pickup truck.

So, soon they presented the XUV with a removable roof panel and an opening tailgate. The XUV was more practical, obviously, but it was more expensive and heavier. So, the buyers simply didn’t get the idea. Sadly, GMC discontinued the Envoy XUV just after a year in production. 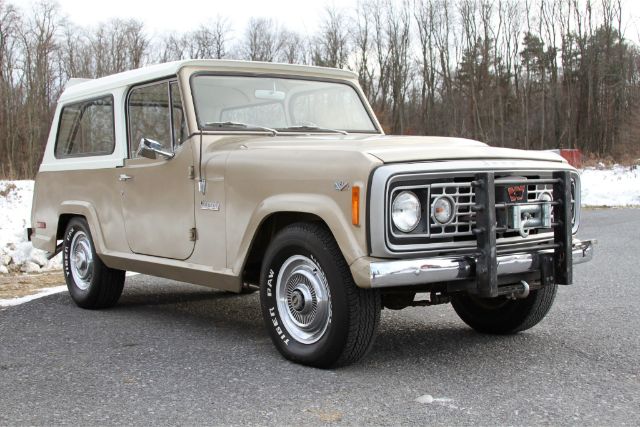 The Commando is a forgotten Jeep model they produced between 1966 and 1973. It was an upscale version of those pure off-road models that featured removable hardtops and a small truck bed behind the front seats. Also, the Commando was a practical model that drivers could use for cruising as well as carrying smaller items.

But best of all, they could take it off-road. Drivers had a wide selection of engines, from small inline four and six cylinders to V6 and V8 engines. AMC produced most of the engines because they owned the Jeep brand at the time. Also, Buick produced a 225 V6 they called the Dauntless V6. 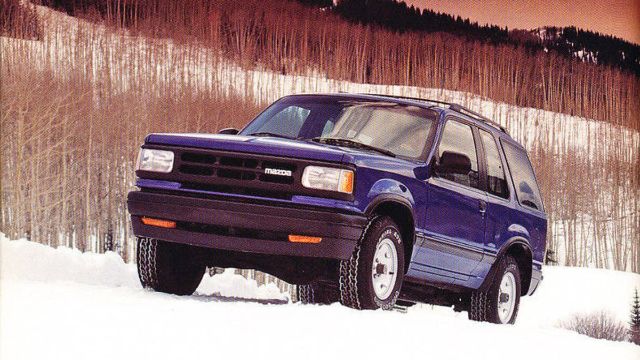 The original Ford Explorer from early â€˜90s was a tremendously influential and popular model despite its questionable stability. Back then, Ford had an interest in Mazda. Their marketing managers thought they could direct some sales to Mazda by introducing the Navajo.

It was a three-door Explorer with a Mazda badge on the grille. However, for some reason, the Navajo wasn’t that successful. So, people have forgotten about it nowadays. 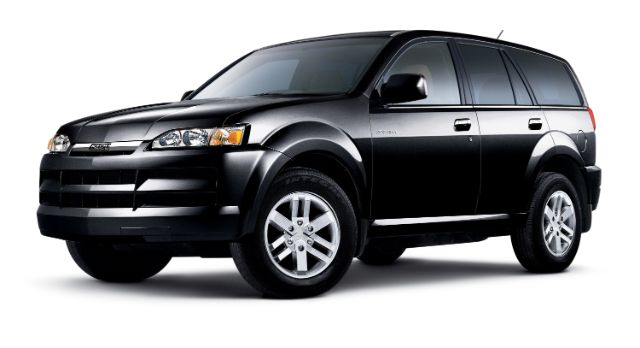 In the early 2000s, crossover SUVs started emerging on the market. Most of the companies presented such models, but after a while, the classic SUV form proved to be dominant and popular with the customers. But Isuzu was struggling to find its place in the market. They even played the crossover SUV card with the Axiom, which they introduced in 2002.

However, despite being a solid model with lots of usable features, the Axiom failed to capture the imagination of the crossover SUV buying public. So after just three years on the market, they discontinued it in 2004. 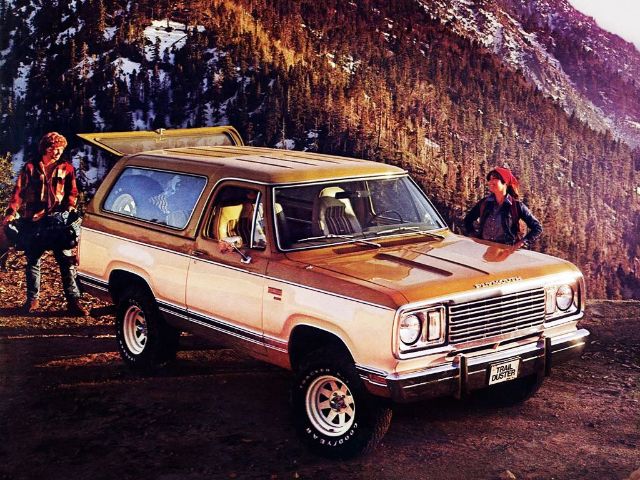 To promote the product in that market, Plymouth even offered all-wheel drive at a less expensive price and more equipment than the Dodge. But it had no luck, so after a couple of years, they discontinued the Trailduster, although the Ramcharger stayed on the market. 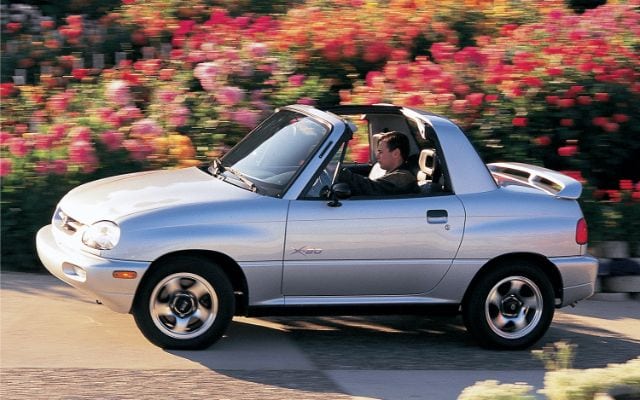 How about a two-seater, two-door SUV with compact dimensions and a removable T-Top? It that sounds insane, but that is exactly what the Suzuki X-90 was when they introduced it in 1995. Powered by a 95 HP 1.6-liter four-cylinder, the X-90 offered rear-wheel drive as standard or an optional all-wheel-drive model with limited interior and trunk space.

They officially sold the car in America. In fact, Suzuki managed to sell 7,000 copies, but neither the buyers nor the motoring press understood what Suzuki wanted to say with this model. The problem was, it wasn’t an off-roader and it wasn’t a roadster. 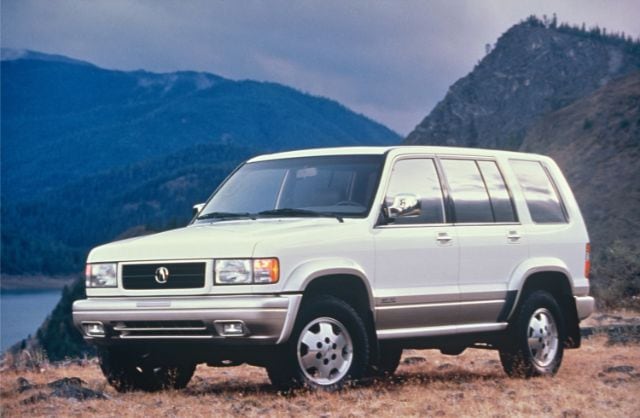 It looks like Acura didn’t have much luck with the first SUV models they produced in the â€˜90s. Back in the day, Acura concentrated on taking other company’s models and re-badging them with minimal differences from the original. And that is exactly what the SLX was. Acura took the design and most of the technology from the Isuzu Trooper.

The Trooper was a capable off-road SUV, but in the late â€˜90s, it failed to pass the crash and stability tests. And because of that, it affected the Acura brand. Unfortunately, few buyers ever purchased the SLX. Acura only sold it between 1996 and 2000. 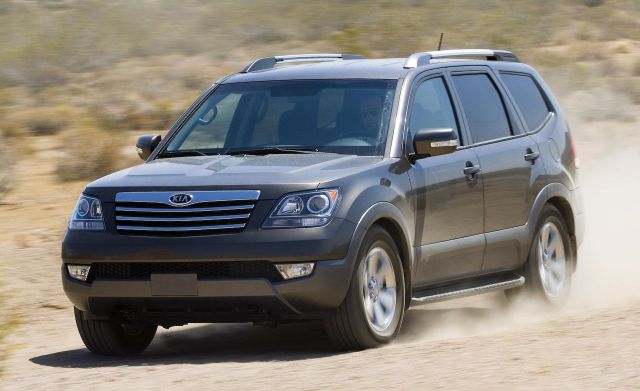 Kia debuted the Borrego in 2009 and some people say that the timing proved to be the reason for its poor reception. The Borrego was a full-size luxury SUV with V6 and V8 power Kia introduced just as the recession started.

Despite being more affordable than similar models from their competitors, the Borrego just wasn’t that good or even economical. The marked and motoring journalists were harsh to this car, so in just one year, the Borrego was history. 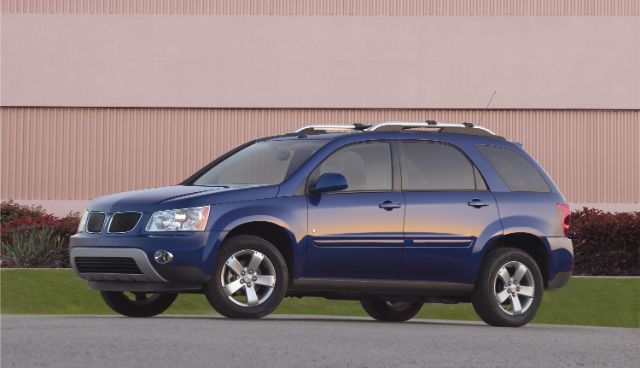 Pontiac presented the Torrent in 2006. It was one of their final attempts to make Pontiac profitable and save it from its demise. The car was the twin brother to the Chevrolet Equinox and it wasn’t that bad. However, with little money for styling improvements and a dull interior, the Torrent wasn’t appealing to the customers.

The problems with the Torrent was that it wasn’t all that exciting, but Pontiac was desperately in need of a game-changing model. Torrent wasn’t that, so they discontinued the rest of the Pontiac lineup in 2010. 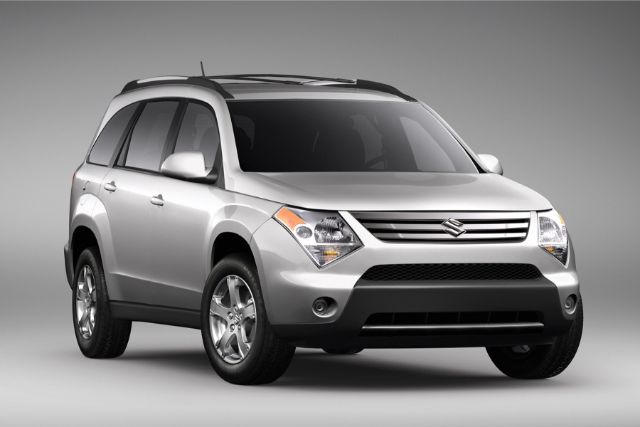 Suzuki is another company that left the American market due to poor sales. One of the reasons was a failure to position themselves on the SUV market. Suzuki did have a big success in the ’90s with the Sidekick and Vitara models, but the follow-up versions weren’t as successful.

When Suzuki revealed it in 2007, the XL7 was a bigger, more spacious model. But sadly, it failed to attract enough buyers. Due to its strange design and lack of interesting features, the XL7 wasn’t popular. So, just a few years later, they discontinued it. 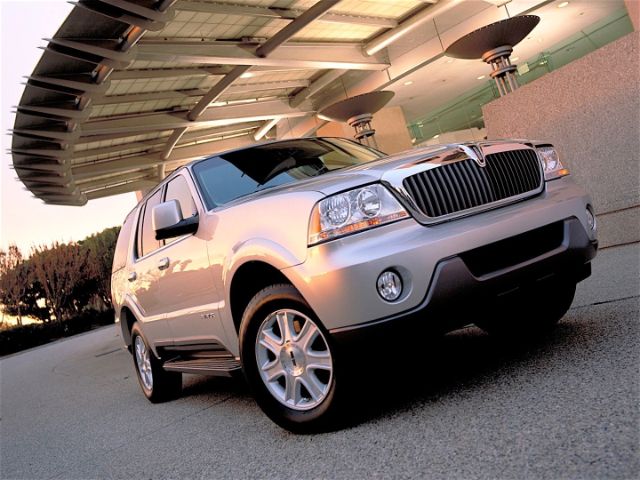 The idea behind the Lincoln Aviator was a good one, but Ford was too greedy and ruined the whole deal. The Aviator was Lincoln’s version of the popular Explorer. The Ford marketing strategists thought if buyers were willing to spend extra for luxury versions of the Explorer, they would be willing to spend even more for a proper Lincoln product.

However, it turned out that they were wrong, so the Aviator sold poorly. Soon, they withdrew it from the market. 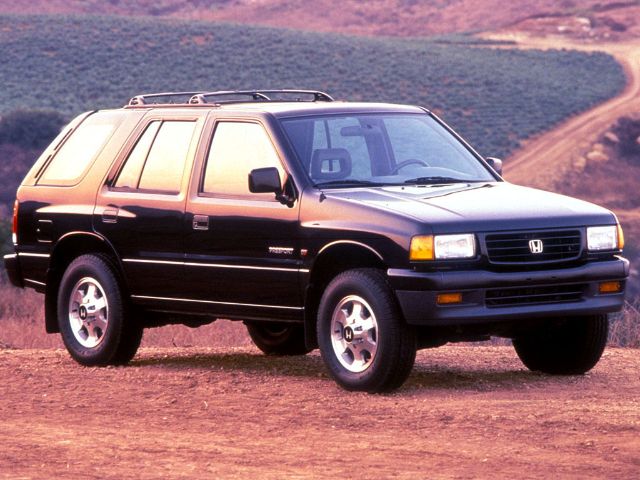 In the early â€˜90s, Honda needed an SUV to follow the current trends. But since they didn’t have anything to offer, they were forced to use other models and re-badge them as their own. And the Honda Passport was the first Honda SUV.

But in fact, it was an Isuzu Rodeo with an “H” on the grille and a higher price. Despite being an adequate model for the times, it wasn’t particularly interesting. Also, it lacked in refinement and features. And that is what made the sales so disappointing for the Honda Passport.

This list covered the 20 forgotten SUV models you will rarely see on the road. Which one appealed to you? Hopefully, you’ll be able to find one without any trouble since these are so limited and hard to find.