Ever since OJ Simpson ran from the LAPD in his white Bronco, televised car chases on live TV have been extremely popular in the US. Thousands, if not millions of viewers statewide could witness chaotic driving straight out of action-packed movies without leaving their couches. Many of these televised chases featured amazing scenes of swerving through highway traffic, evading the police in the most reckless ways possible, and of course, high speed crashes and arrests, which made them fun in the first place.

But, it’s not always triple digit speed that raises the pulses. One 18 year old felon from Kankakee, Illinois proves that in the most intense low speed chase in recent years. The male perpetrator stole a bulldozer from a construction site in August 24th 2017 and went on a joyride. Unfortunately for him, an off-duty officer noticed the bulldozer cruising the empty streets, and the chase was on.

The police did everything to stop the rampart teen

The officer notified his on-duty colleagues who quickly responded, and started chasing the fugitive in the bulldozer. Now, a bulldozer isn’t exactly a fast vehicle, but it’s main virtue is strength. Combine that with determination of the driver, and havoc just has to happen!

The fugitive was so adamant to escape, that he smashed a police car in the process. Without a patrol car, the police continued pursuing him on foot. The pursuit continued in slow pace, but was very intense indeed. The policemen eventually managed to pull the felon out of the bulldozer and stop this slow-paced terror by arresting him. Prior to being detained, the perpetrator was tazed, and then transported to the hospital. 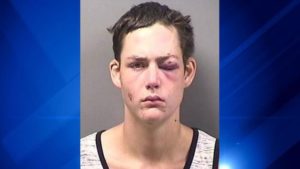 To everyone’s surprise, the perpetrator was just 18 years old. Yet, to no one’s surprise, he was heavily intoxicated. The police identified the felon as Austin White of Bourbonnais, Illinois, and his mugshot is painfully hilarious. The photo shows White with scratches and bruises and a black eye, staring at the camera with a confused look on his face.

Although White thought that his Grand Theft Auto stunt is a hilarious idea, the state got the last laugh. White is currently facing multiple felony charges, including attempted murder and, quite obviously, driving under the influence. To top it all, White didn’t even have a valid driver’s licence, but we bet that’s the least of his problems right now.

Everything about this chase is so ironic, since White drove at only 5 MPH, yet he was able to evade the police for quite a while. And how did he even get the bulldozer going? Unlike cars, machines like that operate in a weird way, and are much harder to drive than an average automobile. So many questions arise, but they all come to just one â€” why, man?

While we believe that everyone should get the punishment he deserves, we can’t help but feel sorry for the 18-year old. A young and intoxicated mind is full of crazy ideas, and this is definitely one of them. Even though there was a lot of damage, at least nobody got hurt. Well, except for White, but he kinda had it coming.