The original idea behind the muscle car class was to offer inexpensive, yet powerful, fast cars with youthful appeal and loads of attitude. And the early muscle cars were exactly that. They were simple, affordable factory hot rods that provided tons of fun at low prices. Back in the day, you could have a world-class performance machine for less than the price of a well-optioned family sedan or station wagon.

To put that into today’s perspective, imagine owning a 500 HP performance car for the price of mid-sized family SUV. However, once the classic muscle car era passed, those high-powered beasts became collector’s items, so their prices rose steadily over the years. But back in the â€˜90s when prices jumped for the first time, you could buy a real Hemi car for $20 to 30,000, which was a lot of money for old Mopar.

Today, those original Hemi cars are several hundred thousand dollars, and some even cost over a million. However, they are not the only ones bringing big bucks at auctions all over the country. So read on to find out about the 20 most expensive classic muscle cars ever to cross the auction block. 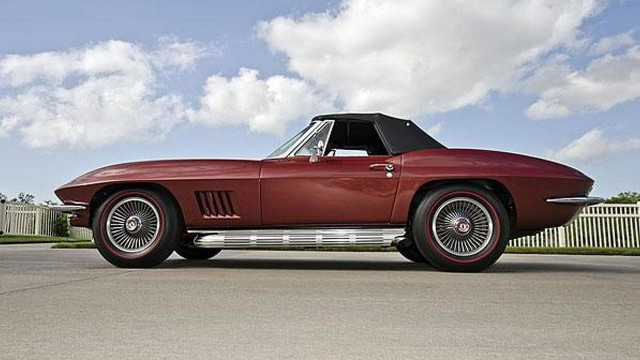 Chevrolet produced the C2 Corvette from 1963 to 1967, so they are highly sought after by collectors. The big block models they introduced during the 1966 model year are the most expensive since they combine big power with unique styling. Among those cars, the L88 has a mythical status and enormous price tag. They only built 20 1967 Corvette L88s and one recently sold for an amazing $3.2 million. 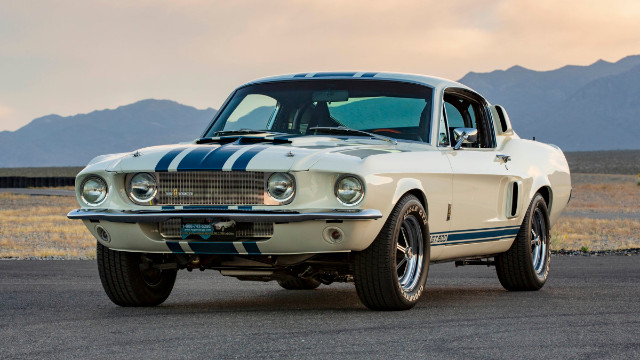 This unique Shelby GT500 was meant to be a rolling laboratory to showcase the possibilities of the Mustang platform, as well as for testing Goodyear’s “Thunderbolt” tire line. It had a Le Mans-winning GT 40 race engine, special transmission, suspension, and tires. But most interesting of all is that they only build one of them. Although there were plans for a limited production run, the proposed price was over $8,000, which was an enormous sum in the late â€˜60s. Recently, this sole example sold for $1.3 million. 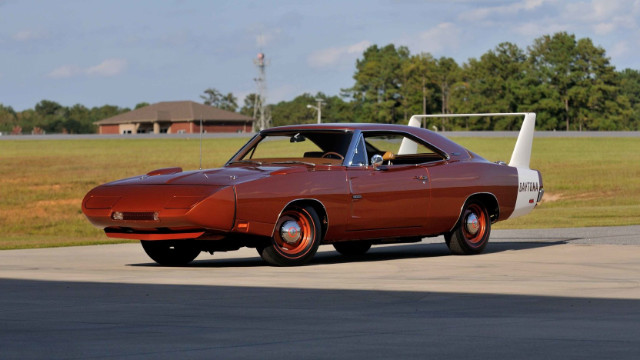 Dodge wanted to go racing in NASCAR and the Charger was the perfect candidate. Since NASCAR cars already approached high speeds of almost 200 mph on the newly-constructed superspeedway tracks, aerodynamics played a key role in performance and results. So, Dodge decided to create a racing car with a special front end, flush rear glass and a big rear spoiler.

The Charger Daytona was one year only model. They built 504, most with a 440 V8 engine, but only a handful with the 426 Hemi engine option. So, if you want one of these cars, be prepared to pay almost one million dollars. 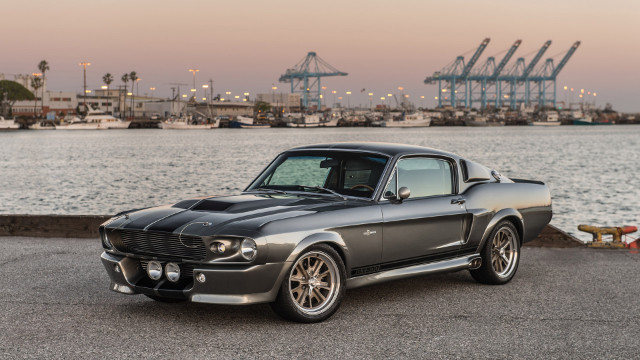 Would you pay a cool million for a Mustang? There were times when something like this would be impossible, but the most expensive and fantastic cars have already gone over that number. So, in May 2013, the famous car from the Gone in 60 Seconds remake sold for a million bucks, making history for the infamous Mustang. This car wasn’t the only Elenor they made for shooting, but it was the car they used for filming and promotional shots. 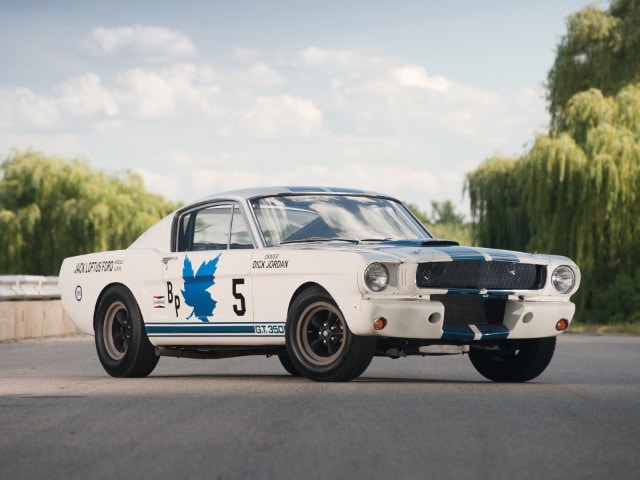 Carroll Shelby built only 36 fire-breathing pure racing Mustangs for the 1965 model year. Each of those examples had numerous wins under its belt. Every R model is an extremely valuable piece of Mustang and racing history. They rarely come up for sale, but when they do, they achieve astronomical prices.

And that was the case in 2012 when a highly-original GT350 R sold for almost $1 million. This car with only 4,900 miles on the clock and its original transmission and engine, as well as all the important parts was infamous among Mustang aficionados. 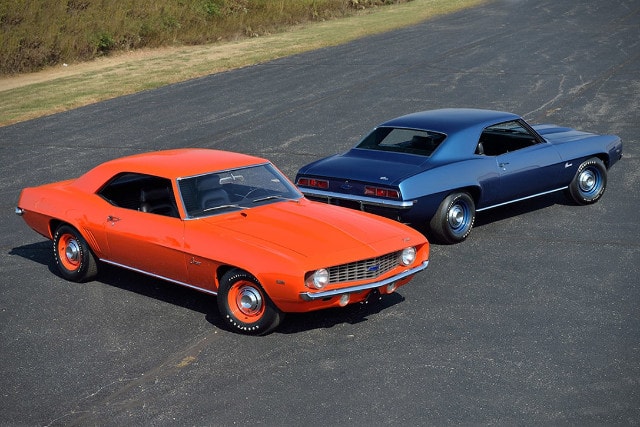 The COPO Camaro ZL1 was a secret Chevrolet drag racing special they designed to fly under the radar due to the corporate ban on racing. They sold it exclusively as a special order throughout their performance dealerships at a hefty price tag. But the car was unbeatable on the track and famous for its all-aluminum ZL1 427 V8 engine. Chevrolet only built 69 of them, so if you want one to add it to your collection, be prepared for a $1 million dollar price tag. 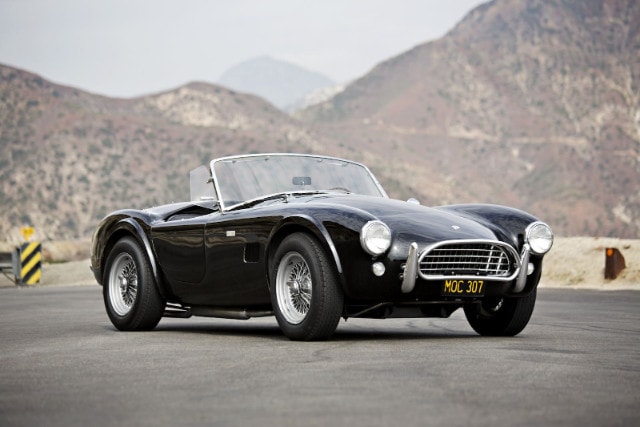 The story of the Shelby Cobra 289 is widely known, but it’s still interesting enough to tell again. In 1962, Shelby used an AC Ace body and installed a Ford 289 V8, creating one of the first Anglo-American hybrids as well as one of the best sports/racing cars of the period. The Shelby Cobra became an enormous legend among car enthusiasts. Due to its limited production and high collectivity, prices at the auction goes well over $1 million. 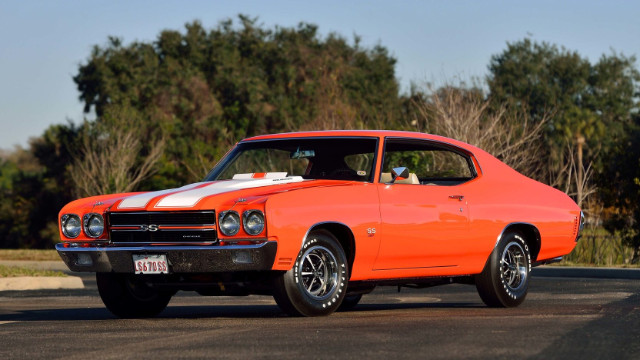 The Chevrolet Chevelle was a popular muscle car with its combination of an affordable price, nice design and powerful engines. So, for 1970, Chevrolet offered an expanded line of engines including the famous 454 V8 big block. They called the regular version the LS5 and it was powerful.

But there was an even stronger LS6 variant, which they installed in just 3,700 cars. The LS-6 had an almost racing compression of 11.25:1. Also, it used a bigger carburetor and much stronger engine internals. Although they rated it at 450 HP, it is more likely that it produced over 500. 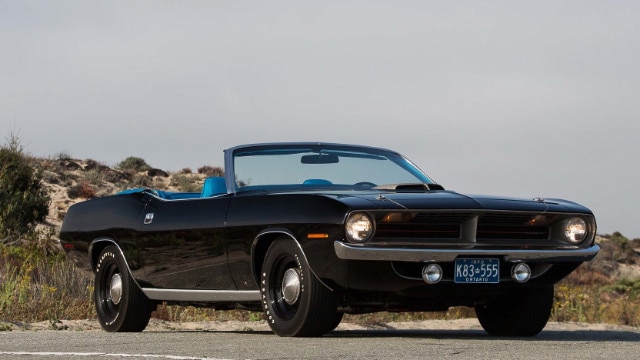 Two of the biggest Chrysler legends from the classic days of muscle car culture are the Barracuda and the 426 Hemi engine. All through the â€˜60s, those icons of the industry didn’t mix, at least not in street legal cars. But in 1970, Plymouth offered this legendary engine in a Barracuda body style to create one of the fastest, most desirable muscle cars they ever made.

The mighty Hemi engine was an expensive top of the line option for 1970 and 1971 available in coupe or convertible form. It cost around $900 over the price of the standard Barracuda and they installed it in just about 600 coupes and only 17 convertibles during the two-year production period. Today, the price for those 17 cars range from two to four million dollars. 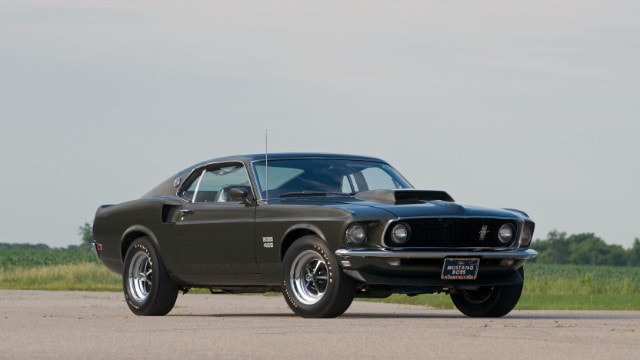 Getting $605,000 for any car is an amazing achievement, let alone for the Boss 429. Despite its rarity and mystic allure, the Boss 429 never achieved such a high amount. This number is recorded for the Boss 429 cars. But one of them had a NASCAR engine with special Ford C9AE-A heavy-duty half-inch bolt rods, forged pistons, and a steel crank, among many other factory options. Best of all, they perfectly restored and well documented the car. 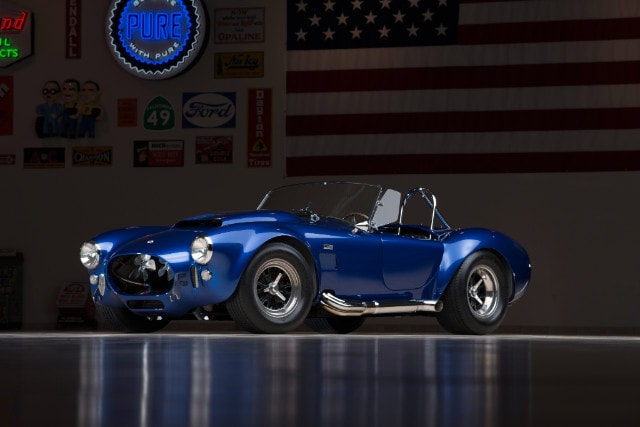 Ford only built two Super Snake Cobras and both featured a highly tuned 427 V8 engine with a supercharger on top. And that provided the driver with almost insane levels of power and performance. In fact, too much power proved to be a deal breaker for most customers because just a few people could handle such a car. However, one of the two they produced recently sold for over $5 million. 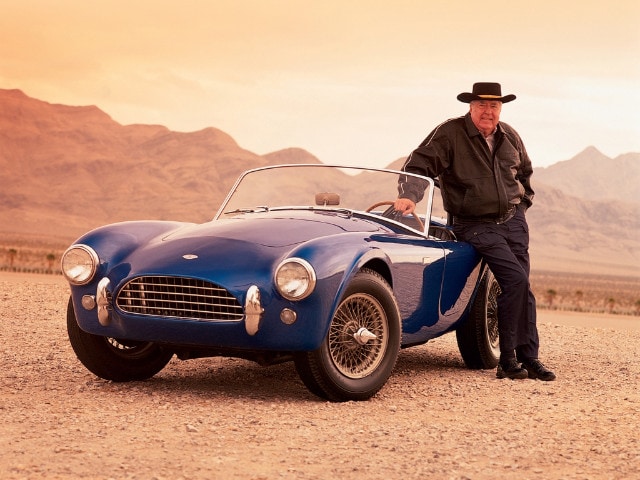 You are probably asking why the early 1962 Cobra 260 is more expensive than the first 10 cars on this list altogether. So, what is the deal with this extremely expensive car? Well, the CSX2000 is the first Cobra Carroll Shelby ever made. Also, it was in the personal fleet of Shelby for decades.

It was the first magazine loaner, publicity shot car and demonstration model that many famous names drove, too. Basically, this Cobra is an enormously important part of American car history, which justifies the price. 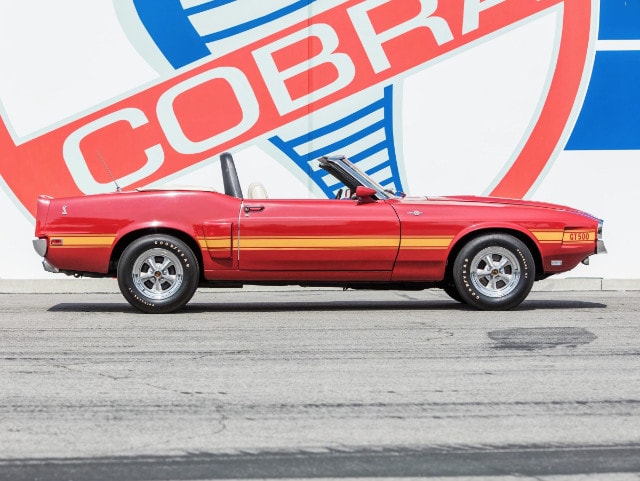 If you can’t afford the CSX2000 at almost 14 million dollars, but you need Carroll Shelby’s personal car, there’s a more affordable solution for you. It is the 1969 Shelby GT 500. Shelby used the car for a few years, and they even featured it in a number of period shots and ads. And that is why they sold it for much more than the average price for a Shelby Mustang of that vintage. 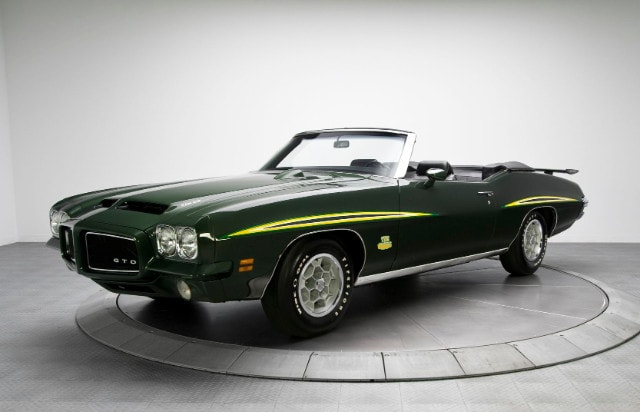 By 1971, the end of crazy muscle car segment was in sight. The government started tightening its grip on the segment, so cars started losing their power and appeal. But one of the last true muscle car convertibles was the 1971 Pontiac GTO Judge with a powerful 455 V8 engine and ragtop. Pontiac made only 17 of them, so that’s why they are worth so much money. 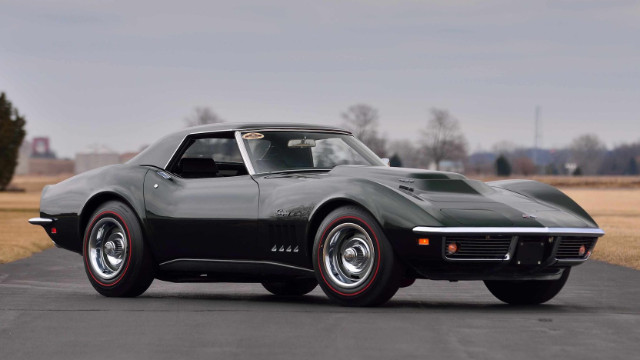 Although an L88 Corvette was the first item on this list, here is a later C3 model Chevrolet introduced in 1969. It used the same basic mechanics and drivetrain components including the powerful 427 V8 engine. So, why is the 1969 model much less expensive than the 1967 version? Chevrolet made 116 L88s 1969, which was much more than just two years earlier. 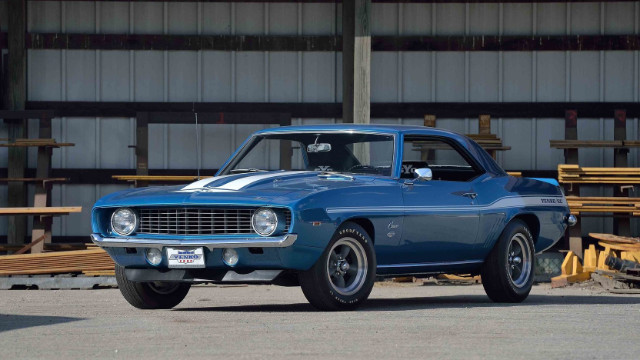 In 1967, Don Yenko started converting the Camaro SS into 427 Camaros to sell as Yenko Super Cars. In addition to more power, wild graphics and a long list of optional extras, Yenko even offered a factory warranty and heavily promoted his models.

And that is why Yenko Camaros were the most popular choice if you wanted a custom 427 V8 conversion on your regular SS. Today, those original Yenko cars from 1967 to 1969 are rare and highly collectible. 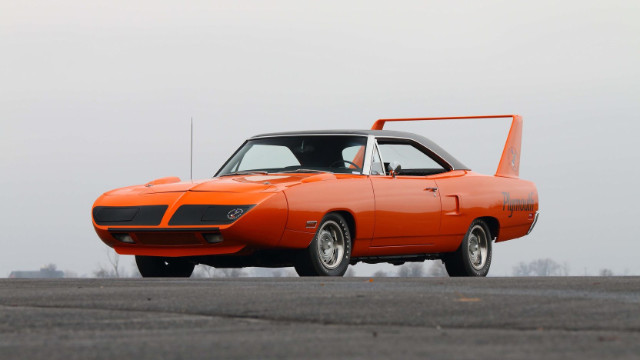 As one of the craziest muscle cars they ever produced, the Superbird has one of the most recognizable graphics packages ever. The Superbird was an attempt to win the famous Aero Wars in the late â€˜60s to early â€˜70s NASCAR championships. In order to homologate the car for racing, Plymouth built just under 2,000 road-going Superbirds, selling them all over America. Most came with 440 V8, but those that came with the 426 Hemi are quite expensive. 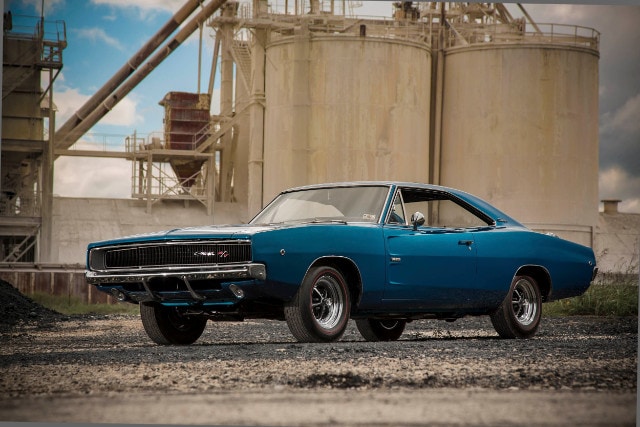 In 1968, muscle car fans were wowed by the fantastic lines of the new Charger. It featured the popular “Coke bottle” styling, big grille, muscular shape, recessed rear glass, and four round rear lights. In those days of crazy designs and aggressive muscle car styling, the 1968 Charger was in a league of its own.

In fact, no other model could compete with this coupe. Of course, the top of the line model was the R/T with 426 Hemi engine. But they only built 475 of them, which explains the high price they achieved at the auctions recently. 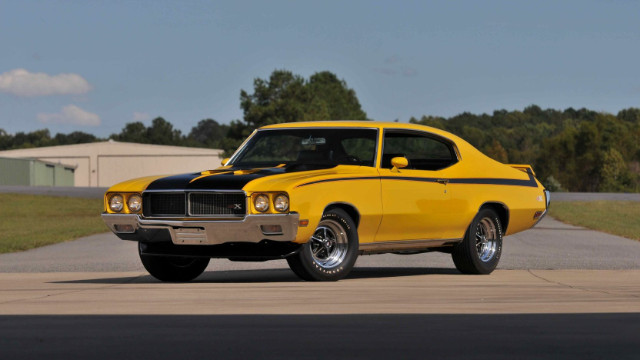 The 1970 model year was a watershed year for American muscle and performance models. Never before or since have there been so many great models available. Backed by steady sales and the great reception of their muscle models, Buick decided to introduce the ultimate muscle car.

They wanted it to be in the form of the legendary and scarce Buick GSX. For long, this car was in the shadow of more popular machines. But recently, the prices have started to go up. The reason is that the GSX is a rare car since they only made 678 of them in 1970. 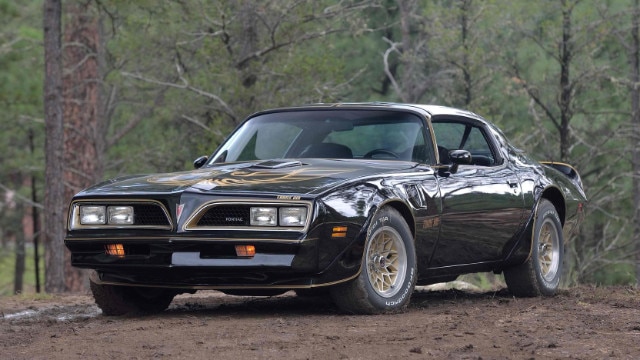 The legendary 1977 comedy movie, Smokey and The Bandit, not only promoted Burt Reynolds into the biggest movie star of the period, but it also helped the Pontiac Trans Am achieve legendary status among car enthusiasts. Over the years, Pontiac produced several special versions with the legendary gold and black color scheme. But there is only one original promo car, which sold in 2016 for over half a million dollars.

These are the 20 most expensive classic muscle cars that ever crossed the auction block. So, if you want one of these, you’d better have a huge bank account. Even so, they are worth the money since they are so rare. All of them hold a special place in automotive history.