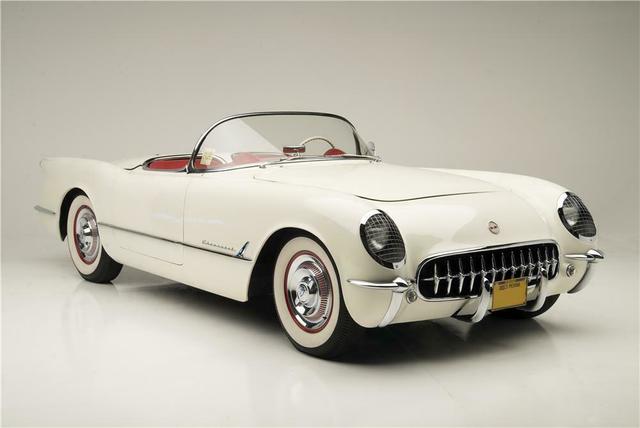 The introduction of the Chevrolet Corvette was big automotive news for 1953 since nobody expected Chevrolet to build such an exotic car. All of a sudden, there was a new roadster with incredible features a mid-class manufacturer with no sports car experience has offered. However, despite that, the first Corvette was a well-designed, well-executed model.

But the most interesting thing about the new Corvette was the fiberglass body. Back in the early â€˜50s, plastic was still the material of the future, which was rarely used in the industry. The Corvette was the first car with a fully plastic body, making Chevrolet one of the pioneers of fiberglass construction. This incredible innovation gave the Corvette its lightweight construction. And from that day, they’ve made the â€˜Vette body out of fiberglass.

Under the hood was an inline six engine they called the “Blue Flame.” It featured 3.9-liters of displacement and a modest 136 HP rating. The engine came from Chevrolet’s standard lineup, although they also equipped it with three Carter carburetors. The Chevrolet engineers tried to keep the cost down by borrowing mechanical components from other vehicles and using them on the Corvette.

With the price of $3,490, the 1953 Corvette was pricey, yet it was more affordable than a Jaguar XK120 or a Ferrari 166. However, despite the interest from the public the first year, they only made 300 Corvettes, all in white with a red interior. However, the 1953 Corvette marked the start of American sports cars production. And better yet, it was one of the most successful U.S. nameplates they ever produced.